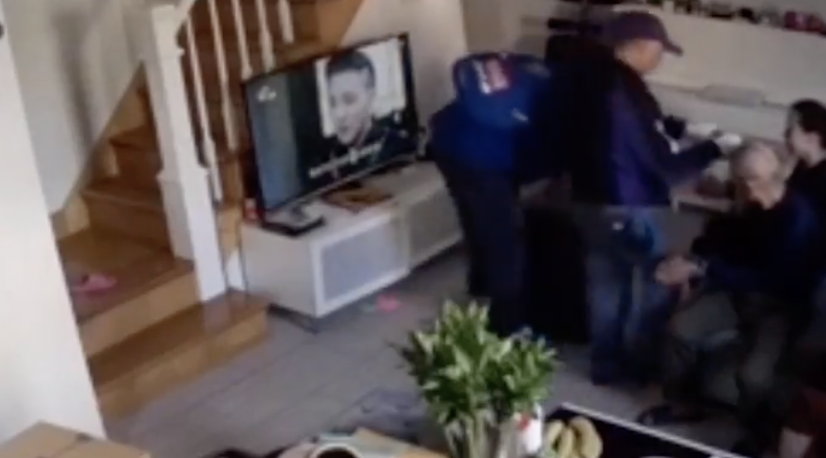 A Brooklyn, New York was out in his backyard playing with his model train set when he heard a loud bang. Gary Baxter and his wife Joanne Nguyen, who joined him in the backyard after hearing the noise, saw two men leaving their neighbor’s backdoor with a safe. The men pushed the safe out of the door and down the driveway to a waiting blue Jeep Cherokee, according to Baxter.

Baxter, who was shirtless and wearing swim trunks at the time, as one does when playing with a model train, snapped a picture of the getaway car and then headed into the burglarized home to check on his neighbors. He found them bound and gagged.

The victims were an 81-year-old man, his 75-year-old wife, and their 36-year-old daughter. By the time Baxter entered the apartment the daughter, who was bound at the feet as well as her hands, had already partially freed herself. The daughter’s parents were still restrained and sitting on the sofa, however.

Surveillance video on the home’s front door and inside the home showed that a burglar was able to gain entry by pretending to be from FedEx. After he entered an accomplice followed. The video then shows the burglars tying up their victims and demanding that they open the safe. After the burglars leave the home the 36-year-old daughter gets up and hops across the room in an attempt to locate something.

That had to be a surreal afternoon for everyone involved. One minute you’re in your house watching TV, the next thing you know the FedEx guy is wrapping duct tape around mouth and hands and then, after that, your neighbor you never talk to busts in shirtless, smelling of model trains, and unties you. That’s a real whirlwind of a day.