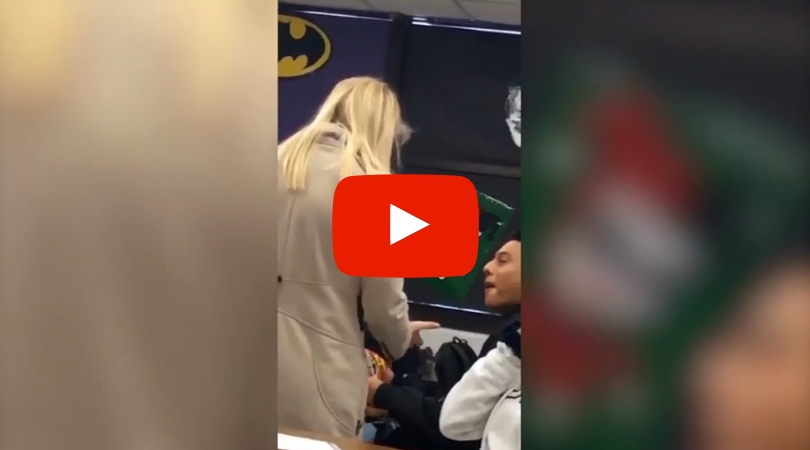 I really don’t get teachers who think they can just blurt out what they think is correct and expect no consequences from it. Especially if what is going to come out of your mouth is racist. Like this El Paso, Texas High school substitute teacher who was caught on camera telling a Spanish-speaking boy to speak English. So basically, she was caught being racist. Let’s not beat around the bush.

In the video, the teacher can be heard saying, ?Speak English. We are in America.? right in the middle of a busy classroom. Go ahead lady, just keep making those racist remarks to show what type of person you are.

Socorro High School student Carlos Cobian said he walked into class watching the Argentina vs Uruguay soccer match on his cell phone. He said the teacher then asked him to hand over the device to which Cobain responded, “¿Por qué?” which means “Why?” in English.

That’s when the teacher allegedly made a comment that caught the student off guard. He said he was shocked and a little mad, and thought she was racist because he lives on the border. He stated, “For her to come to teach at Socorro, being a sub, like 90% of the students here are Mexicans and Latinos.”

The Hispanic student says he still doesn’t understand why the teacher decided to single him out when other students were using their phones as well. The Socorro Independent School District stated students can use their cell phones for instructional purposes while on campus but must have the teacher’s permission.

The district is also looking into the incident after it went viral on social media. They did note the appropriate actions for their employee code of conduct policies will be taken against the Texas teacher.

Whether this school is on the border or not, I don’t have to remind you why this is so wrong. Some students struggle so much trying to learn a new language that sometimes all they can do is use their native language because they’re afraid people are going to make fun of them. This teacher telling the student to speak English was just wrong. Sure the school is in Texas, but do you know how many Hispanic people are in Texas? It makes my blood boil seeing teachers use their power like this. Over it.