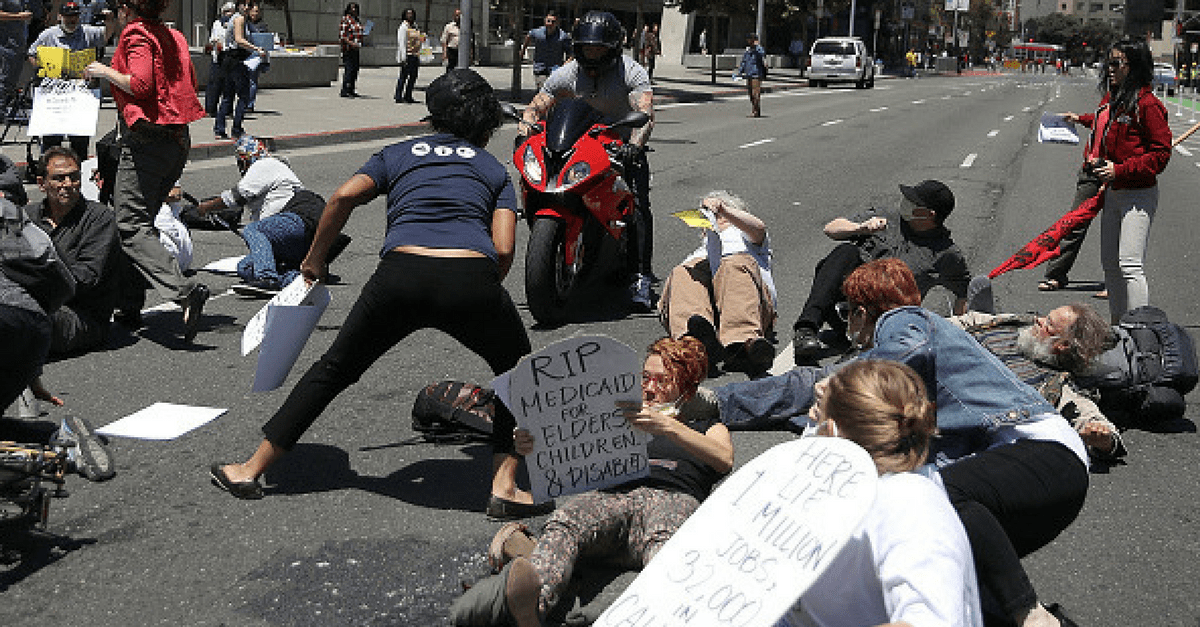 Photo by Justin Sullivan/Getty Images
SAN FRANCISCO, CA - JUNE 21: A motorcyclist rides through dozens of healthcare activists who were blocking a street while staging a die-in as the protested the Trumpcare bill on June 21, 2017 in San Francisco, California. The man narrowly missed the protesters on Seventh Street. Dozens of healthcare activists and senior citizens staged the protest outside the San Francisco Federal Building to express their opposition of the American Heathcare Act bill that is being drafted behind closed doors by Republican senators. (Photo by Justin Sullivan/Getty Images)

During a protest against the GOP healthcare bill in San Francisco, a man allegedly rode his motorcycle through the crowd of protesters on purpose and was later detained by police.

Protesters had gathered outside of the San Francisco Federal Building that afternoon to conduct a “die-in,” in which nearly 20 people lay down the street to block traffic. That’s when the man drove up the wrong side of the road on a red motorcycle.

RELATED: A car ran over a protester who was blocking the street and cursing at the police

“Everyone thought he was just confused, but he didn’t stop, and at some point it became clear he was going to come through the crowd and people jumped out of the way,” Emily Lee, a spokeswoman for the group Bay Resistance, said. “He was definitely targeting us. It was unclear if it was for political reasons or if he was just mentally unstable or what, but it was terrifying.”

According to Lee, the man then turned around and drove back through the crowd. However, federal police officers had already arrived and ordered him to stop. When the man failed to obey their orders, one officer pulled his gun on him. Luckily, no one was injured.

The suspect is currently in police custody but has not been charged yet.

RELATED: A road rage incident almost turned deadly after a motorcyclist and a driver got into it