Menu
Follow us
Search
Menu
Search
President Donald Trump presents Capitol Hill police Officer David Bailey the Medal of Valor during a ceremony to recognize the first responders from the June 14 Congressional baseball shooting, Thursday, July 27, 2017, in the East Room of the White House in Washington. (AP Photo/Evan Vucci); This image from House Television shows House Republican Whip Steve Scalise speaking on the House floor of the Capitol in Washington, Thursday, Sept. 28, 2017. To hugs and a roaring bipartisan standing ovation, Scalise returned to the House on Thursday, more than three months after a baseball practice shooting left him fighting for his life. (House Television via AP); WASHINGTON, DC - JULY 27: U.S. President Donald Trump presents the Medal of Valor to U.S. Capitol Police officer Crystal Griner during an event in the East Room of the White House recognizing the first responders to the June 14 shooting involving Congressman Steve Scalise July 27, 2017 in Washington, DC. Scalise was among four people shot by James Hodgkinson during a congressional baseball team practice. (Photo by Win McNamee/Getty Images)

House Majority Whip Steve Scalise (R-La.) thanked the two members of his security detail who were shot while protecting him, other Republican congressmen and aides when a gunman opened fire during a June baseball practice in Alexandria, Va.

Scalise returned to Capitol Hill with crutches on Thursday following his release from the hospital. He addressed his colleagues in a speech before saying “I want to specifically mention Crystal Griner and David Bailey.”

Following a standing ovation, Scalise explained that Griner and Bailey, both who he describes as part of his family, were assigned to his security detail on the fateful morning. He recalled laying on the ground and praying that they would be able to carry out their duties. Just after the prayer, Scalise heard “a different caliber weapon,” knowing that Griner and Bailey were engaging the gunman.

RELATED: A Nebraska Democrat official is out of a job after making a truly appalling comment about Steve Scalise

Scalise thanked them on behalf of himself and several others in the room for acting quickly, “even after being shot both themselves.”

“David, you are my hero. You saved my life,” he added.

Though Griner was unable to be in attendance, Bailey stood to receive the thanks. Griner, Bailey, and three Alexandria Police officers received the Medal of Valor by President Trump for their heroic actions during the shooting. 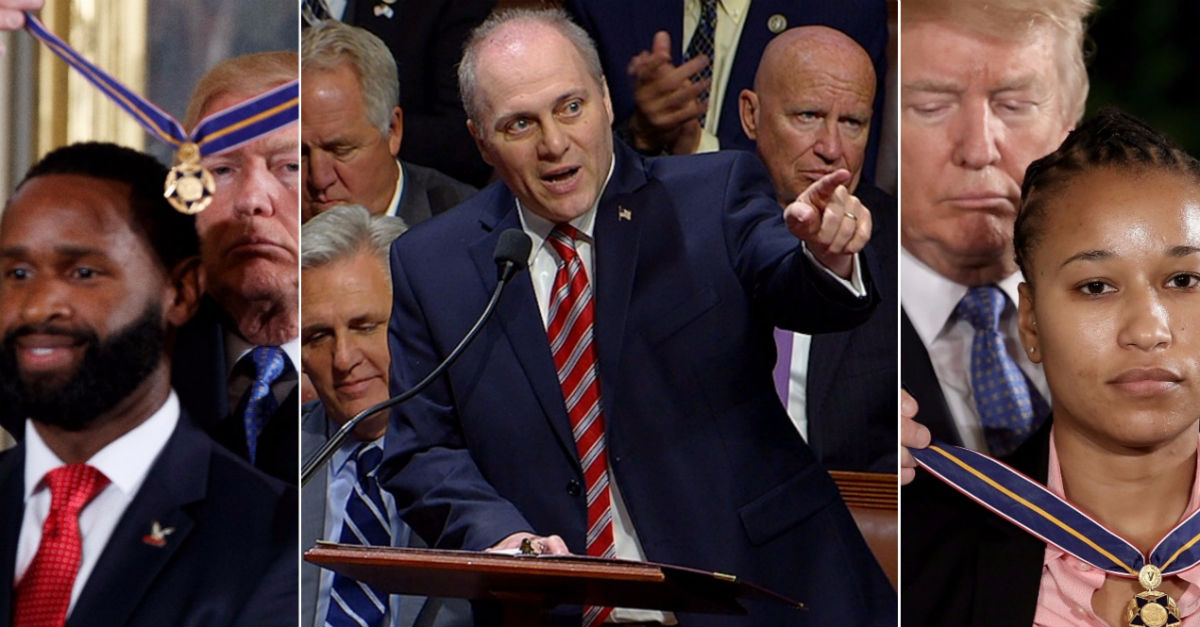