All Out Pizza Place Brawl Starts Over Missing Phone, Continues For Even Dumber Reason 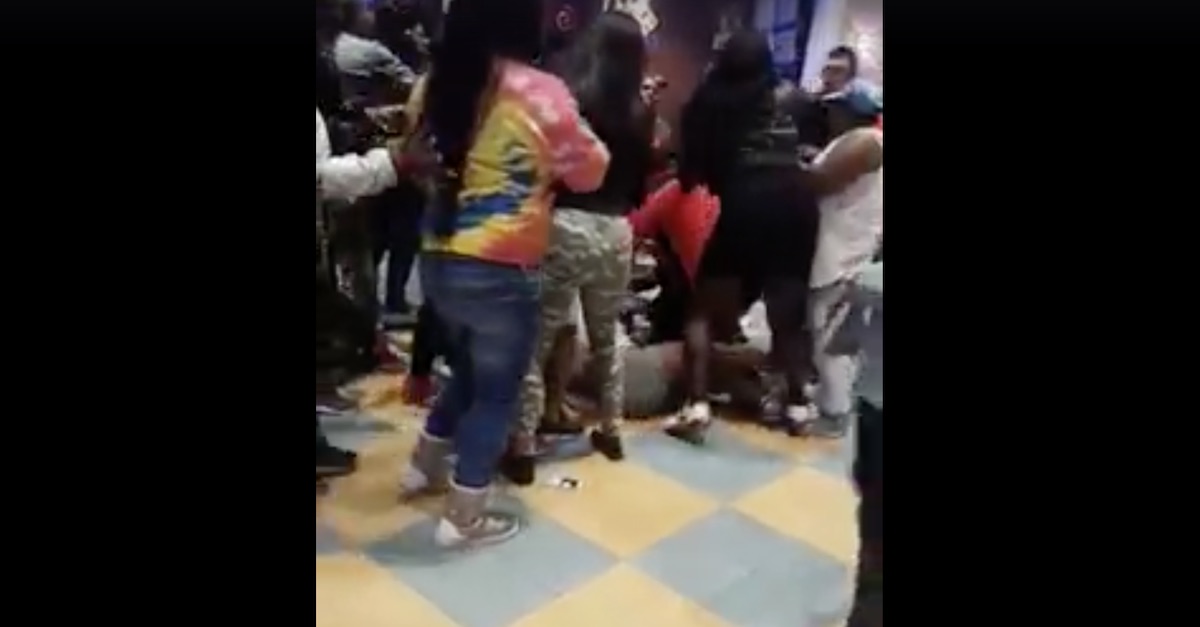 We’ve seen brawls erupt for any number reasons, even reasons as basic as two girls fighting over the same boy, but the one that erupted at a pizza place in Newark, Calif., it turns out, happened for no reason at all.

Nicole Davis filmed the comedy of errors that unfolded by the buffet line at John’s Incredible Pizza Company inside the NewPark Mall and it shows bodies flying and tempers flaring.

She told SFGATE that pepper spray was used by police and was sickened that her kids had to see this.

“It was a horrible experience,” she said. “I made sure I protected my kids until they cleared the way so we can get out, but I just hated the fact they did this at a family establishment. It makes me sick that my kids had to see that and all the kids that were scared crying.”

After the dust settled, kids could be seen inspecting various items that were left behind on the floor. These items included weaves, to give you any idea of the kind of fighting that was going on here.

But here’s the kicker: this fight broke out over a missing iPhone and a huge misunderstanding was caused by the use of the Find My iPhone app.

NBC Bay Area reported that the mother of a girl whose phone was last asked if someone there had the missing device. Here’s where the Find My iPhone app comes in.

The family believed that someone in the area had the phone because the app led them to the location. But the phone was actually one floor above sitting safely in the lost and found.

Restaurant workers were stunned by how quickly this spiraled out of control. One of them said boyfriends swooped in to provide back up.

Lynn added that a little more patience would have done wonders.

“We would have definitely found the cellphone, if they would have just given us a little bit of time and let us do our jobs instead of throwing punches,” the employee said.

No one was arrested and injuries sustained in the brawl were minor.

Watch: Adult Brawl Breaks Out in Children?s Area of Carnival Because of Course it Does