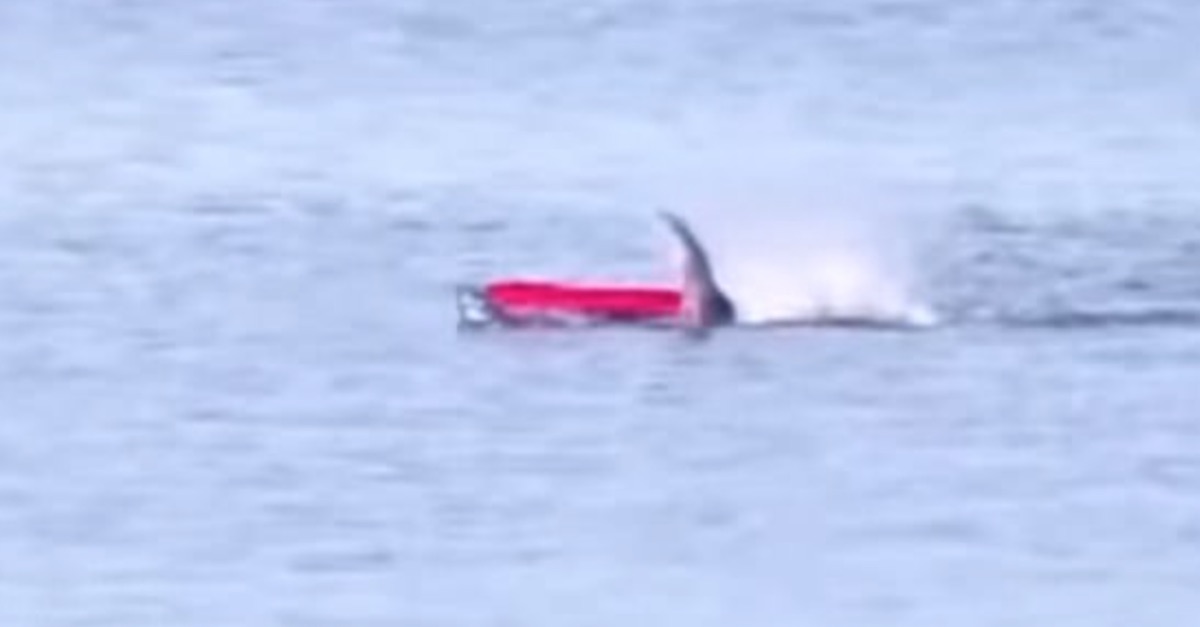 A video that is the stuff of anyone’s nautical nightmares shows a California man in a kayak getting flipped into the Monterey Bay as a Great White shark locked its jaws on his oar-powered vehicle.

The footage, which was filmed in March by a couple of witnesses, shows Brian Correiar, a certified scuba diver, having an unplanned encounter with a shark.

The toothy creature locked onto the 14-foot-long kayak and threw its captain into the bay. Gene Mace and his wife were recording when the attack happened.

Correiar thought he was dead meat.

“It all started with a bang,” he described to National Geographic about what happened. “Suddenly the kayak was launched into the air, and I fell halfway out of it. I began yelling,” he said.

“At this point, I was really nervous, I was sure I was done,” he said. “It was like a horror movie. The shark came toward me, dropped the kayak, then dove straight down below me where I couldn’t see it.”

If it weren’t for a nearby sailboat, Correiar very well may have been “done” because his calls to the Coast Guard for help hadn’t gone as planned.

Lt. Cmdr. Kyle Franklin was captaining the sailboat and was with his wife and daughter at the time. They brought Correiar to safety and also took the first steps to getting his kayak back.

In the end, there was no harm and no foul, but being in the water, hoping and praying that the shark wouldn’t end it all is something Correiar will never forget.

“I’ll be back in the water in no time,” he said. “I’m planning on taking more safety classes so next time — if in the rare case something like this should ever happen again — I’ll be even more prepared.”