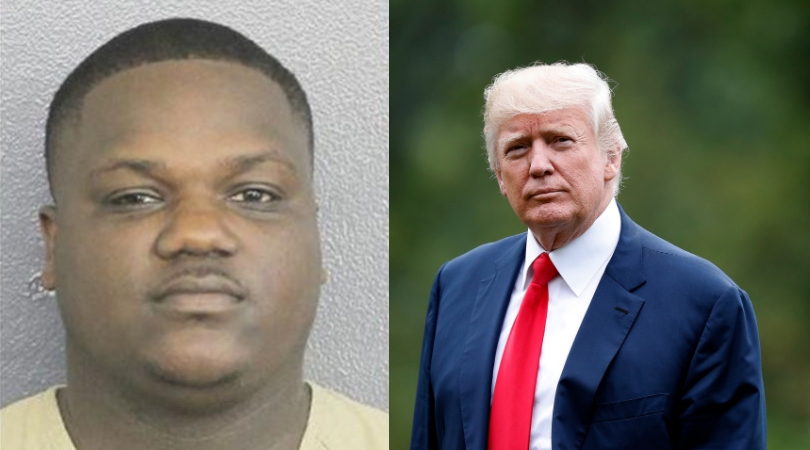 This man was definitely on some type of drug and I need to know what it was to make sure no one I know takes what he did. A Florida man, with cream on his face, a towel over his head, and a body covered with a shower curtain went live on Facebook threatening to kill President Donald Trump. Just a regular Friday afternoon.

According to federal authorities and a criminal complaint from the United States Secret Service, 26-year-old Chauncy Lump made the threats not long after President Donald Trump made a statement from West Palm Beach about the airstrike that killed a top Iranian general. Trump then moved onto another event in the Miami area later that night.

A Florida man threatened to kill President Donald Trump as retaliation for the U.S. military killing an Iranian general, posting a live video on Facebook where he stated "he killed my leader and I have to kill him", authorities said in court documents https://t.co/XZTvSN0s7Z

Federal Investigators stated that Lump used the name “BlackMan vs America” in the live video, which had Middle Eastern music playing in the background. Authorities also stated that he laughed while making some of the death threats.

The threatening statements made by the Lump included:

When questioned, the man told investigators he produced the video as a joke in response to the killing of Iranian General Qasem Soleimani. He also told authorities he had a bachelor’s degree in Homeland Security from Bethune-Cookman University. Federal agents couldn’t confirm the attendance for a semester.

Regretting his actions, Chauncy told U.S. officials he shouldn’t have done it in the first place. Which I mean, duh. Still, despite him apologizing and regretting it, this man is still going to see some heavy consequences.

Lump works as a security guard and had a Glock 9 mm semi-automatic pistol in his possession, which he is licensed to carry. Still, what a dummy. Do you think you can really threaten to kill the PRESIDENT on Facebook live and not get caught? I know Trump has his questionable moments, but this is too much.