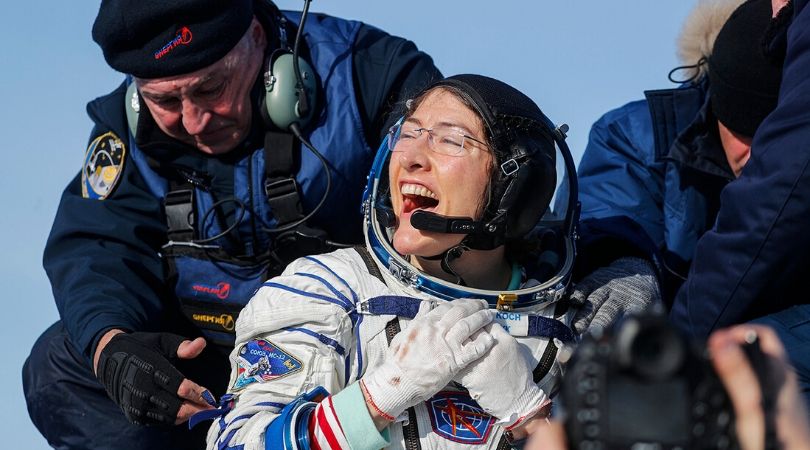 It’s official, U.S. astronaut Christina Koch is back on earth after her 328-day mission in Space! Talk about a record-breaking success! The 41-year-old astronaut landed safely in Kazakhstan with astronauts Luca Parmitano (of the European Space Agency) and Russian Cosmonaut Alexander Skvortsov. All of the astronauts had been staying at the International Space Station.

The return to Earth marked the end of a record-setting stay at the ISS for Koch. Her 10-month mission became the longest spaceflight for a woman, surpassing the previous record of 289 days that took place in December 2019. Adding on to her celestial milestone, Koch also participated in the “first ever-all female spacewalk,” alongside fellow NASA astronaut Jessica Meir. Back in October 2019, the two scientists ventures outside the ISS to fix a power controller which made history in the process.

Luckily for us, Koch was able to document her out of the world journey through social media and shared a few photos of some of her crewmates shortly before she parted ways with them. Through Instagram, she noted, ?I?m going to miss this bunch. Thank you, space family. #Expedition61.?

According to NASA, Scott Kelly was the only other American astronaut to complete a continuous spaceflight, clocking in at 340 days. Koch was born in Michigan and raised in North Carolina in the town of Jacksonville. She later became a graduate of North Carolina State University. Koch lived in Montana with her husband, Robert, and was selected by NASA to become an astronaut in 2013. She arrived at the ISS for Day 1 on March 14.

There is truly no place like our home: Earth.

According to NASA, it was a momentous day she “won’t forget soon.” Koch stated, ?That was the day that I have seared in my memory. Visions from when I first arrived here…I?m very privileged to have that as one of my favorite memories.? Koch’s mission is said to help researchers better understand the effects of space living on the human body, especially females, which will allow scientists in on future plans for any longer deep space exploration.

The astronaut did note that her mind and body adapted well to the environment, so much so that she had forgotten she was floated in. She stated, ?It?s been a huge surprise to see that life up here can actually become normal because of what our bodies can adapt to.? History in the making! Congratulations NASA astronaut Christina Koch!