Donald Trump’s interest in a D.C. military parade has the internet up in arms 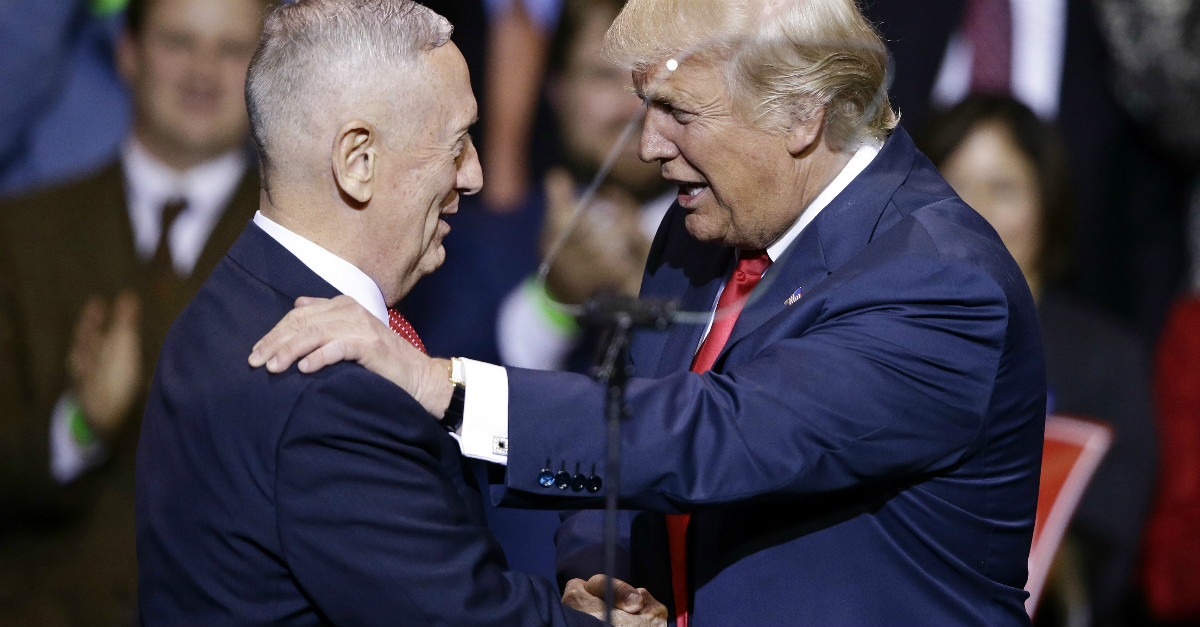 AP Photo/Gerry Broome
In this Dec. 6, 2016, photo, President-elect Donald Trump introduces retired Marine Corps Gen. James Mattis as his nominee for Secretary of Defense while speaking to supporters during a rally in Fayetteville, N.C. Trump’s choice for defense secretary was among U.S. military officials who the FBI concluded received anonymous emails from the woman whose affair with then-CIA director David Petraeus led to his downfall, The Associated Press has learned. (AP Photo/Gerry Broome)

President Donald Trump, the White House has confirmed, is interested in having the military parade through the streets of Washington, D.C., a revelation that has the internet up in arms.

NPR reported that a U.S. official confirmed that Trump requested that a parade be held to honor the military. White House press secretary Sarah Huckabee Sanders addressed that Tuesday, saying that it is true.

“President Trump is incredibly supportive of America’s great service members who risk their lives every day to keep our country safe.” she said in a statement. “He has asked the Department of Defense to explore a celebration at which all Americans can show their appreciation.”

In response to Sen. Dick Durbin?s comment that such a parade would be a ?fantastic waste of money,? White House legislative director Marc Short tells MSNBC: ?I?m not sure honoring the military is a waste of money.?

Short says it?s too early to know how much the parade would cost.

A Pentagon spokesman, Charlie Summers, says Pentagon officials are aware of the request and are ?looking at options.?

Others have criticized the parade idea on grounds that it’s the kind of thing Russia, North Korea and China would do.

Trump wants a military parade. Here's how other countries do it https://t.co/9I9B0zBb3j pic.twitter.com/PWNslfQF4H

The internet response has been negative.

There was already a #TrumpParade in DC. Not very well attended the first time, would be a waste of Pentagon time and resources the second time.
Photo: https://t.co/WYQprKDgNp pic.twitter.com/bFoNKhKKgd

Trump's silly "Show of Might" parade is predicted to cost $22 million (or 7 Mar-a-Lago weekends). But Trump flat-lined the annual budget of the Office of Government Ethics at $16 million, which is effectively a cut due to rising costs. Who's the Rocket Man now, @realDonaldTrump?

Guys, GUYS.
The parade idea is stupid. But imagining yourselves as play-acting out Tienanmen Square on Pennsylvania Avenue in front of US troops is not only stupid, it's the sort of hysterical over-reaction that makes people think Trump isn't so bad compared to you.

President Trump has requested a military parade in Washington, D.C. later this year. This hasn't happened in the U.S. since 1991, and is expected to cost millions of dollars. pic.twitter.com/kcsdoFfDA9

Republicans about spending money on food stamps for poor kids: “THE DEFICIT!!!”

Republicans about throwing a giant military parade because Trump wants one: “WHAT DEFICIT???”

Trump is so unpopular he is throwing himself a parade to satisfy his ego!