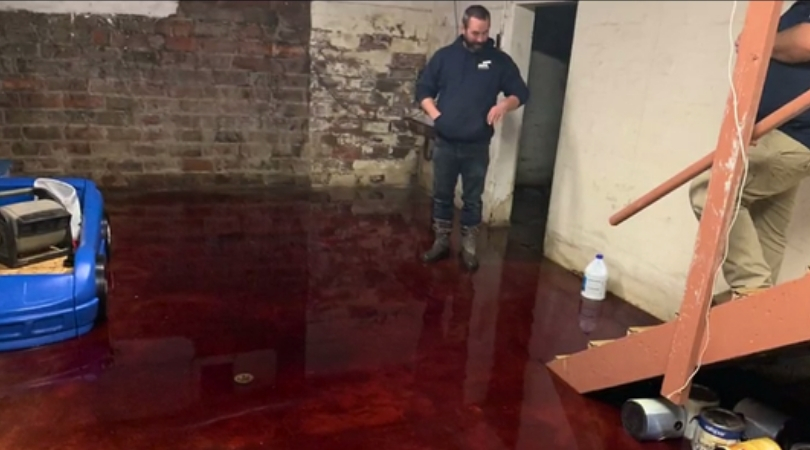 A family in Bagley, Iowa received the surprise of their life after they discovered their basement flooded…in blood! Yes, just in time for Halloween. It was the spooky decoration they never asked for, never expected, and never wanted.

The family was asked to leave their home after remnants from a nearby meat locker had leaked into their basement. Officials with the Department of Natural Resources said the home’s drainage system connected with the drainage system from the Dahl’s Custom Meat Locker nearby.

When the meat locker’s system backed up during a slaughter they were conducting, it slowly began to pour into the family’s home. Authorities stated the room was covered in 5 inches of blood and animal fat that seeped from next door. According to the Iowa Department of Natural resources senior environment Keith Wilken, the entire home smelled like a meat processing facility as soon as he entered the house. The source of the bio waste traced to a kill room where employees had flushed blood down the drain after killing hogs and cattle.

Luckily, the Dahl’s Custom Meat Locker offered to help clean it up, because well, it was their mess to begin with. The family was quickly asked to leave so they could begin the decontamination. Clean up crews cemented in floor drains and pumped bio waste from the kill floor into a 1,100-gallon tank and were able to dispose of it properly.

Let’s be honest, that Iowa family is going to move quick. Just knowing that there was animal blood all over your basement floor? Nah, nope, no. That’s just creepy and gross. Might as well call Carrie to come clean it up too. Can you imagine that horrid smell? It feels like if anyone saw this they would immediately turn into a vegetarian, for sure.