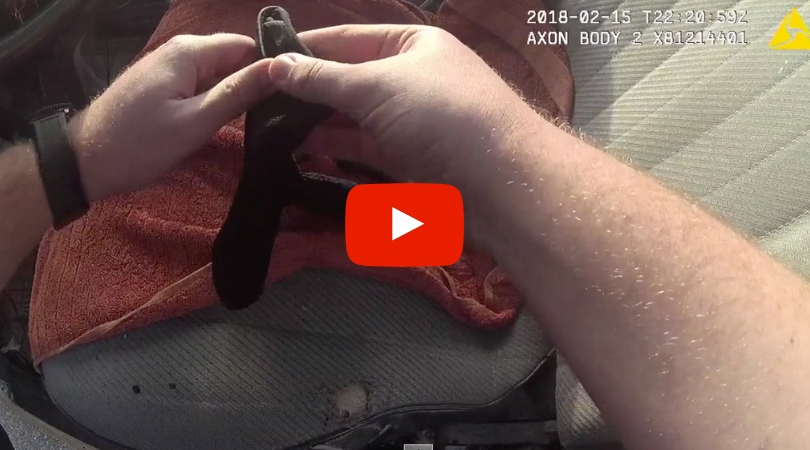 A Florida police officer is now under fire after disturbing body camera footage shows him planting drugs in a woman’s car and arresting her. Shortly after Sheriff Deputy Zachary Wester allegedly did the same to over 100 other victims, leading to 10 arrests. According to reports Wester was fired from his job and a criminal investigation is now under works by the Florida Department of Law Enforcement. No criminal charges have been filed at this time but some victims are reportedly being subpoenaed for interviews in connection with the investigation.

Mary Maddox, a Tallahassee attorney who is representing victims in cases against the officer, said she was working with 30 individuals who fell under the officer’s dirty work. The officer’s behavior might have been unnoticed if it wasn’t an assistant State Attorney, who is responsible for reviewing evidence before filing charges and several arrests categories, which includes drug possession.

Christina Pumphrey, an assistant State Attorney at the 14th judicial circuit, stated that she discovered the disturbing similarities across body cam footage of Wester’s arrest. She stated that some stops were conducted illegally, and also contain footage that conflicted with written affidavits. She also stated that people’s reaction to their arrest seems unusual.

A Florida cop has arrested dozens of innocent people after planting drugs in their cars during traffic stops pic.twitter.com/peWZy8BPm1

After investigations and Wester’s firing, the attorney’s office did not make an immediate move to drop the cases of the people who were still out on bond or in jail. Pumphrey stated she was getting explicit instructions ?to not dismiss the cases.? She stated, ?I know these people are sitting in jail. I know that the particular charges they?re in jail on they?re either innocent of, based on the information I see, or there?s no way I could take this in front of a jury.?

Some victims are suing the law enforcement officer, many of the arrested are still dealing with the effects of their charges. Some also had prior drug charges meaning the consequences of their arrests were amplified. In 2017 Derek Benefield was driving in the Florida Panhandle is Jackson County when he was pulled over by Westar for allegedly swerving into the opposite lane.

The officer claimed to smell marijuana and conducted a search of the vehicle which he reportedly found methamphetamine and marijuana. Despite Benefield denying the accusations, he was arrested and charged $1,100 in fines and court fees and sentenced to one year in County Jail. Benefield was 7 months into a sentence when in September 2018, the state attorney’s office dropped his case and 118 others. Wester was suspected of planting drugs during traffic stops over his two years with the Department.

Zach Wester Florida cop that planted drugs on victims for false arrests has been a fired https://t.co/rX6usWiJ7g

Last month Benefield and eight other individuals filed a federal lawsuit accusing officer and two other deputies of planting drugs and making an illegal arrest and the county and the Jackson County Sheriff’s Office of negligence. The suit accuses all defendants of violating the individual civil and constitutional rights through illegal search, detention, seizure, incarceration, and prosecution.

The federal lawsuit seeks damages in excess of $75,000 as well as a prospective injunctive relief alleging that Benefield and others have ?suffered grave mental anguish, pain, and suffering, loss of capacity for the enjoyment of Life, embarrassment, humiliation, loss of a mutation, lost employment opportunities, lost wages, and the loss of weather and emoluments.? Maddox stated the suit represents ?only the tip of the iceberg? and plans to add another 18 to 20 plaintiffs. At least 37 people have filed a lawsuit against Wester at the state level.