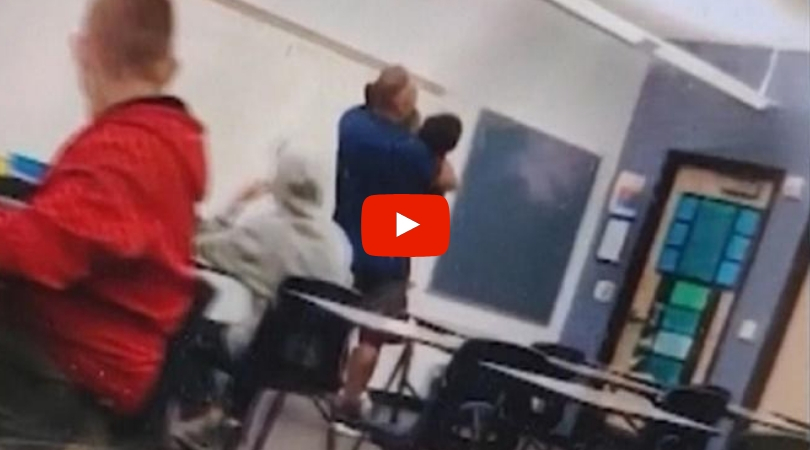 A Florida teacher was arrested for allegedly forcibly throwing a student out of his classroom in Buddy Taylor Middle School in Palm Coast, Florida. 47-year-old Jeffrey Paffumi picked the 14-year-old boy up out of his chair and carried him across the classroom. He then pushed him through a doorway and shoved him down the hall.

According to Flagler County Sheriff’s Office, as Paffumi carried the student out he said, “Show me how tough you are, you want to call me a cracker.” Part of the incident was captured on a cellphone by another student in the class. The student told investigators he was playing music on his computer during Paffumi’s class when he asked the teacher for help.

The charging affidavit states that Paffumi then went to the student’s desk and muted his computer. They then reportedly went back and forth, unmuting and muting the computer before Paffumi ultimately grabbed the device. The student then said, “Put my sh– down cracka.”

The Flagler County teacher then responded, “I’m not a cracka” to which the student replied, “You are a cracka.” That is when Paffumi picked the student up and turned him around, putting him in a chokehold.

Luckily for this teacher, when asked by investigators if his airway was restricted in any way during the incident, the student said no and could breathe the entire time. He also said he was not injured during the incident and didn’t have any bruises or marks from the encounter. Sheriff Rick Staly described the incident as “unfortunate.”

“As a teacher you have to control your temper even when students test you. This is an unfortunate incident involving a teacher and a student. My daughter is a school teacher and I know from her how misbehaved some students can be, but as a teacher you must deal with it appropriately. Corporal punishment like the old days is not allowed today.”

Flagler Schools Superintendent James Tager stated Paffumi’s actions are not consistent with how their educators are expected to act and it is not tolerated. Paffumi has been placed on leave pending the outcome of an investigation. Tager stated, “I have stressed to my executive team the importance of handling this investigation with the utmost seriousness it deserves. I also understand a video shows only a portion of a particular incident, so this investigation will encompass the incident in totality and not just what was captured on a camera.”

According to the sheriff’s office, Paffumi was previously arrested in 2012 for criminal mischief and charged with battery the same year for physical disturbance.