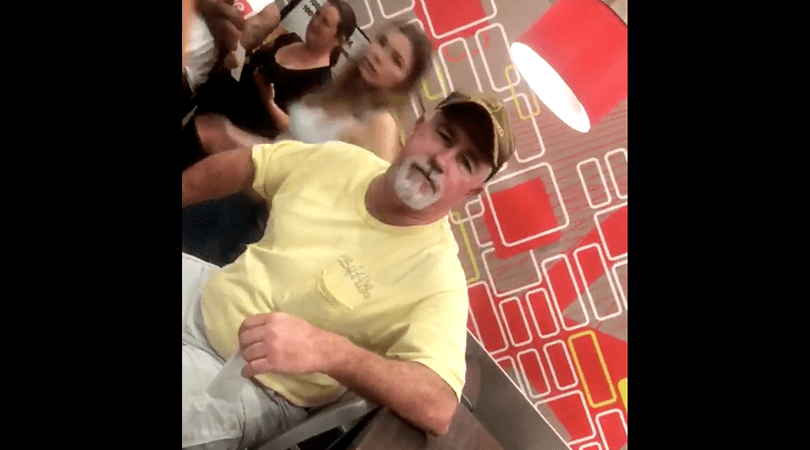 Some American college kids were at a McDonald’s restaurant in Savannah, Georgia when their conversation, which happened to be in Spanish, was interrupted by a redneck who could not, apparently, swallow both his French fries and the idea of someone speaking anything other than English in his country at the same time. (The quality of the English is mostly irrelevant, mind you, so long as you’re white anyway. No ebonics or broken Mexican English in this guy’s America, please. But also probably don’t speak it too fancy, like some queer either. Basically, you need to be white and in the Goldilocks zone of eloquence to not piss this guy off, most likely.)

The racist rant was captured on video by the girl the man confronted, 19-year-old Savannah College of Art and Design student Cristina Riofrio, and featured some choice quotes from the man, who also happened to be the Chatham County Sheriff’s Office employee. Just who we want to be involved in our justice system! An unapologetically biased man.

In america, i can speak FUCKING spanish if i want to pic.twitter.com/a6F93RftAR

In the trending video, the man tells Riofrio and her friends to “Speak English,” and “Shut the fuck up.” He also openly admits to being a racist (the transparency, at least, is appreciated) and accuses Riofrio of coming to America on a boat. Riofrio, for her part, was born in California and did not, to the best of anyone’s knowledge, travel to school in Savannah, Georgia by embarking on an ocean voyage down the Pacific coast of California and Mexico, through the Panama Canal, and up through the Caribbean and Atlantic to the Georgia coast. Her parents are Ecuadorian immigrants, though.

The racist man was told to leave the fast food place by a Mcdonald’s employee during the confrontation and fired from his job soon after.

This all begs the question… Why?

Why does it matter that someone was speaking Spanish near you? In America? Plus, this guy is an old Georgia redneck and the people speaking Spanish were Gen Z art students. He would have understood almost none of what they were saying had they been speaking English anyway. Honestly it’s probably preferable to not understand their conversation. It’s way easier to zone out a different language.

Also, why would you even bother expressing your anger about it? Why does anyone care about something like that?

Maybe the guy was having a bad day. Who knows. Either way, yikes this was dumb and rude.

Editor’s note: This article was originally published on September 27, 2019.