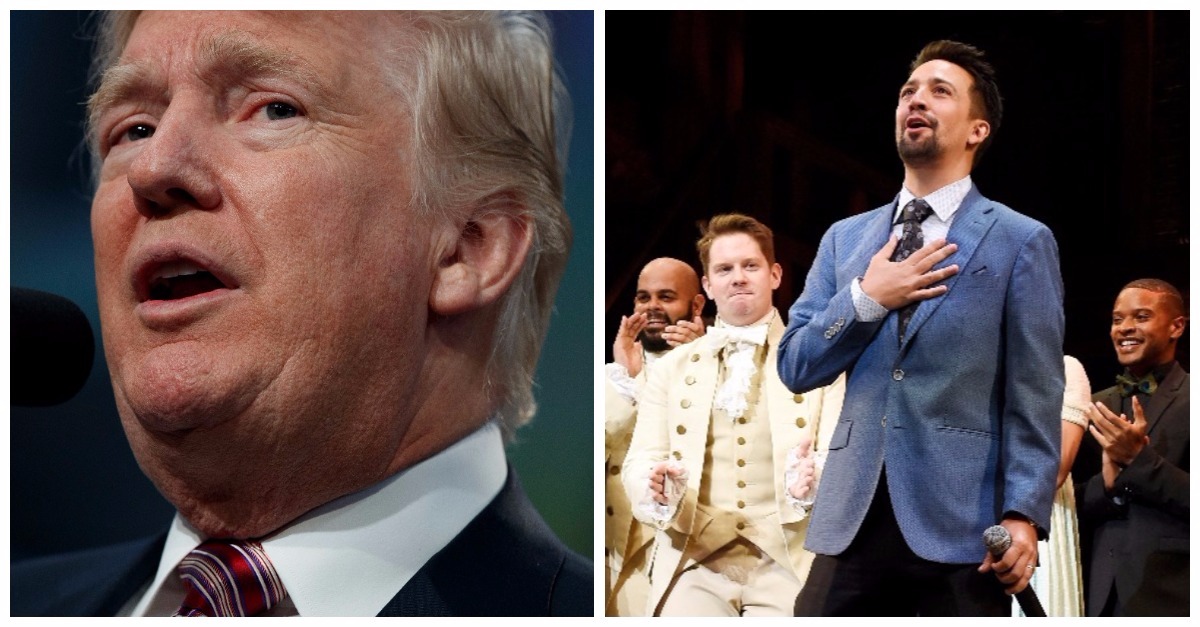 AP/Evan Vucci, Photo by Chris Pizzello/Invision/AP
President Donald Trump speaks to the National Association of Manufactures at the Mandarin Oriental hotel, Friday, Sept. 29, 2017, in Washington. (AP Photo/Evan Vucci), Lin-Manuel Miranda, creator of "Hamilton: An American Musical," acknowledges applause from the audience during the curtain call on the opening night of the Los Angeles run of the show at the Pantages Theatre on Wednesday, Aug. 16, 2017, in Los Angeles. (Photo by Chris Pizzello/Invision/AP)

Go to hell, go directly to hell, do not pass go, do not collect $200. That’s essentially what the creator and star of the Broadway play “Hamilton” tweeted early Saturday morning at President Donald Trump.

You're going straight to hell, @realDonaldTrump.
No long lines for you.
Someone will say, "Right this way, sir."
They'll clear a path. https://t.co/xXfJH0KJmw

She has been working 24/7.
You have been GOLFING.
You're going straight to hell.
Fastest golf cart you ever took. https://t.co/5hOY23MBvQ

The president and the “Hamilton” cast have quite a history.

You may recall that Vice President Mike Pence made an appearance at a show not many days after the election, was booed by the crowd and then the “Hamilton” cast’s Brandon Dixon made a speech that sparked a Twitter war.

While some saw the speech as a lecture, others viewed it as an olive branch.

RELATED: Trump criticizes “Hamilton” once more and this time he has some words for “SNL” too

Trump defended his VP time and again on Twitter after the “Hamilton” incident.

Our wonderful future V.P. Mike Pence was harassed last night at the theater by the cast of Hamilton, cameras blazing.This should not happen!