Who Were the 12 Titans in Greek Mythology? 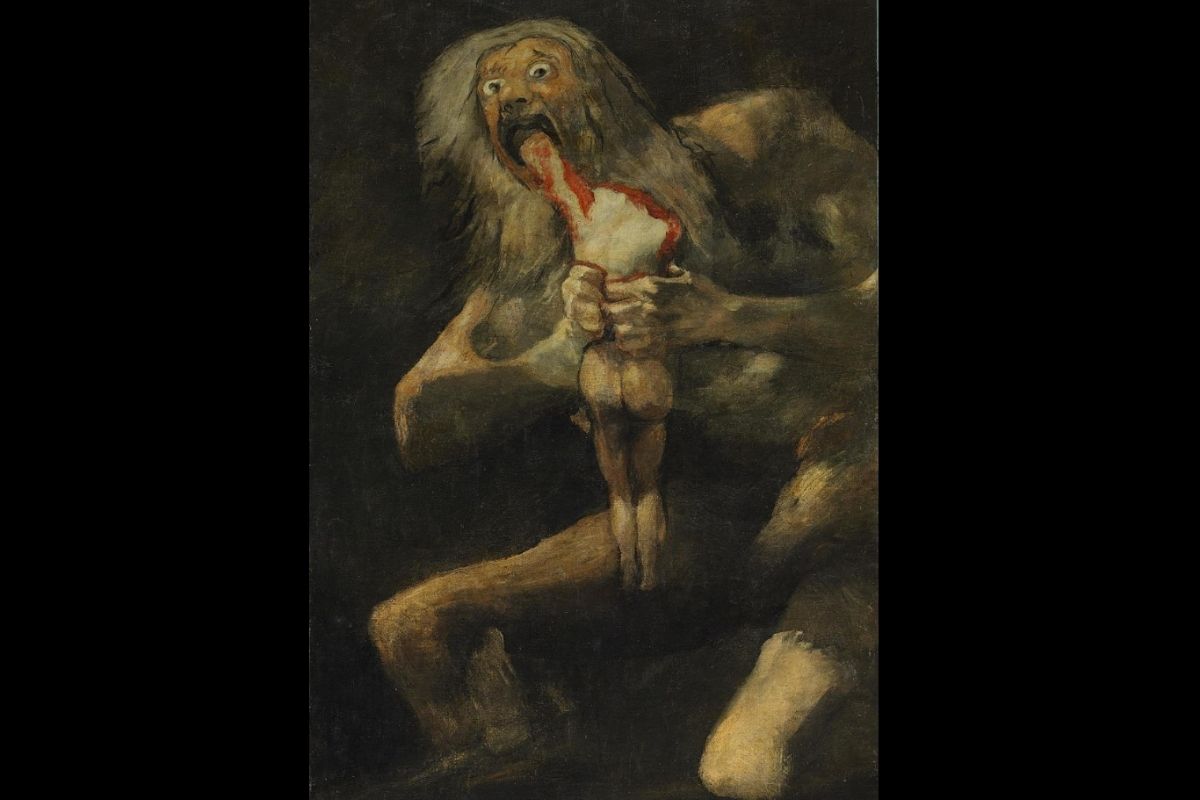 The Titans were not gods ? at least not the ones you know by heart. The first generation of Titans were ancestors of Zeus and his gang, arriving long before the more familiar Greek gods who populated Mount Olympus. Don?t expect to learn much about them from Clash of the Titans, the (heavily-memed) 2010 action-packed, CGI drama starring Liam Neeson; Clash of the Titans actually revolves around the myth of the Medusa-slayer-hero, Perseus, and thrives on inaccurate myth muddling. Most of what we know about the Titans comes from Hesiod’s Theogony. The real story of the twelve Titans is actually even more epic, bloody, and incestual than Clash (or its sequel, Wrath of the Titans) and served as a foundational creation myth for the Ancient Greece.

In the beginning there was nothing but Chaos: a gaping, swirling, never-ending void. Then Gaia (or Gaea), the earth, arose and the heavens, called Uranus, followed. So the land fell in love with the sky. Gaia and Uranus bore many children together. First, there were the Hecatonchires, three one-hundred-headed monsters, and three ugly, one-eyed Cyclopes. Disgusted with his hideous brood, Uranus imprisoned the six creatures in deep below the Earth, deeper even the womb of their mother: the pit of Tartarus. Gaia resented Uranus for trapping her first-born, and she committed to turning their next children against him. Those next children were the twelve Titans, 6 boys and 6 girls. Glorious, strong, and immortal, these twelve new offspring would eventually rule the world, lose it all, and define ancient Greek history.

Cronus, also spelled Kronos or Cronos and known as Saturn to the Romans, was the youngest and bravest of the first-generation Titans. His mother Gaia forged him a scythe, with which he is often depicted. Cronus used the scythe to castrate his father Uranus and cast his testicles into the sea. (Uranus?… manhood eventually washed up as sea foam, giving birth to the love goddess Aphrodite ? but that?s another story.)

Cronus became the leader of the Titans and de facto king of the universe, which prospered in a Golden Age. But Cronus didn?t keep his campaign promises. Cronus left his monster siblings to rot in Tartarus, against Gaia?s wishes. A prophecy warned Cronus that this betrayal would haunt him. So when Cronus wed his Titan sister, Rhea, and began to conceive, he swallowed every child she gave birth. Cronus swallowed five babies in all to avoid the pattern of patricide that he had started.

Cronus’ heinous act is depicted in Francisco Goya?s chilling painting, ?Saturn Devouring his Children.? The work was part of Goya?s Black Paintings series, which was painted directly on the walls of his home as the impressive artist approached death and teetered on insanity.

Rhea was the Titaness of fertility, and naturally loved her babies. So like Gaia before her, caring Rhea became enraged that every kid she had got put away ? in her partner?s stomach. Rhea devised a plan. The pregnant Titan gave birth to her sixth child secretly, in a cave near Crete, and returned with a stone swaddled up in blankets. The negligent father did not notice his infant was actually a rock, so he swallowed him desperately. Unbeknownst to Cronus, his real son was being raised by nymphs in Crete, plotting and training to overthrow his tyrannical father. That little boy?s name? Zeus.

Despite the thriving Golden Age, not all Titans supported Cronus? power-hungry efforts to keep his reign. Themis was the Titaness of divine law, order, and enforced the world?s original code of conduct. But Themis was no narc. When Zeus finally returned to instigate the rebellion against Cronus, Themis was the only elder Titan to help him. As she also controlled the Oracle at Delphi, Themis? ability to divine prophecies made her a useful ally. (And, later, a second wife to Zeus.) So when Zeus poisoned Cronus by putting mustard in his wine, and Cronus vomited up his five siblings ? Poseidon, Hera, Hades, Demeter, and Hestia ? the army was almost complete. Zeus? raging ten-year war against the Titans had begun: Titanomachy.

Like his name suggests, Oceanus was the Titan of the oceans and rivers. He was a fish-tailed, ring-horned personification of the supernatural stream believed to encircle the Earth. Oceanus was the oldest of the Titans and married to his sister Tethys. The pair had thousands 6,000 children: 3,000 river god sons and 3,000 Oceanid sea nymph daughters. When these 6,000 children began to flood all the streams, Thetys and Oceanus were forced to separate due to environmental concern. Preferring the company of his river family, Oceanus did not participate much in Titanomachy, which was rewarded by Zeus. When Oceanus? Titan siblings eventually lost the long battle against Zeus and the future Olympians, they were cast into the hellish pit of Tartarus, But Oceanus was spared. Sacrificing his watery realm to Poseidon, he spent the rest of eternity as a minor fresh water god.

Like her husband, Oceanus, Tethys controlled fresh water and was also the Titaness of nursing. For Tethys, nursing 6,000 was unconventional; she fed them water from her partner?s aquafers. Têthê, the Greek word for ?grandmother,? derived from Tethys? name and nurturing attitude. Disappointingly, but unsurprisingly, there is much less surviving information about Tethys than Oceanus. However, Thetys’ direct lineage endures through mythology; she is the mother of Metis who gave birth to Athena from inside Zeus’s head

Coeus was the Titan of intellect and forethought. He also represented the Pillar of the North, which keep the heavens and earth apart and carried many constellations. Coeus is not an active force in Greek mythology after the crashing end of the Golden Age and Titanomachy. When Zeus bested Cronus, Coeus (along with his five Titan brothers, excusing Oceanus) was chained up in Tartarus for eternity. However, the children he sired with his sister, Phoebe were well-known figures in the stories about the Olympians and their godly shenanigans.

As a Titan, Phoebe is most famous for her grandchildren, the twin god and goddess Apollo and Artemis. Her name stands for ?golden crowned? and she, like Apollo who would rule the sun and the Oracle at Delphi, was known for prophetic abilities. (Apollo was also known by the alternative name, Phoebus.) Phoebe married her brother Coeus and they had the daughters, Leto and Asteria. Behind his first wife Hera?s back, Leto became pregnant by Zeus. The jealous Hera forbid any place on land to take Leto in for the delivery, so the island of Delos rose from the sea to accommodate her. This miraculous story led to Leto?s symbolization as protective mother force. Apollo and Artemis went on to become two of the most famous, fantastical gods of them all and made their home alongside Zeus, and even Hera, on Mount Olympus.

Iapetus was the first Titan tasked with holding the heavens apart from the Earth, a role which he passed on to his more well-known son, Atlas. Iapetus was also father to Prometheus and Epimetheus; two brothers? whose historic hijinks shaped the evolution of humanity. Prometheus and Epimetheus did not fight alongside their father in Titanomachy and were spared the punishment of Tartarus. When Zeus became king, he tasked the Titan brothers with creating a breed lowly mortal creatures who could admire the gods. So Prometheus shaped the first human out of mud, and breathed life into him. Epimetheus, who had used up all the useful traits like fur, wings, speed, and strength, on the animals had no good offerings left for man. But Prometheus loved his creation and didn?t want the race to suffer. So Prometheus instilled his own cleverness in man, and behind Zeus? back, provided the lit torch of fire. As punishment, Zeus chained Prometheus to the side of a mountain where every day an eagle comes to painfully tear out his liver, which regenerates, for eternity.

Mnemosyne, the Titan goddess of memory, slept with Zeus nine times. This resulted in the birth to the nine muses: Calliope, Clio, Erato, Euterpe, Melpomeni, Polymnia, Ourania, Terpsichore and Thalia. Those muses inspired man?s efforts in epic poetry, history, love poetry, music, tragedy, sacred poetry, dance, and comedy, respectively. The muses are still invoked by artists today. (How many girlfriends have been casually referred to as ?muses? over years?) But in the ancient world, it was typical for stories to begin with invoking this divine tradition. Homer?s Odyssey famously begins: ?Sing in me, Muse, and through me tell the story of that man skilled in all ways of contending, the wanderer, harried for years on end…?

Crius was the Titan of constellations and married his half-sister, Eurybia, who was the daughter of Gaia and Pontus, a sea god. The pair had many important children, including the Four Winds, whom Ancient Greek sailors prayed to for safe, timely voyages. But having fought against Zeus and the Olympian gods throughout Titanomachy, Crius was chained up alongside his Titan siblings for thousands of years to come.

Thea, also spelled Theia, was the Titaness of light, sight, and sun. She was mother to the sun god Helios whose golden chariot pulls the daily sunrise. Thea was also said to be the most gorgeous of all the Titan sisters, as she radiated golden light. She was married to Hyperion, her Titan brother whose power of light matched her own. In addition to Helios, Thea gave birth to Selene, goddess of the moon, and rosy-fingered Eos, goddess of the dawn

Hyperion was the Titan of light, observation, and the East. After his brother Kronos met an electrifying end with Zeus’s thunderbolt, Hyperion was best Titan warrior. But as the Titanomachy bloodbath raged on, he was eventually bested by Poseidon and cast into Tartarus. Some myths contend that Hyperiod gifted mankind with the ability of sight, because his name translates to ?He who watches from above.? Hyperion?s name is now immortalized as one of Saturn?s moons, leaving the memory of this bright Titan god in constant orbit of his fallen king brother Cronus (otherwise known as Saturn), forever.