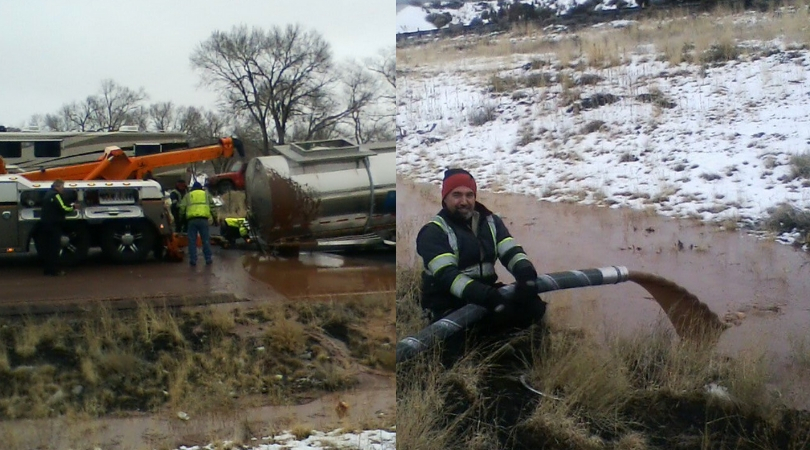 Quick, someone call Augustus Gloop! It looks like Willy Wonka wanted to pay a visit to Arizona after 40,000 pounds of liquid chocolate spilled all over the Interstate near Flagstaff Arizona! According to the Arizona Department of Public Safety, the chocolate fountain left a river of the delicious liquid all over the road.

The single-vehicle accident occurred on Interstate 40 near the 211-mile marker, leaving lanes blocked while crews attended the chocolate mess. Thankfully, no one was injured, but the clean up took around 4 hours. The DPS took to Twitter to alert commuters, writing, “There is a river of chocolate blocking/flowing in the westbound lanes of I-40 at milepost 211, east of Flagstaff. This will be a sweet cleanup!”

The tanker was hauling 3,500 gallons of 120-degree liquid chocolate, equivalent to 40,000 gallons of the sticky substance. Thankfully, the heat canceled out due to the cold weather, landing on snow and creating a big ol? chocolate slushie!

The latch that connects the main truck with the trailer, reportedly detached, causing the tanker to roll over. The tank was heavily damaged in the rear, which required for workers to pump out the liquid into the median tanker so it could be lifted onto a lower truck.

Thankfully, the liquid is biodegradable and the driver wasn’t cited for the accident. But honestly, props to the driver. Can you imagine being in that situation? How do you even call your boss and keep a straight face while telling him you literally created a sweet hot mess?

Where’s a tanker truck filled with peanut butter when you need one?