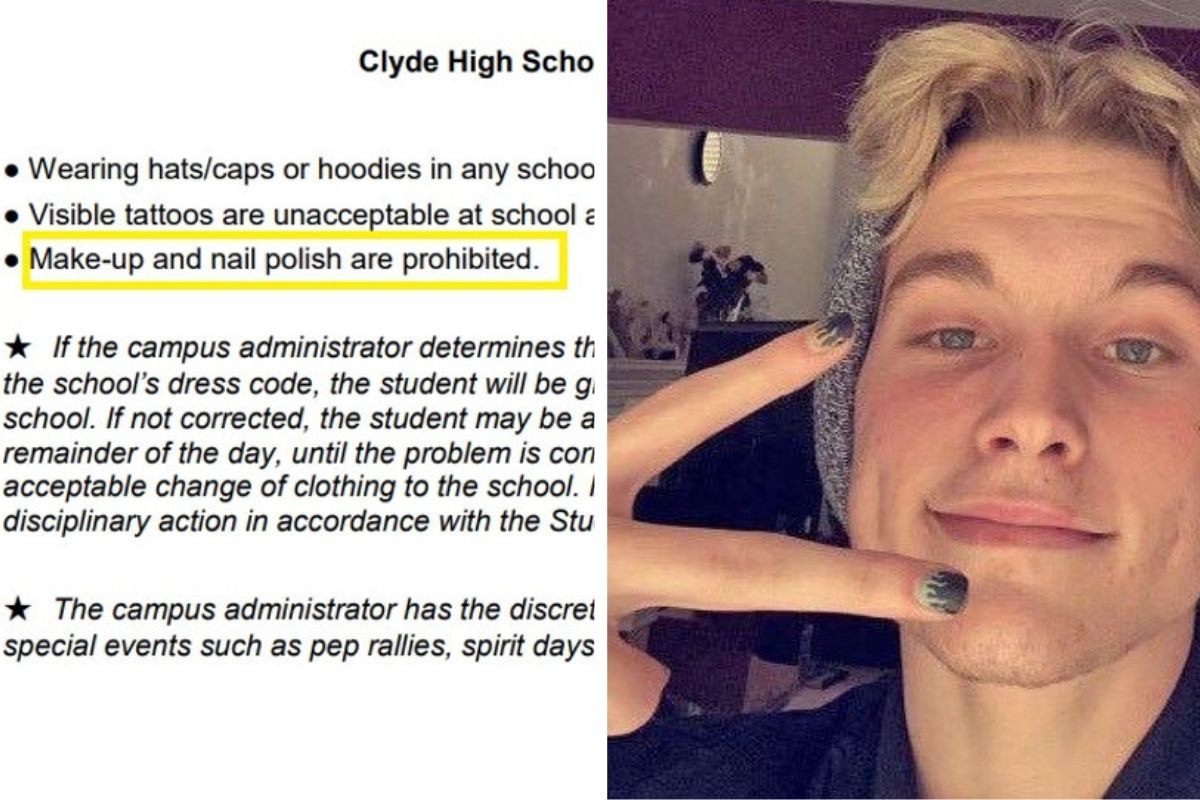 A student in Texas is not protesting his in-school suspension for wearing nail polish. The student, Trevor Wilkinson, is openly gay and is a senior at Clyde High School. Wilkinson said she was sent to ISS and is heavily upset about the situation. This school district’s student handbook states that male students are prohibited from wearing any makeup and nail polish.

If a student decides not to correct it, they may be assigned to in-school suspension for the remainder of the day until the problem is corrected, or until one of their parents or does it need rings and unacceptable change of clothing to the high school. All repeated offenses may result in more serious disciplinary actions in accordance with the high school student code of conduct. Despite the warning, Wilkinson stated that he thinks the policy is very unjust and is now taking a stance to get a change.

On Thursday, the school gives Wilkinson three choices, remaining ISS, removing his manicure, or going to Virtual learning. Wilkinson said that he is not going to remove nail polish, and he has chosen to stay in ISS. According to the school district, superintendent Kenny Barry stated that no changes will be made to the dress code for the remainder of the year. She noted,

“The District conducts a diligent and thoughtful review of the dress code on an annual basis,” said Barry. “That review process results in the development of a final dress code that is consistently implemented and enforced during the next school year. Parents and students are provided a copy of the dress code prior to the start of each new school year.”

The superintendent also stated that any questions or concerns with the dress code are each reviewed individually, but the district could not share any information regarding one specific student. The district stated it did appreciate the feedback and input on the issue that was received from the members of the community, and will now take into consideration when it conducts its annual review later the school year.

After his in-school suspension, Wilkinson went on to create a petition on Change.org for people to sign in order to get the policy changed. Showing a picture of his black nail polish, the high school student noted, “freedom of expression is validation enough that the dress code and policy is not okay. I am a gay male and I’m beyond proud. This is unjust and not okay. Help me show that it is okay to express yourself and that the identity that society wants to normalize is not okay. I am a human. I am valid. I should not get in trouble for having my nails done.”

Honestly, it’s just nail polish, it’s not hurting anyone. Change your student handbook and get with the norms. Several male celebrities have been doing this for ages. Remember Kurt Cobain, Johnny Depp, David Bowie? I hope he also painted his toenails after this ridiculous incident.