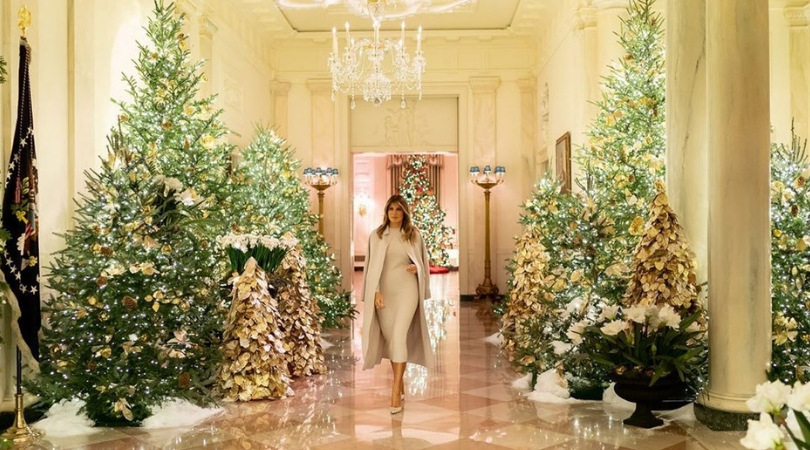 It looks like Melania Trump decided to stay away from anything blood-red this holiday season, after receiving quite a bit of backlash from last year’s decorations. The first lady just unveiled the White House Christmas decorations, and it looks like Winter Wonderland exploded inside. Which is a good thing, definitely, because what’s Christmas without a little bit of snow?

Through Instagram and Twitter, Trump wrote, “The Spirit of America” is shining the @WhiteHouse!” referencing this year’s theme. She noted, ?I am delighted to share this beautiful exhibit of patriotism for all to see, and excited for everyone to experience the beauty of the #Christmas season!?

President Trump’s wife attached a video to her message, showing her walking through the grand foyer and touring the seasonal decorations, which included a garden of white flowers and a mini replica of the White House, turned into an advent calendar.

“The Spirit of America” is shining in the @whitehouse! I am delighted to share this beautiful exhibit of patriotism for all to see, and excited for everyone to experience the beauty of the #Christmas season!

Decorations also include the official White House Christmas tree, which is an 18-foot-tall, displayed in the Blue Room. It is decorated with handmade paper flowers that represent each state and territory. The East Wings’s Gold Star Family Tree, in honor of those who lost and immediate family members who served in the armed forces, is decorated with red and gold stars, as well as blue and white ribbon. More than 250 people from all 50 states volunteer every year to decorate the White House, which will be on public display all through December.

It truly is impressive seeing all the lights stand out. Plus, who doesn’t like a little bit of nostalgia that represent our country? The White House described Mrs. Trump’s decoration choices as celebrating ?the courageous individuals who have shaped our country and kept the American spirit alive.?

The @WhiteHouse is sparkling for the Christmas season!

Last year’s holiday decorations drew criticism by several online users who compared the “unusual choice” of an all-red Christmas tree to the flood of blood in the horror film The Shining. The theme, “American Treasures,” include the crimson evergreens lining the East colonnade, attracting similarities to the costume of the Handmaid’s Tale.

The White House quickly explained the motif through a statement, noting, ?The choice of red is an extension of the pales, or stripes, found in the presidential seal designed by our Founding Fathers. It?s a symbol of valor and bravery.?

What do you think, do you like this Winter Wonderland theme better?