MSNBC Reporter Shames Man for Not Wearing Mask, Man Points Out No One on His Crew Has Masks On 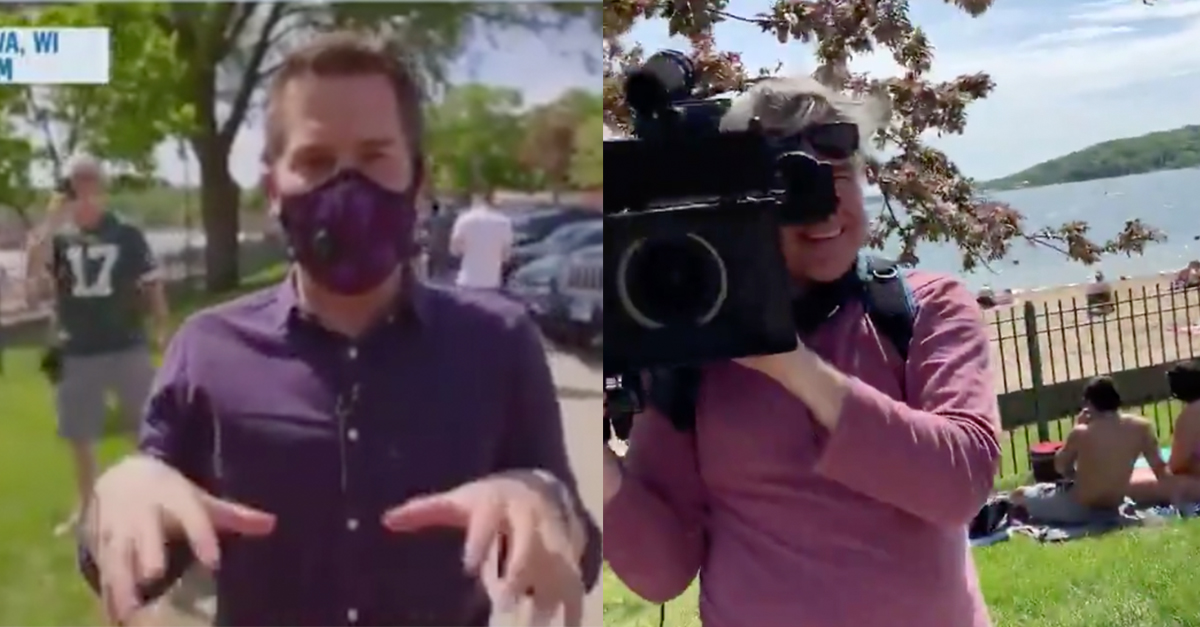 MSNBC reporter Cal Perry was in the midst of a live report from Lake Geneva, Wisconsin on the program MSNBC Live with host Katie Tur about the crowds gathering at the lake full of people who were seemingly unconcerned with social distancing and wearing masks while the state celebrated Memorial Day weekend during the Coronavirus pandemic. A legitimate concern and story, to be sure.

Perry, who was wearing a mask himself during the report, was providing grim and astonished commentary to Tur about how he’d seen almost no one wearing masks around the popular Midwestern vacation spot despite the fact that COVID-19 was still ravaging the United States.

Suddenly, though, the tables were turned on the intrepid reporter braving the mask averse, unwashed, science-less, Walmart shopping hordes he assumed he was covering in the most wonderfully ironic of ways. Naturally, all of it was caught on video.

Bystander: "Including the Cameraman — Half your crew’s not wearing them!”

You asked for it! Gotta love Cal Perry reach out and touch the cameraman who is not wearing a mask and is not social distancing…and who also touched his face. Breaking ALL the rules! pic.twitter.com/5UGQHTmNOX

While Perry was filming his segment one Wisconsinite, appropriately clothed in a well-worn Packers jersey, was circling the reporter and his crew, silently filming them with his phone. The man was not wearing a mask and, after a few seconds of his filming the production, Perry became annoyed and instructed his cameraman to turn and film the man as a shameful example of one of these lake-goers out in public without a mask on.

Perry says to Tur as the camera turns, “You can see, here, nobody’s wearing ’em.”

The man immediately replies, on the live broadcast, “Including your cameraman.” He then added, “Half your crew’s not wearing them.”

Perry, who’d just been dunked on harder than a French Olympian, quickly blurted, “Yeah, including the cameraman, there ya go.” Resigned to the fact that had been as horribly owned as a Fast and Furious loving teenager’s Honda Civic, Perry then sends it back to Tur, who is only able to muster a half-hearted, “Striking images” upon witnessing her coworker’s soul get ripped out through his anus.

1. I should note that I am pro mask. These people out at Lake Geneva and other spots over Memorial Day weekend are dumb and bordering on homicidally negligent for neglecting to social distance and wear masks. 100,000 people and counting are dead from Coronavirus and that is with all the efforts we’ve taken to social distance and slow the spread. Imagine what would have happened if we’d been behaving like the people at Lake Geneva this weekend the entire time. The death toll would be tragic and horrifying beyond anything all but the oldest of us have witnessed in our lifetimes.

2. That still doesn’t mean Cal Perry wasn’t being a hypocritical ass. He was. This journalist was, for all intents and purposes, just straight-up lying. He got what he deserved. I would take everything you see Cal Perry of MSNBC report with a big grain of salt for a while. All news reports are worth a fact check but his are especially for the time being.

2a. There’s also a chance Perry just didn’t give enough of a shit to bother to do a good job. The man has covered war zones for most of his career and was CNN’s bureau chief in Baghdad, Iraq from 2005 to 2007. Perry thinking that it was beneath him to report live from Cheese Beach, Fatconsin to do a story, literally, on the mouth breathing of mouth breathers (all his hypothetical words here, of course) is fairly plausible.

3. I’m glad Perry and MSNBC got shredded not only because they were caught lying here but also because, as a native Midwesterner, I couldn’t help but pick up on some not-so-subtle elitism while watching this story. It was as if they were saying, “Look at these red state bumpkins treat Coronavirus like it’s a hoax. Just stunning delusion here. How have they come to this? Maybe they never had a chance. Look at them. Look at where we are, after all.”

This exchange between Tur and Perry — “Are they not worried about their personal safety?” “I haven’t met anybody who is.” — is just absurd. Yeah, you’re right Cal, none of these walking curds even understands they’re alive, actually. Most of them definitely aren’t weighing risks and making a choice (even if it’s not a good choice). They’re all just waddling around wondering when they’ll get to eat their next sausage, totally unaware of what germs are.

That’s all my personal reading of it, obviously. Maybe it’s bullshit, but that’s what I saw. And, granted, plenty of conservative and liberal news networks have shamed New Yorkers, among others, for their own lack of social distancing and good pandemic practices.

Still, this particular observation of bad Coronavirus actors felt a bit more “other’d” than what I’ve (personally) seen from reports out of New York, California, etc.

4. It wouldn’t surprise me if many a conservative and independent Wisconsin voter felt the same way. That should help Joe Biden win the state, amiright MSNBC? If the political left were a paraplegic it would still find a way to shoot itself in the foot.

5. But really, don’t be like Cal Perry, his crew, the guy filming, or pretty much anyone else who was out at Lake Geneva over Memorial Day weekend. Wear a mask and stay socially distant. It’s okay to start dipping your toes back in the water, but it’s not time to dive in yet. We aren’t out of the woods.