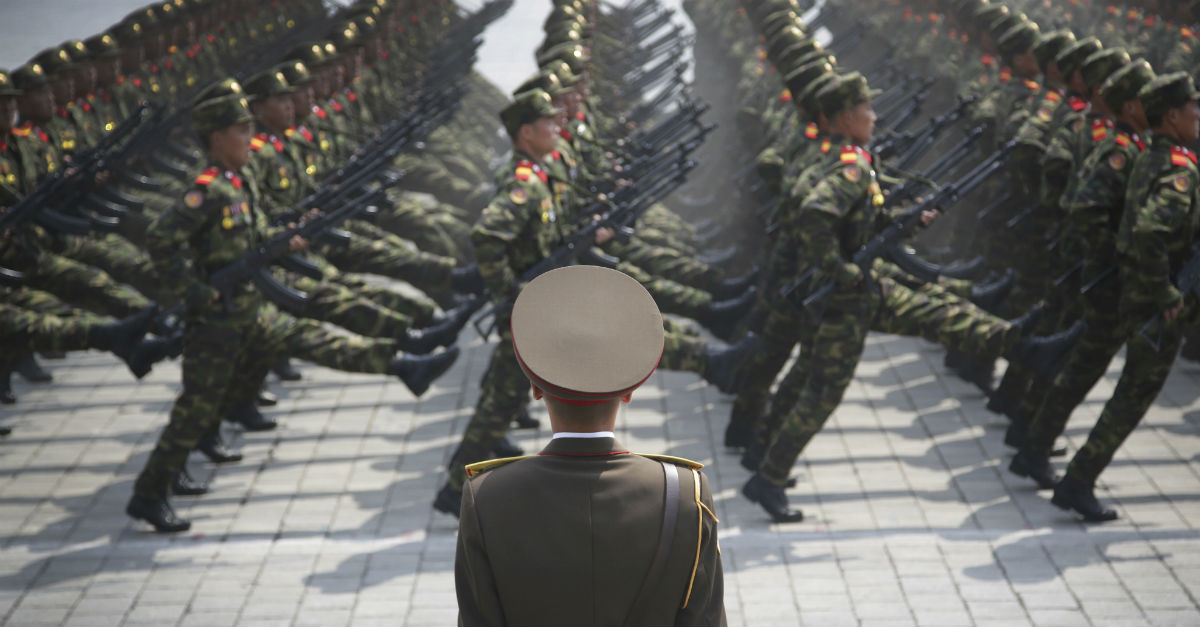 (AP Photo/Wong Maye-E, File)
In this April 15, 2017, file photo, soldiers goose-step across Kim Il Sung Square in Pyongyang, North Korea, during a parade to celebrate the 105th birth anniversary of Kim Il Sung, the country's late founder and grandfather of current ruler Kim Jong Un. The message of the parade is clear: North Korea is, or is near to being, able to launch a pre-emptive strike against a regional target. It is preparing to withstand a retaliatory follow-up attack if it does, and it is building the arsenal it needs to then launch a second wave of strikes, this time at the U.S. mainland. (AP Photo/Wong Maye-E, File)

Former North Korean diplomat Thae Yong-ho had an ominous warning for U.S. lawmakers during his testimony on Wednesday.

Thae’s remarks to legislators were blunt and dark as he outlined a military strategy reminiscent of a “shoot first, ask questions later” ideology. The defector stated that “North Korean officers are trained to press the button without any further instructions from the general command if something happens on their side…if there is any sound of fire or bomb strikes from Americans, the North Korean artillery and short-range missiles will fire against South Korea,” NBC reports.

RELATED: North Korea revealed how it plans to reach ?eternal prosperity? through the United States

Speaking to the House Foreign Affairs Committee, Thae urged for a diplomatic solution to the tensions between the United States and North Korea.

“Before any military action is taken, I think it is necessary to meet Kim Jong-un, at least once, to understand his thinking and try to convince him that he would be destroyed,” he said, adding that “great and unexpected changes are taking place in North Korea.”

These changes, Thae speculates, could make a civilian uprising possible as more people realize the horror of their living conditions, The Washington Times reports.

In a press release following the hearing, the foreign affairs committee noted that “Thae Yong-ho is one of the highest-ranking North Korean officials ever to defect.” He was the deputy ambassador the United Kingdom when he fled with his family for freedom. The committee, which is chaired by Rep. Ed Royce (R-Calif.), also stressed that it’s important to get information to North Koreans about the outside world.