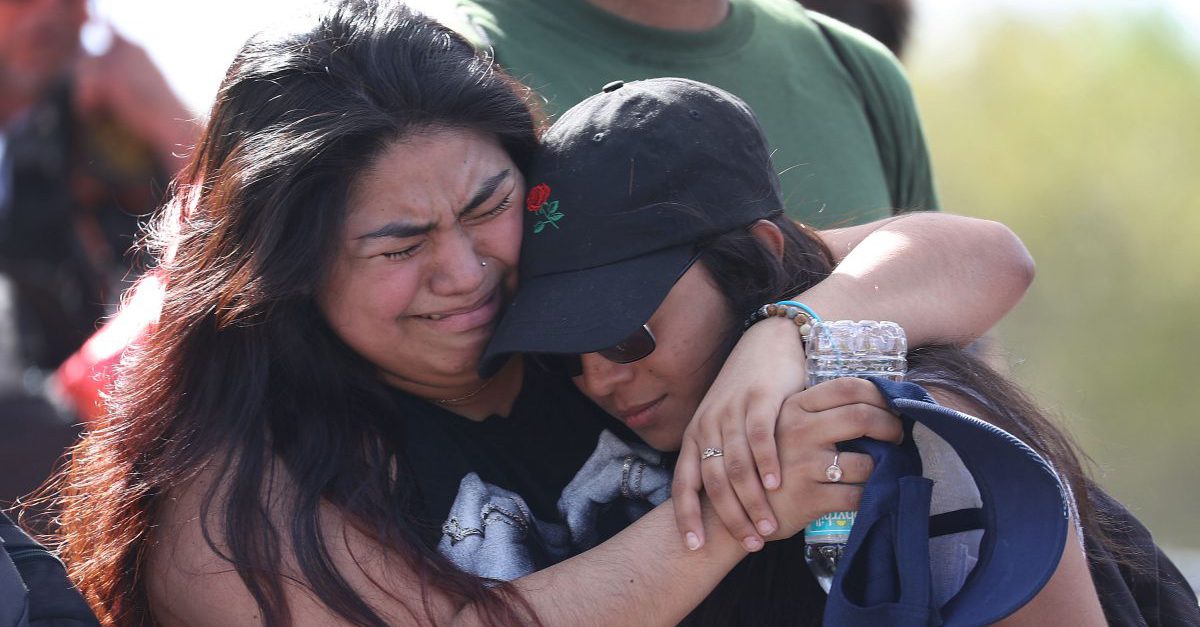 Joe Raedle/Getty Images
PARKLAND, FL - FEBRUARY 23: Fernanda Mora (L) an alumna from Deerfield Beach high school and Vallery Cruz a senior at the school hug in front of Marjory Stoneman Douglas High School after walking the 11 miles from school to school in support of the victims of the mass shooting on campus on February 23, 2018 in Parkland, Florida. Police arrested 19-year-old former student Nikolas Cruz for killing 17 people at the high school. (Photo by Joe Raedle/Getty Images)

Coral Springs Police officers responded to a school shooting at Marjory Stoneman Douglas High School on February 14th and were “stunned” to find that four Broward County Sheriff’s Deputies who’d arrived before them had not yet entered the school building where the shooting was taking place, according to an explosive report first posted by CNN.

One of the four is Sheriff’s Deputy Scot Peterson, who worked as Douglas High School’s School Resource Officer (SRO). At this time, the other three remain unnamed.

Yesterday, Broward County Sheriff Scott Israel announced that Deputy Peterson had tendered his resignation and applied for retirement after an investigation uncovered that Peterson had not tried to enter the building on Douglas High School’s campus where dozens were being shot. Peterson, who is eligible for retirement, will retire with a pension.

As the lone gunman opened fire on staff and students, killing 17, Peterson “did nothing” and waited outside the building for “upwards of four minutes,” according to Broward County Sheriff Scott Israel. In all, the school shooting lasted about six minutes.

These accounts are eyewitness accounts and not the findings of a final report, sources caution.

The official report on the shooting and the law enforcement response, however, is in development — it may come as early as next week. That report will compare eyewitness accounts with surveillance camera footage to construct a thorough timeline.

An internal email from Coral Springs Police Chief Tony Pustizzi, also acquired by CNN, appears to confirm the eyewitness reports. In it, he writes in part:

I understand that another agency has given the impression that it had provided the majority of the rescue efforts, and that the tremendous work of the Coral Springs Police and Fire Departments has not been recognized. Please know that this issue will be addressed, and the truth will come out in time. The focus for us now, however, must be on healing… While recognition is not the reason we choose to do what we do, our Commission, City Manager and residents are well aware of the actions our members took in the face of danger and the heroes that you are.