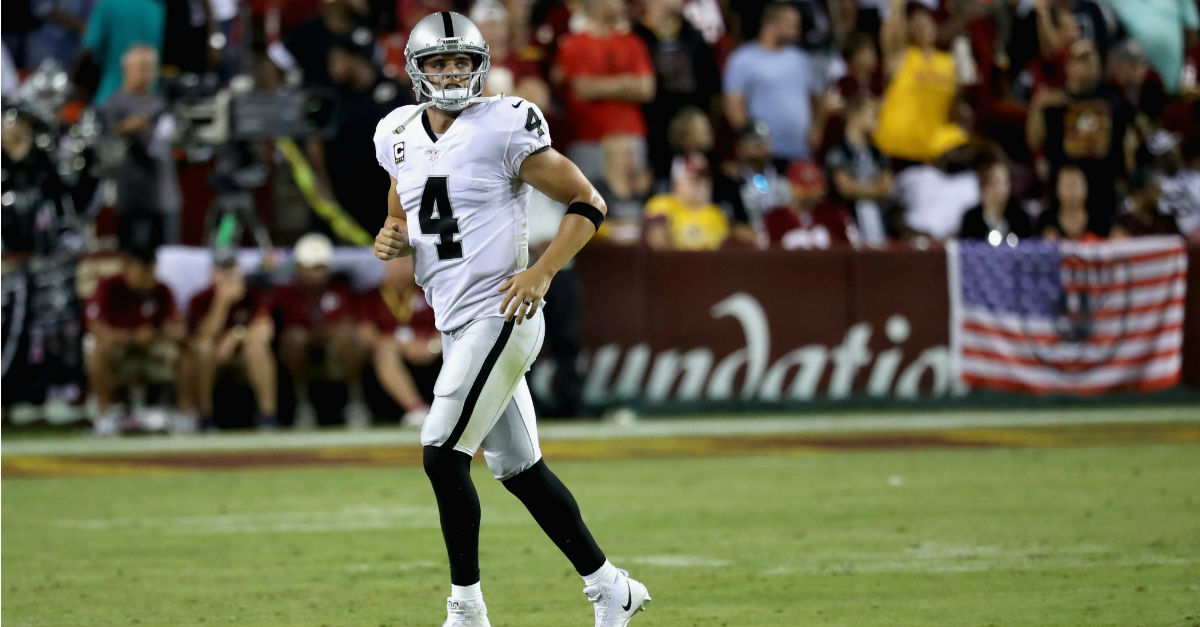 Rob Carr/Getty Images
LANDOVER, MD - SEPTEMBER 24: Quarterback Derek Carr #4 of the Oakland Raiders runs off the field late in the fourth quarter during their 27-10 loss to the Washington Redskins at FedExField on September 24, 2017 in Landover, Maryland. (Photo by Rob Carr/Getty Images)

Members of the Oakland Raiders responded to a politically charged claim made by Miko Grimes, wife of Tampa Bay Buccaneers cornerback Brent Grimes, regarding the protection of Raiders quarterback Derek Carr.

Most of the Raiders knelt or sat in a September game against the Washington Redskins after President Trump used the term ?son of a bitch? in reference to football players who knelt for the national anthem and called for them to be fired. The players were joining others in demonstrating both on and off the field.

Grimes alleged during a Tuesday appearance on “The Breakfast Club” that Carr’s teammates allowed him to be injured in the game because of a disagreement over the national anthem protests. She called Carr a “Bible thumper to the fullest” and accused him of trying to tell his teammates that they needed to stand for the national anthem. Grimes then said there was a fight in the locker room before the team came out.

RELATED: MLB player says he was denied service for anthem protest, but his waiter says otherwise

The Washington Post’s Mark Bullock, who analyzes NFL films for the publication, disputed Grimes’ claim that the team conspired against Carr after rewatching the play.

Some conservative radio hosts attempted to use Grimes’ words to speak negatively of the national anthem protests in the NFL, adding that Carr was either never sacked and had been sacked one time in the 2016 season. Snopes fact-checked the claims, concluding “In reality, Carr was sacked 16 times during the previous season ? one of which resulted in a season-ending broken fibula. In 2015 he was sacked 31 times, and in 2014 it happened 24 times.”

Players also rushed to disagree with her retelling, including cornerback Antonio Hamilton and running back Jalen Richard.

This is all the explanation you, I won’t reply back to anything else on this subject… God, Love & Peace 🙏🏾🙏🏾🙏🏾 pic.twitter.com/DV2ysFTQ04

Offensive tackle Donald Penn subtweeted Grimes, saying “It?s crazy how people will make up lies and tell a story so false and untrue [to] get them some attention I hope it was worth it all lies.”

Penn’s wife, Dominique Penn, also responded to the Grime’s claims, tweeting “ain’t nobody hurting [Carr] on purpose, no fights in the locker room!”

FOH ain’t nobody hurting DC on purpose, no fights in the locker room! #FakeNews They all trying to win that super bowl like everyone else😴

Carr himself also responded by tweeting a screenshot of a passage from the book of Proverbs.

He also shared another tweet that quoted Proverbs 18:24, “One who has unreliable friends soon comes to ruin, but a real friend sticks closer than a brother.”

ESPN’s Dianna Russini said a source informed her that Carr did not take a hardline stance in the locker room as Grimes suggested.

The Raiders had to come out on the field during the coin toss and couldn't go back in the locker room for the anthem. This caused confusion

Raiders didn't know what to do. I'm told "Derek Carr never told his team to stand, sit, or kneel. He told them I respect your choice"

RELATED: Mark Cuban and Draymond Green are at odds over the word ?owners? in the NBA

Grimes later tweeted that her comments were “edited” to look like fact. The entirety of her interview is available for viewing, courtesy of “The Breakfast Club’s” YouTube channel.

Nooooooo Breakfast Club edited it like it was fact. Were u there when i did the interview? Nope! https://t.co/Oa41UG2fqB

Grimes has faced a great deal of backlash over the years for her tweets and public comments about reporters, players, and the league.