Starbucks Employee Fired After Officer’s Cup Had ‘Pig’ on Label 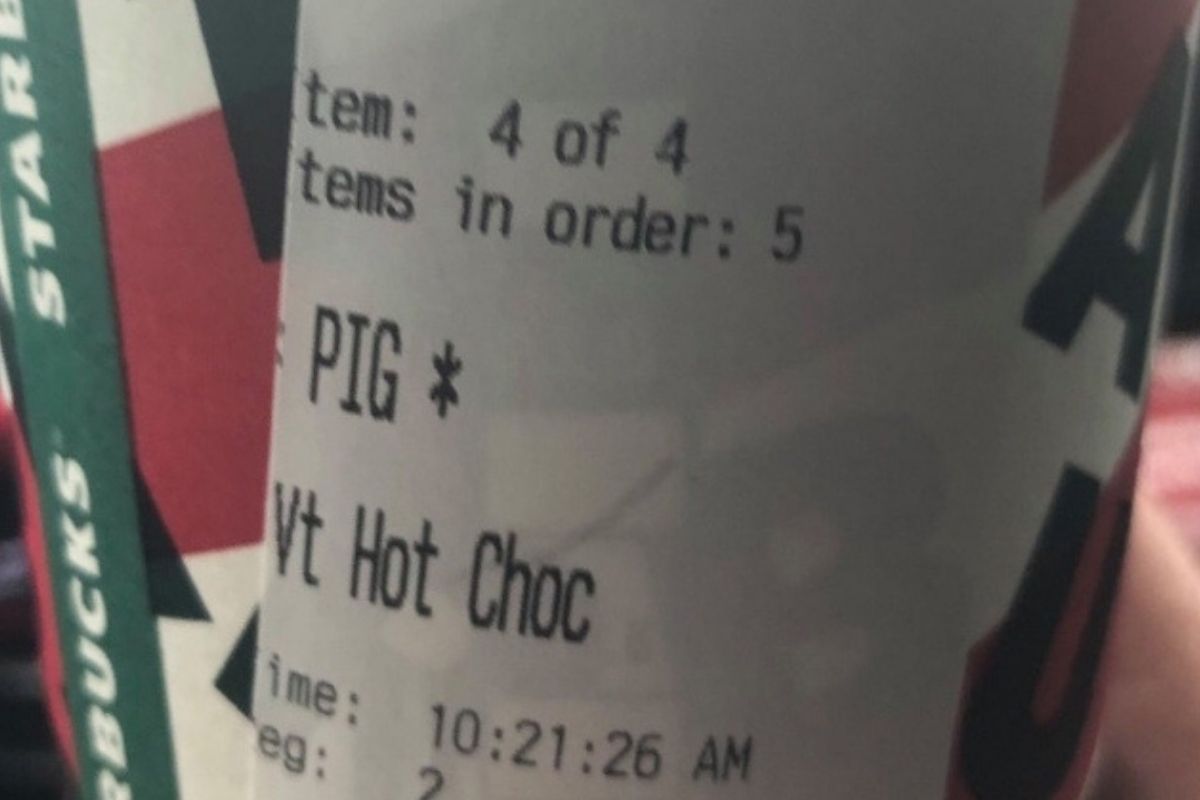 Yikes! A Starbucks employee was recently fired after printing the word “PIG” on the label of an Oklahoma police officer’s order! The officer, who is a member of the Kiefer Police Department, went to the Starbucks in Glenpool to pick up five drinks to thank 911 dispatchers who were working on Thanksgiving day. When the officer got his order, he noticed the word “PIG” was printed on all labels, and quickly contacted the police chief, who then called the store and spoke to a manager.

Kiefer Police Chief Johnny O’Mara quickly uploaded the image of one of the cups on Facebook, prompting a quick response from Starbucks. In the post, which has since been taken down, O’Mara stated, “What irks me is the absolute and total disrespect for a police officer who, instead of being home with family and enjoying a meal and a football game, is patrolling his little town.” He also noted that the store manager had offered to reprint the computer-generated labels.

Kiefer Police Chief Johnny O’Mara says one of his officers picked up five cups of coffee today at the Glenpool @Starbucks for his dispatchers, as a thank you for working on Thanksgiving.

“PIG” was printed on all five labels, he says. @NewsOn6 pic.twitter.com/tmEwid8JRc

The Oklahoma police chief stated he was disappointed the label said “pig” since it is basically another “tiny symptom and a nearly indiscernible shout from a contemptuous, roaring and riotous segment of a misanthropic society that vilifies those who stand for what?s right and glorifies the very people who would usher in the destruction of the social fabric.”

The officer did note that the Starbucks barista who gave him his order contacted him after and apologized, saying it was only meant to be a joke. Starbucks also issued an apology and stated the employee who printed the label with the “offensive word” used poor judgment and was fired for violation of company policy.

This is @Starbucks response tonight. The company responded to the original Facebook post by the police chief: pic.twitter.com/dIqjtLT3tG

Fast forward to a few days after the incident, Starbucks manager, Lola Price, spoke about the incident saying that she was wrongfully fired after the coffee chain was only “looking for someone to blame.” Price said that she wasn’t the one who wrote the insults on the coffees, but was terminated because “Starbucks was trying to “save some face from their company.?

Price allegedly said she tried to make the situation right with the officer before he left the store. She then said that he just laughed it off and said it was “cool,” and she handed him a blueberry muffin as if nothing. That’s when she saw O’Mara’s Facebook post. She was ultimately fired after her supervisors called her later that evening, saying that they terminated her from her position with no cause.

for the record, my father has 0 business being a police officer. he was blatantly, proudly racist when i was a kid. said things i would never repeat. he treats women like dogs, including his own daughter. oink oink 🐖

To even complicate the whole situation a bit more, O’Mara’s posts managed to go around social media, which caught the attention of a woman who claimed to be O’Mara’s daughter, saying “he is absolutely a pig”. But, despite the mess, the police chief did state that he did not want the employee to be fired, asking Starbucks to reconsider their decision.

Still, hoping to put the incident in the past, both Starbucks and the Police Department are said to be working together. Through a joint statement, they stated they will conduct a Coffee with a Cop event at Starbucks “where local law enforcement can meet with baristas and members of the community to discuss the critical role dispatchers and police officers play in keeping our communities safe.”

Talk about one big confusing mess, am I right?

Editors Note: This article was originally published on December 3, 2019.