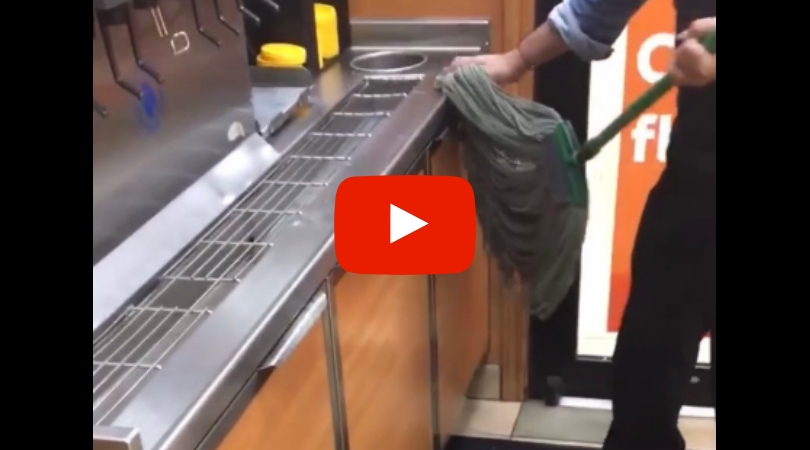 YUCK. Subway, you have some more explaining and less mopping to do. There is nothing, absolutely nothing fresh about this “food service.” If you live in Chicago, you might want to stay away from the Subway near 69th Street and Ashland. Authorities decided to shut down the restaurant after a video surfaced on social media showing a worker “sanitizing” a counter with a dirty mop that she had just used on the floor. She really couldn’t use paper towels?

The Chicago Department of Public Health hung a “License Suspended” sign on the fast food restaurant’s window, obviously, and locked the doors after telling customers they had to leave the sandwich shop. CBS 2 reported that according to the location’s inspection history, the restaurant had a number of issues throughout the years. Most notably, failing back to back inspection in 2017. Some of the issues included food not meeting the proper temperature requirements, and workers washing their hands with only water. It takes two seconds to squirt some hand sanitizer if you’re that lazy.

Here’s a short clip of the @SUBWAY worker using the mop to clean the soda counter. pic.twitter.com/8xBHVZWdU6

This isn’t the first time a subway employee was caught on camera doing something abominably gross. Back in January, a video shows a Subway worker caught putting her bare feet near the food preparation area where the footlong sandwiches are made. The health department also got word of the incident which took place in Michigan. Still, it doesn’t stop the fact that the employee, who was actually the owner’s wife, decided to just chill out and put her nasty feet near the food.

I don’t know, seems to me like these Subway employees might need some good good food safety, handwashing, and clean up training from their managers. No, you know what, get these Subway CEO’s to do a nationwide training, because this is getting out of hand.

Editor’s note: This article was originally published on September 26, 2019.