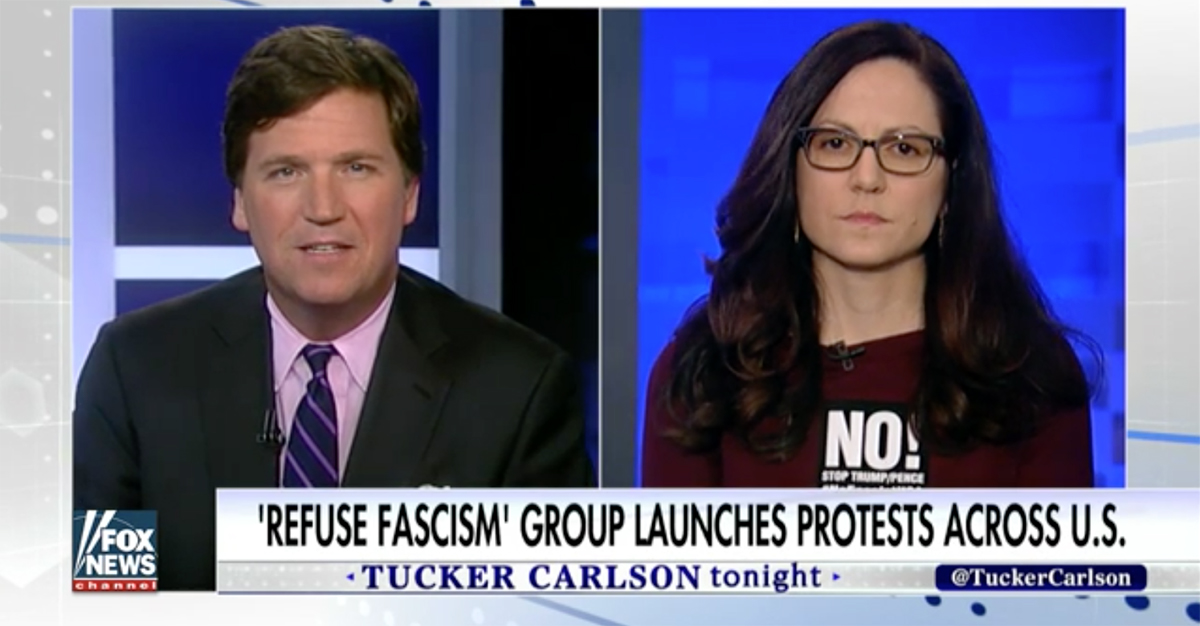 Fox News’ Tucker Carlson enjoys jousting with guests who offer viewpoints from the far end of the opposing political spectrum.

On Tuesday, that guest was Sunsara Taylor, the organizer of the anti-Donald Trump movement called “RefuseFascism.org.” While many have accused the new President of the United States of harboring authoritarian tendencies, Taylor takes a major leap from there, suggesting that Trump and Vice President Mike Pence need to be driven from power because they are operating out of “Hitler’s playbook.”

Tucker immediately took umbrage with her suggestion that the Trump administration is a dangerous fascist regime.

RELATED: Tucker Carlson digs into an NYU student who thinks he has it all figured out

“I’m assuming you’re not a moderate necessarily,” Carlson said, “but the obvious question arises which is, if it’s a fascist regime, how are you on this show?”

Taylor was ready to respond.

Look, we’re facing an emergency, humanity is facing an emergency. A fascist regime has seized the reins of power in the sole superpower in the world. Trump and Pence are operating out of Hitler’s playbook, only they have nuclear weapons. What RefuseFascism.org is saying to the world is that while it’s beautiful, it’s righteous that millions of people have stood up and protested and continue to do so — and by the way, since I know he sometimes watches: President Trump, if you’re watching, way more people have protested than were at your Nazi inauguration — but while this is beautiful, this resistance needs to grow and people need to confront that this is a fascist regime and is working aggressively to close down the space for people to stand up and resist

Carlson then suggested she must not really believe what she is saying and that this “must be play-acting for you.” He told her that if she were truly serious about her claims that Trump is tearing pages straight from Hitler’s playbook that she wouldn’t simply be making appearance on a talk show, but that she would be out “committing acts of violence, right?”

RELATED: People are irate about what Tucker Carlson’s guest said about college rape

Taylor shot back, “Actually he’s not like Hitler. He has a Twitter feed, he has that ugly orange thing on top of his head and he has nuclear weapons, the biggest nuclear arsenal in the world and people better wake up because he is more dangerous than Hitler ever could have been.”

Carlson, who invited her onto his show, continued to challenge the seriousness of her claims.

“I can see you’re spun up here. But let’s just be more specific because I want to take you seriously, I assume you’re being serious, hard as it is to believe when you use rhetoric like ‘he’s Hitler, he’s going to incinerate the world’; how are you going to stop him?”

She told Carlson that Trump has to be driven from power through mass political resistance, saying fascism advances through stages.

Carlson practically laughed at her.

“This is silly,” Carlson retorted before insulting his guest. “You don’t oppose fascism with political resistance, but whatever, you might not know that.”

Carlson added: “I get it, you’re morally outraged.”