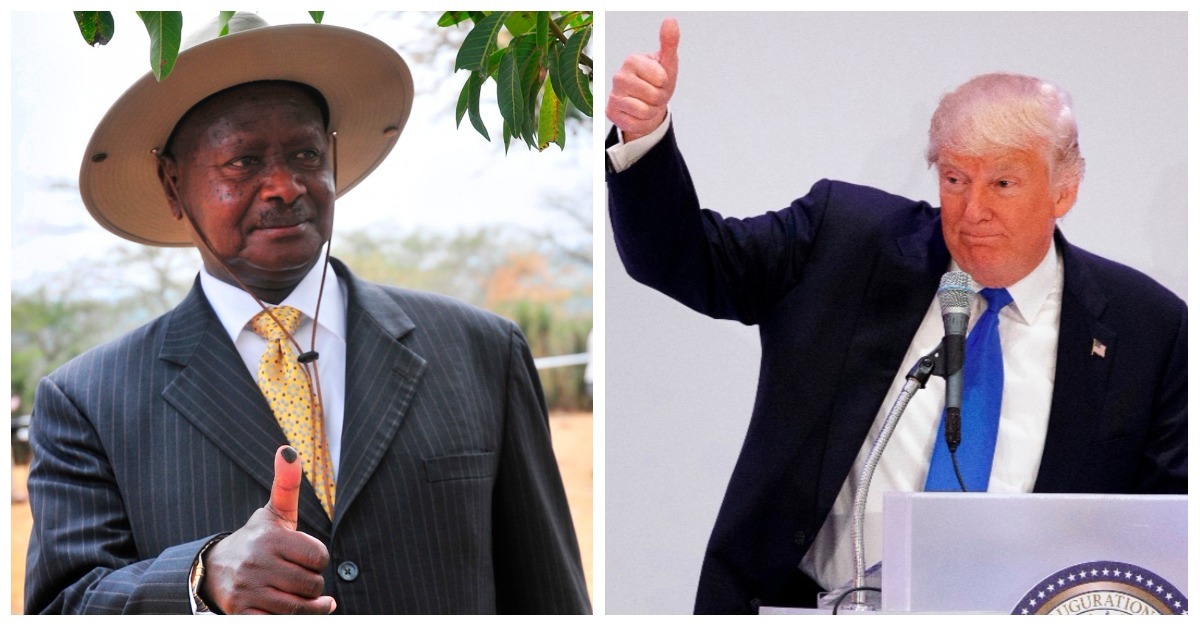 AP Photo/Ronald Kabuubi, AP Photo/Evan Vucci
Uganda's President Yoweri Museveni shows the ink mark on the thumb after he voted in Kiruhura district, which is Museveni's home area, at a polling station about 300 km (200 miles) west of Kampala, Uganda, Friday, Feb. 18, 2011. Voters in Uganda faced the choice Friday of extending their president's 25-year grip on power or joining the anti-incumbent wave sweeping Africa and the Middle East and voting Yoweri Museveni out of office. (AP Photo / Ronald Kabuubi), President-elect Donald Trump gives a thumbs-up as he speaks during the Leadership Luncheon at Trump International in Washington, Thursday, Jan. 19, 2017. (AP Photo/Evan Vucci)

While many U.S. lawmakers and politicians abroad reacted with condemnations of Donald Trump’s reported “sh*thole countries” remark, the president of Uganda responded by saying he loved the frankness.

America has got one of the best presidents ever. I love Trump. He speaks to Africans frankly. Africans need to solve their problems – Museveni #NTVNews pic.twitter.com/2LQcKg1qnb

?I don?t know whether he was misquoted or whatever. But he talks to Africans frankly. In the world, you cannot survive if you are weak,” he said. “America has got one of the best presidents ever, Mr. Trump.”

The Ugandan leader was addressing members of the regional East African Legislative Assembly.

The third purpose for integration is strategic security. Donald Trump speaks to Africans frankly. Africans need to solve their problems. You can't survive if you are weak. It is the Africans' fault that they are weak. We are12 times the size of India, but why are we not strong?

Museveni’s response was in stark contrast to that of the President of the Republic of Ghana Nana Akufo-Addo.

The language of @realDonaldTrump that the African continent, Haiti and El Salvador are “shithole countries” is extremely unfortunate. We are certainly not a “shithole country”. We will not accept such insults, even from a leader of a friendly country, no matter how powerful.

Whoa. I’ve never seen a statement like this by African countries directed at the United States. After an emergency mtng today @UN, Africa group says it “is extremely appalled at…outrageous & xenophobic remarks” attributed to Trump & “demands a retraction and an apology.” pic.twitter.com/5KkdwppUzL

Trump has denied using that vulgar language in particular, instead calling the language “tough.” Others present in the meeting, like Sen. Dick Durbin (D-Ill.) said that he did.