The Internet is Convinced Wayfair is Trafficking Children 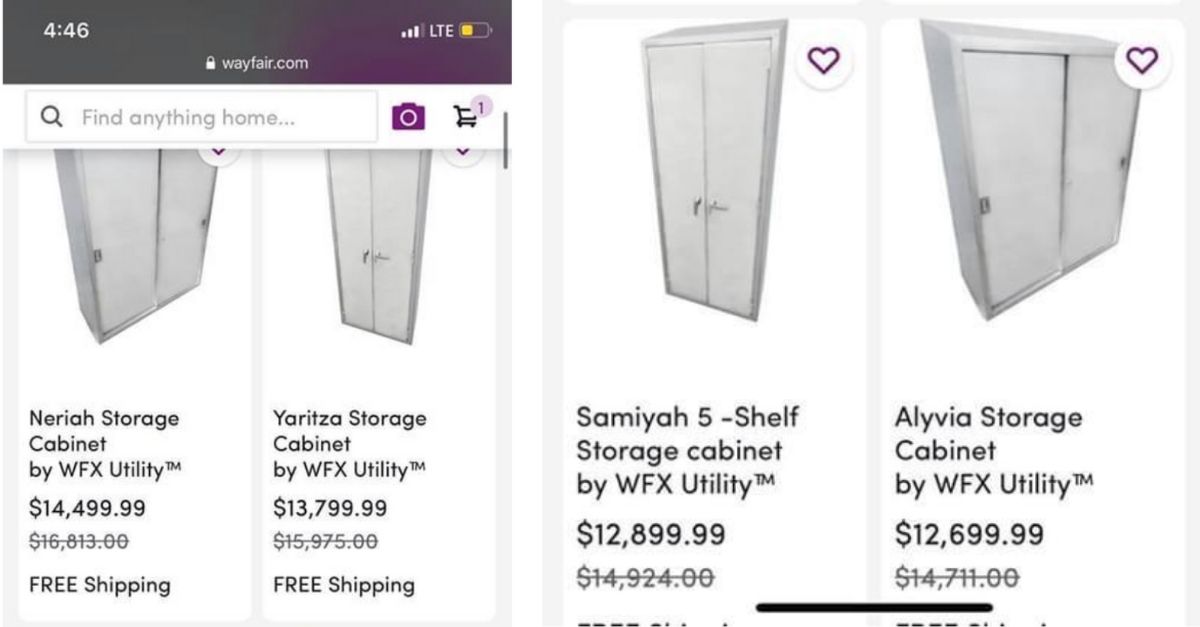 A new conspiracy theory is roaming around the internet involving one of the most popular home goods and furniture seller companies. Twitter users believe Wayfair is partaking in a worldwide pedophilic sex trafficking among wealthy users. The conspiracy first surfaced on Reddit, after a user posted an image of Wayfai’s WFX Utility collection, which showed extremely overpriced cabinets.

The storage cabinets each have what appears to be female names (Neriah, Yaritza, Alyvia, and Samiyah) with prices ranging from $12,699.99 to $14,499.99. The post, published by PrincessPeach1987, read, “Is it possible Wayfair involved in Human trafficking with their WFX Utility collection? Or are these just extremely overpriced cabinets? (Note the names of the cabinets) this makes me sick to my stomach if it’s true.”

Is it possible Wayfair involved in Human trafficking with their WFX Utility collection? Or are these just extremely overpriced cabinets? (Note the names of the cabinets) this makes me sick to my stomach if it’s true 🙁 from conspiracy

Twitter has also had their fair share of comments on the situation, believing the company is indeed selling “missing children and women” through their high-priced cabinets and pillow which cost nearly $10,000 to $12,000 which were shown through screenshots. Twitter users began to post pictures of the website’s high priced cabinets, claiming they are listed alongside people’s names. Although the cabinets or “large boxes” look like the same product, several have different names, mostly of girls and of missing children.

One Twitter user wrote, “So all the names pull up missing females I searched Neriah and she is missing since 2010 YARITZA is also a missing female.” Several also stated that after people began talking about the suspicious cabinet, the particular listings disappeared from the website. While other noted people could still Google search engine those images from the website.

I’m not sure who uses Wayfair but this is really fucking suspicious if you ask me. A conspiracy has surfaced that Wayfair is a part of the sex trafficking ring. Over-priced cabinets with female names??? Not so sure it’s a “conspiracy” with this evidence. pic.twitter.com/Mr8yGNGMvO

As far as if the claims are true or it’s it is indeed a mistake from the company, that has yet to be known. But, the company did speak to Newsweek after they questioned the company regarding the human trafficking conspiracy theories, urging for an explanation of the overpriced items. The company released a statement, noting the following,

“There is, of course, no truth to these claims. The products in question are industrial grade cabinets that are accurately priced. Recognizing that the photos and descriptions provided by the supplier did not adequately explain the high price point, we have temporarily removed the products from the site to rename them and to provide a more in-depth description and photos that accurately depict the product to clarify the price point.”

As we all know, there are always two sides to every story, but here, who knows really. I?m still waiting for the police to release an official statement or something. Still, it’s pretty crazy to think about how powerful social media is. This Wayfair conspiracy theory is really taking on a life of its own.

Watch: Pedophile Faints In Court After Judge Sentences Him to 260 Years For Child Abuse