A dad from O’Fallon, Missouri said he was “disgusted” and felt he had “no other option” but to report his 17-year-old son to the police after confiscating his phone as punishment for unrelated behavior problems and discovering two photos of a naked 2-year-old girl.

Paul Spensperger not only reported his son 17-year-old Andrew to the police but also refuses to bail him out because he needs to “learn.”

“He feels like s**t. He feels remorse and he is scared, he’s facing time in prison. I could go and get him but he needs to learn,” Spensberger explained to the Daily Mail.

The O’Fallon Police Department said in a press release on Tuesday that Spensberger called the police on Dec. 30, 2017 to report that his son had photos of a 2-year-old relative of “the reporting party’s girlfriend.”

Here was the information police released to the public.

On 12/30/17, the O’Fallon Police Department received a call to the 400 block of Vine St regarding inappropriate pictures located on a cellular phone used by the reporting party’s son.

The photos were of a 2 year old relative of the reporting party’s girlfriend.

During the investigation it was revealed that the suspect had planned to sell the photos for cash.

Andrew Spensberger, who now faces a felony child pornography possession charge, admitted when questioned that he took the photos to sell them to a classmate “whom he believed to be a pedophile and would be interested in young girls” for $350, the St. Louis Post-Dispatch reported.

“[Andrew] was in a bind […] and I have no doubt there are kids at his school that would buy s*** like that,” Paul Spensberger told the Daily Mail. “It’s disgusting, it’s unethical and it should never happen.”

Spensberger was applauded by people online for doing the “brave” thing and calling the police. 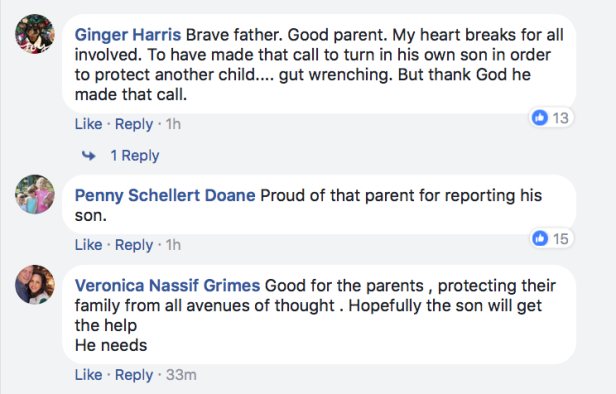 Andrew Spensberger could face four years behind bars if convicted.

The victim’s family has reportedly forgiven him.