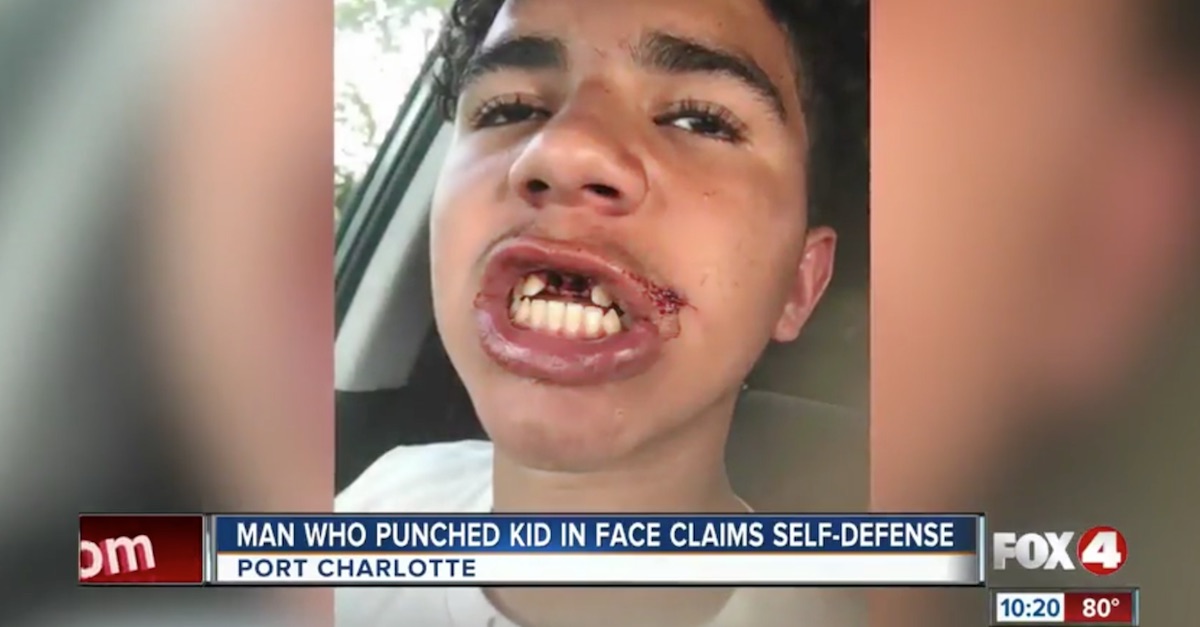 A mother in Charlotte County said her 12-year-old son got punched in the face by a man on Wednesday, knocking out his front teeth and busting his lip.

RELATED: A neighbor who didn?t hesitate to shoot and kill a would-be drowner of twin babies has officially been ruled justified

Now she is upset and confused as to why the man did not get arrested, Fox 4 reports.

?When I realized my teeth were dangling in my mouth it was kind of shocking, I didn’t know what was going on,” the boy said to Fox 4. He also said the man used the n-word.

Charlotte County Sheriff?s Office deputies said that Vincent Cerfalo, 27, is the man who hit the boy, Fox 4 reports. Cerfalo said to Fox 4 that the incident happened when he yelled at the boy and a group of kids to get out of the road because they were blocking traffic.

?I told them to back off and if they come on my property I’m going to defend myself. They said, ‘you won’t hit us, you won’t hit us,’ and they started to surround me,” Cerfalo said to Fox 4.

Cellphone video shows the moment the boy got punched in the face, but Cerfalo said he acted out of self defense when the boy touched him.

Cerfalo said he plans to press charges against the 12-year-old, but the children said he was never touched during the incident.

RELATED: They picked the wrong target: two armed robbers were shot dead on camera by a California homeowner

The Sheriff?s Office said the ?best course of action? was to hand the case over to the State Attorney?s Office ?due to conflicting witness statements,? Fox 4 reports.