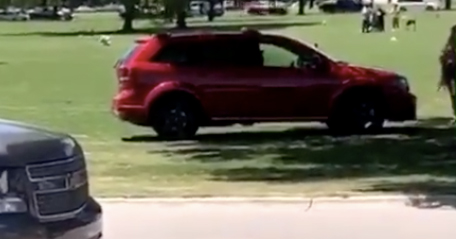 A Houston woman was filmed driving her minivan over the graves of dozens of veterans on, of all days, V-E Day, to avoid a traffic jam inside the Houston National Cemetery.

The woman was at the Houston National Cemetery, like numerous other people there and causing the traffic jam, to watch a flyover by the Lone Star Flight Museum to commemorate the 75th anniversary of VE Day, which marks the day the Allies declared victory in World War II in Europe.

As everyone’s cars were filing out of the narrow-roaded cemetery it seems the woman grew impatient about how long it was taking her to leave — maybe she had an appointment to use some grave a little boy dug his dead gerbil as a toilet and was running late? — and decided to pop up on the grass to bypass the other cars.

The problem, however, is that at cemeteries the grassy parts are typically where they put the graves, and at military cemeteries, those graves have war heroes and veterans in them.

Jeremiah Johnston, whose grandparents are buried at the cemetery, filmed the woman take the world’s worst detour while others at the cemetery attempted to block her from driving over any more graves.

According to bystanders, the woman seemed totally unfazed by what she was doing and did not seem to care about the fact that she was driving over the graves of veterans to avoid ten extra minutes of traffic.

1. Please find this lady and make her scrub that entire cemetery with a toothbrush. A bad toothbrush. The kind you get for less than a dollar at the dollar store. The kind that’s not even capable of actually cleaning anything.

2. You’d think that living in Houston would make you tolerant enough of traffic to be able to reason, “Well I’ve been in worse jams, I suppose I don’t need to drive over the graves of dead soldiers” but Goddamn I guess not.

Watch: 96-Year-Old WWII Veteran Dances After He and His Wife Beat COVID-19