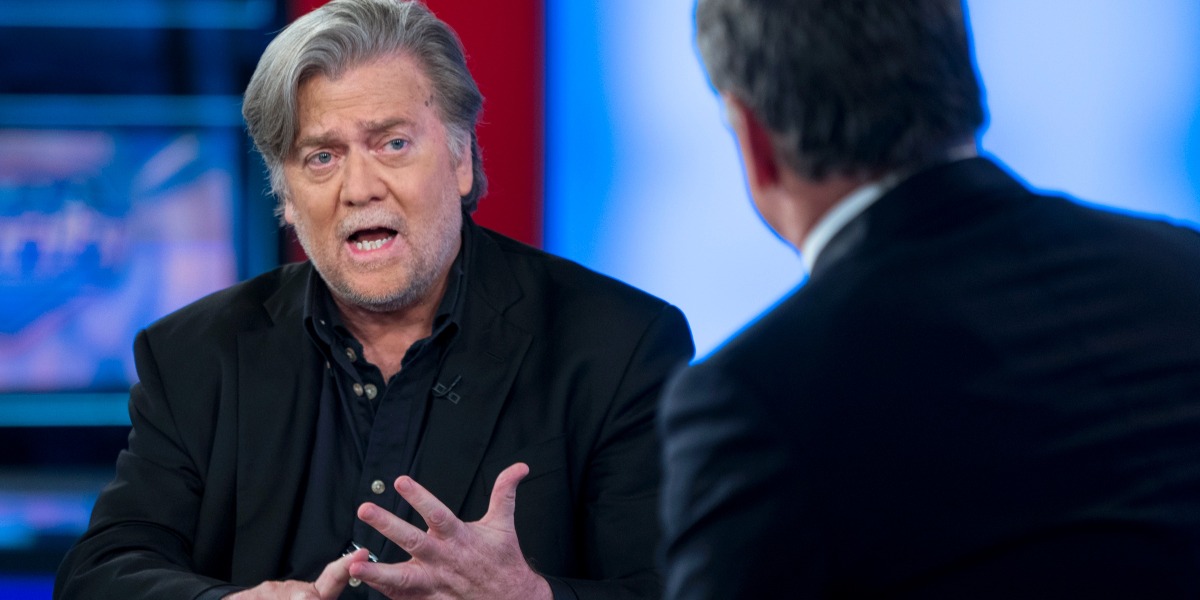 Steve Bannon, the rumpled, unkempt, unshaven former White House political strategist, is on the warpath.  He?s got his old bomber jacket, his Breitbart mouthpiece, his ambition and wealthy financial backers behind him, ready to kick ass and take names. The enemy: the GOP establishment Bannon portrays as too cowardly, cautious and corrupt to pass President Donald Trump?s legislative agenda on immigration, health care, infrastructure and everything else in between.

RARE POV: Steve Bannon might be gone, but he?s not going to leave silently

During his first major television interview on 60 Minutes, Bannon told Charlie Rose that he was gunning for Senate Majority Leader Mitch McConnell, his leadership team and any establishment Republican lawmaker who is insufficiently pious at the altar of Trump. He expanded upon his plans on Sean Hannity?s show: ?Remember, I said I’m going after the Republican establishment.  And we are going to go after them. We’re going to challenge.?

And it looks like he?s deadly serious. Bannon is looking for nationalist insurgent candidates across the board, diving into Senate races that would in more conventional years be written off as Republican landslides. Orrin Hatch of Utah has been a U.S. senator since January 1977, a time when President Jimmy Carter was just inaugurated, Iran was still ruled by the Shah and New York City was considered a wasteland of dirt, grime and crime. During his last election, Hatch was thought to be vulnerable to a Tea Party challenger. That vulnerability turned out to be misplaced, with the longtime senator using his considerable war chest to win the GOP nomination and beat his Democratic challenger by 35 points. Normally, nobody would waste their time in Utah.

Bannon, however, doesn?t care about precedent. To the Breitbart crew, Hatch is just the Utah version of Mitch McConnell, a member of the clique of career politicians ruled by wealthy establishment donors, open to providing ?amnesty? to the Dreamers, and disloyal and condescending to a president (and nominal leader of their party) they don?t respect. All of them need to be held accountable depending on what they do or don?t do for Trump. The fact that Hatch is a reliable conservative vote on pretty much every topic is glossed over. Breitbart doesn?t care much for nuance; Hatch, McConnell, Mississippi?s Roger Wicker, Nevada?s Dean Heller and Arizona?s Jeff Flake are just as bad as Chuck Schumer and Nancy Pelosi, in cahoots with each other to keep Washington under the iron grip of the aforementioned establishment class.

For Senate Republican incumbents, all of this intramural infighting within the party is an unnecessary distraction during an election cycle where 25 Democratic seats are up, 10 of which are in states Trump won last year. The only truly shaky GOP incumbents are Heller and Flake, two lawmakers who are either running in light blue states (Heller in Nevada) or who have low approval ratings and a strong Democratic challenger (Flake).  2018 was supposed to be a year when Republicans increase their four-seat Senate majority through wins in Ohio, North Dakota, Missouri and maybe even Pennsylvania. Bannon has in effect chewed up those plans and spit them back into McConnell?s face. And the more insurgent candidates Bannon recruits, the more time and money the Senate Majority PAC and the National Republican Senatorial Committee will need to spend in order to protect incumbents in the primaries.

Republicans will complain that Bannon isn’t a team player or helping the conservative cause, but the boys at Breitbart don?t give a damn.