Another day, another escalation between the United States and Russia 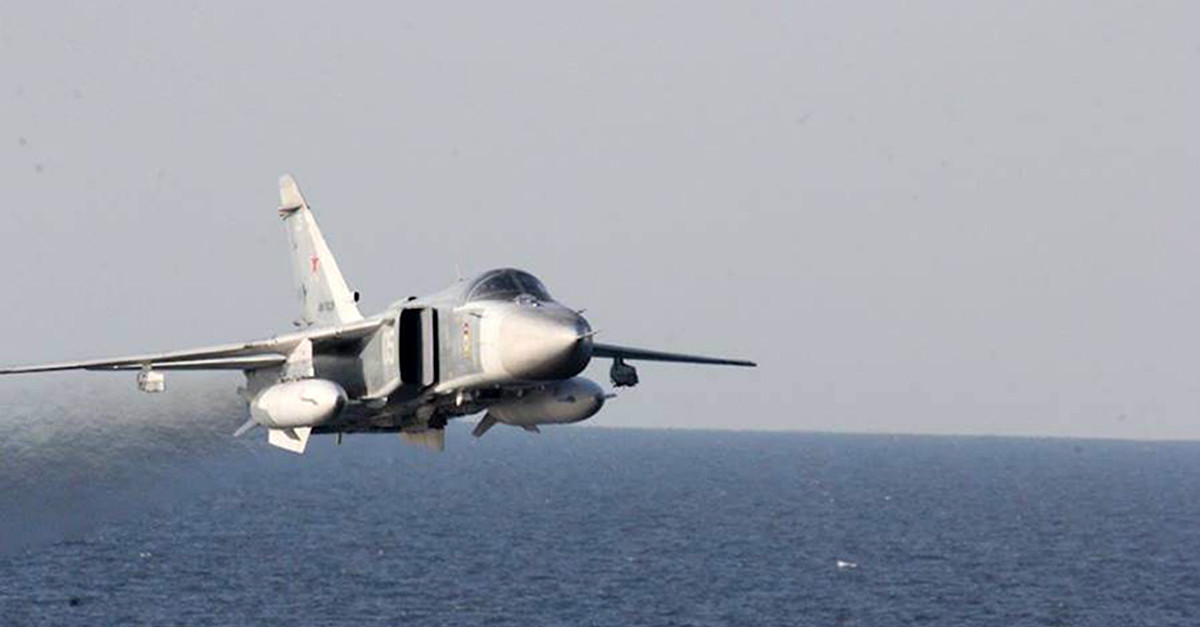 U.S. Navy via AP, File
In this Tuesday, April 12, 2016 file photo provided by the U.S. Navy, a Russian Sukhoi Su-24 attack aircraft makes a low altitude pass by the USS Donald Cook in the Baltic Sea. U.S. officials said the guided-missile destroyer was operating in international waters 70 nautical miles off the Russian enclave of Kaliningrad. Wedged between NATO members Poland and Lithuanian and the Baltic Sea, Kaliningrad is vital to Russia's strategic position. It was Russian jets from Kaliningrad that buzzed a U.S. warship in the Baltic Sea and barrel-rolled a U.S. Air Force reconnaissance plane earlier this year, incidents which Washington denounced as dangerous and provocative. (U.S. Navy via AP, File)

Last September, an American jet accidentally dropped a bomb on regime forces in eastern Syria, killing 62 of them and wounding 100. Bashar al-Assad’s ilk immediately pounced, accusing Washington of masterminding the deaths and calling the incident “a very serious and flagrant aggression.” It wasn’t though; it was a genuine mistake and the United States acknowledged the lethal error.

The days of “accidentally” in Syria are now over. Our ill-considered (and undeclared) hostilities against Assad and his Iranian and Russian benefactors are now very purposeful, and the implications for our foreign policy are huge. This month has seen American forces attack a regime tank convoy, an Iranian-made drone, a Syrian jet, and now another drone, this one also made in Iran. The latest in this unprecedented sequence of escalations didn’t go unnoticed. Earlier today, a Russian Su-27 jet with missiles under its wings swooped within five feet of an American reconnaissance plane flying over the Baltic Sea.

Skywriting “f**k off” above the White House would have been the only way for the pilot to send a clearer message. Russia’s and America’s aircraft have frequently crossed paths above the Baltic, but never so close and in such a fraught context. It’s undeniable now: Washington and Moscow have hit a post-Cold War nadir—and less than five months after we inaugurated a president who was supposed to reset relations for real this time. Those of us who worried electing Hillary Clinton would unnecessarily foment hostilities in Syria have been chastened; Trump did it without even trying to create a safe zone.

And of course, plenty of experts are egging him on:

= Finally concluding #Moscow has no leverage.

I’m not sure what quadrant of the galaxy you have to be caroming through to believe that “Moscow has no leverage” in Syria—only thousands of boots on the ground, substantial airpower, clout with Iranian and Assadist forces, a naval base at Tartus that they’re motivated to fight for. It’s that old myth of the United States as omnipotent supra-nation before which all other countries’ advantages are nullified, and it’s so alluring that some commentators evidently believe we can dial up our confrontations with a military power and suffer no consequences.

“No leverage”? Already Moscow has exacted a toll. Their recent suspension of the so-called deconfliction channel after we shot down that Syrian jet led Australia to halt its air operations over Syria on Tuesday. The Australians were helping us fight ISIS, whose self-styled capital, Raqqa, we’re hoping to soon take back. “This is not the time for the coalition to be in disarray,” Dr. Lina Khatib, an international affairs expert at Chatham House, warned CNN. Yet disarray it is. The idea that we can take on both ISIS and the Assad coalition without one affecting the other has always been nonsense.

The problem now is that everyone in Syria is crossing everyone else’s red lines, Assad by refusing to respect our deconfliction zones, us by ignoring Russia’s demand for a no-fly zone west of the Euphrates. No one seems to be thinking about what will happen next. America is still that buoy of liberal principles on choppy waters, but that doesn’t mean we’re exempt from this calculation: Is it worth risking a military clash with Russia over arid eastern Syria? I’ve been asking that question for days and I’ll keep asking it because the Trump administration doesn’t seem to have even posed the query let alone formulated an answer.

We’re dancing very close to the fire right now and I’m troubled about what may come next.