In contrast to the gust of Teutonic apathy sent his way by German Chancellor Angela Merkel last week was Donald Trump’s warm reception by another American partner. Following a meeting with Deputy Crown Prince Mohammed bin Salman, our great and glorious ally Saudi Arabia released a statement hailing a “historic turning point” in American-Saudi relations and gushing over Trump’s “great understanding” of the partnership. Using Trump’s preferred title, they referred to our president as “his excellency.”

Why would the Saudi royals lie supine before a man who during his presidential campaign threatened to suspend American purchases of oil from Riyadh and insisted that “without us, Saudi Arabia wouldn’t exist for very long”? It’s part savvy strategy—they understand flattery of Trump always achieves results—and part gratitude for Trump’s support of their upcoming economic overhaul.

But it’s something else, too, something that has nothing to do with supply and demand. The Saudis, more than anything else, are committed to curbing Iranian influence in the Middle East, primarily for sectarian reasons, with Riyadh personifying Sunni power and Tehran representing the Shias. Theirs is a superannuated cold war and the United States should have patience with it. Our interest is in ensuring that, with the collapse of the Hussein and Gaddafi and Assad regimes having cast the Middle East into chaos, the relatively stable Saudi and Iranian governments are preserved as competitive but responsible stewards of sectarian power in the region, a reboot of Richard Nixon’s “twin pillars” strategy, while ISIS and al-Qaeda are fought and destroyed.

RELATED: The Trump administration’s decision to keep arming the Saudis is unconscionable

Trump, despite his initial nudging of Riyadh, has made it clear that he subscribes to the old model of American strategy, in which we side with the Sunni states against the Shiite ones, with Saudi Arabia our unwavering ally and Iran our eternal foe. To that end, he’s taken a number of actions that have turned frowns upside-down across the Saudi monarchy. On the nuclear deal, he’s threatened it and slapped new sanctions on Tehran for its ballistic missile tests, all of which is looked upon as an invaluable gift by the Saudis who had reached the end of their fuse with Obama’s overtures to Iran. This despite the fact that the nuclear deal is working and unquestionably in our national interest.

Even more encouraging for the Saudis has been Trump’s attitude towards Yemen, where Riyadh is waging one of the cruelest and most pointless wars in recent Middle Eastern history, all in the name of playing whack-a-mole with a group of Shiite Houthi rebels (scratch any Saudi initiative and you inevitably find sectarianism lurking beneath). Barack Obama supported this intervention with some insisted-upon limits, like that the Saudis couldn’t blockade ports on Yemen’s west coast through which its already-famished people were receiving meager food supplies. Obama also canceled an arms deal with Riyadh after Saudi pilots repeatedly used American-made bombs to incinerate civilian targets, a funeral and a marketplace, among others.

Trump has removed even these feeblest of restraints. The weapons agreement axed by Obama has been reinstated by the president’s one-man State Department. And the integral port city of al-Hudaydah, through much of Yemen’s scant food supply enters the country, is now under total Saudi blockade, according to a source on the ground who spoke to the Huffington Post last month. Factor in concurrent bombings in the nearby port city of Mokha and you realize this is exactly as it appears: a policy that tolerates mass civilian starvation as the price of victory. Similar tactics employed by the Assad regime in Syria have drawn sulfurous denunciations from the West; in Yemen, they elicit only silence.

This is how you win accolades from our great and glorious ally: immiserate innocents, tolerate a deeply stupid religious cold war, subvert your own nation’s interests to those of a depraved desert kingdom, all without any assurances that the Saudis will crack down on their country’s terrorism philanthropists or board up their Ministry of Islamic Affairs or absorb more Syrian refugees or get serious about combating their al-Qaeda Frankenstein monster. But Yemen’s gory little war—that rages on. You can thank his excellency for that. 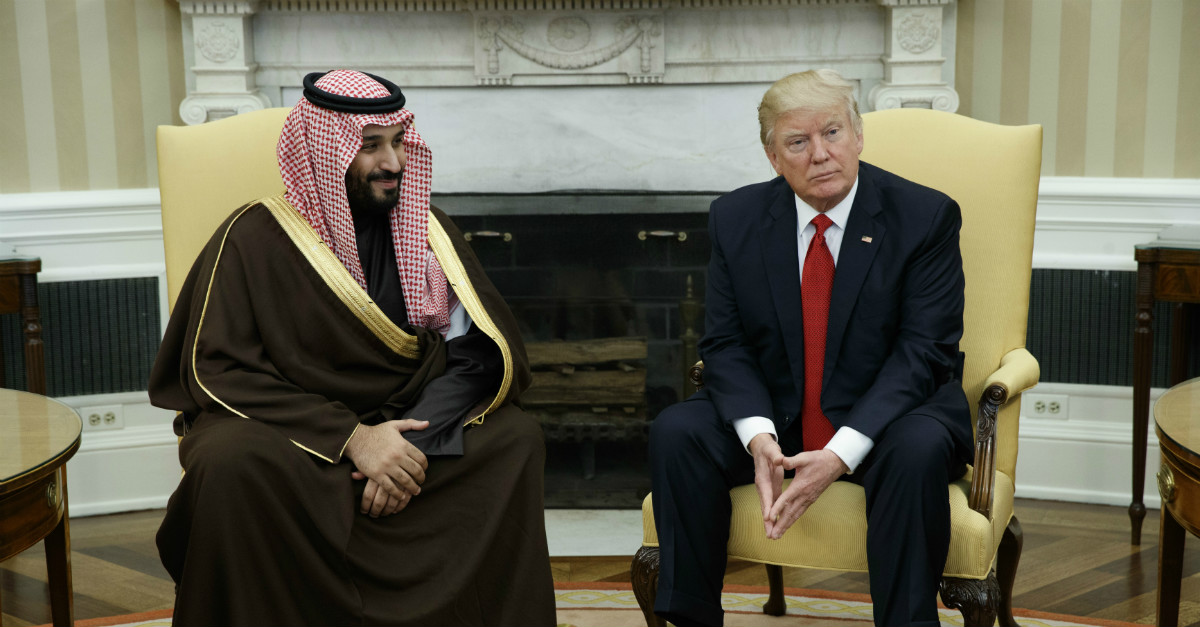