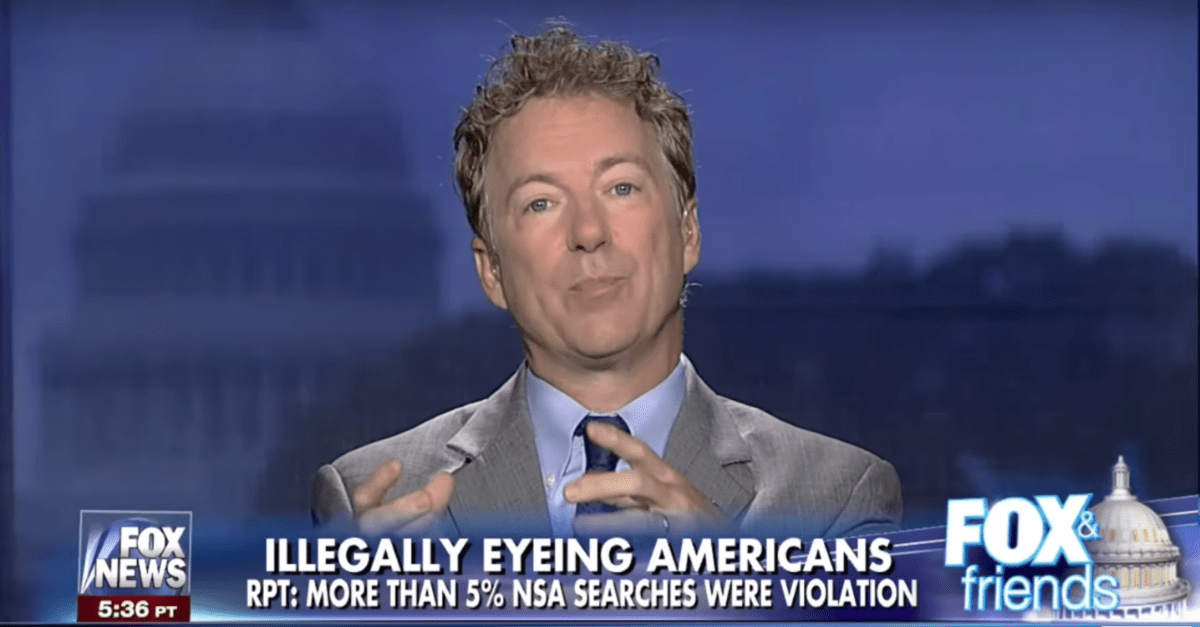 Remember earlier this month when Rand Paul wondered if the Obama administration had spied on him?

Did the Obama admin use warrantless "wiretapping" on other candidates besides @realDonaldTrump? https://t.co/h7rsjvNLHM

I have formally requested from the WH and the Intel Committees info on whether I was surveilled by Obama admin and or the Intel community!

Paul’s inquiry stemmed from President Trump claiming that the Obama administration had “wiretapped” Trump Tower and his campaign, something then FBI Director James Comey, NSA Director Mike Rogers and Republican House Intelligence Committee Chairman Devin Nunes said there was no evidence for.

Sen. Paul continued to defend Trump’s assertion, adding that more political figures than just Trump were likely “unmasked” by the previous administration, and the senator also claimed that two reporters told him that he had been surveilled by the Obama administration.

At the time, more than a few on the left mocked Paul. Vanity Fair’s Maya Kosoff made fun of the senator, writing, “It’s not clear whether this is a cry for help or attention, or whether Paul has simply been spending too much time next to Kellyanne Conway’s microwave.”

“His series of tweets linked to a Circa report on N.S.A. surveillance, claiming that the agency collected and ‘searched’ information pertaining to nearly 2,000 Americans abroad in 2016, after loosening privacy protections in 2011,” Kosoff noted.

On Wednesday according to a new report by Circa, the 2,000 Americans abroad that Obama allegedly spied on was minuscule compared to the totality of the National Security Agency’s surveillance of U.S. citizens at home.

Circa reporters Jonathan Solomon and Sara Carter surmised, “The National Security Agency under former President Barack Obama routinely violated American privacy protections while scouring through overseas intercepts and failed to disclose the extent of the problems until the final days before Donald Trump was elected president last fall, according to once top-secret documents that chronicle some of the most serious constitutional abuses to date by the U.S. intelligence community.”

The Circa report continued:

More than 5 percent, or one out of every 20 searches seeking upstream Internet data on Americans inside the NSA’s so-called Section 702 database violated the safeguards Obama and his intelligence chiefs vowed to follow in 2011, according to one classified internal report reviewed by Circa.

The Obama administration self-disclosed the problems at a closed-door hearing Oct. 26 before the Foreign Intelligence Surveillance Court that set off alarm. Trump was elected less than two weeks later.

.@RandPaul decries NSA program as a "backdoor way to sort of get at Americans' privacy without using a warrant" pic.twitter.com/fbPStGAXsg

According to Circa, “the NSA’s Signal Intelligence Directorate, the nation’s main foreign surveillance arm, wrote a letter back to the IG saying it agreed with the findings and that ‘corrective action plans’ are in the works.”

It should be noted that the primary reason whistleblower Edward Snowden cites for his 2013 leaks is when NSA head James Clapper told Sen. Ron Wyden during a Senate Intelligence Committee hearing that his agency did not collect Americans’ metadata en masse. We later learned that the NSA had been collecting metadata, thanks to Mr. Snowden.

President Obama too, during that time and since, would reassure Americans that mass surveillance of citizens was not occurring, while also claiming to implement reforms, post-Snowden.

If Wednesday’s Circa report is correct, and the NSA itself seems not to dispute the findings, then Obama officials were not being truthful about their surveillance practices.

And Rand Paul has a point — were he or other politicians, including Donald Trump, surveilled by the Obama administration?

Sen. Paul told Fox News on Wednesday when asked about the report, “We shouldn’t suck up everybody’s phone calls and everybody’s internet transmission, and the danger is, and one of the accusations of Susan Rice and others, is that they were looking at this information politically, searching opponents, and going after people in the Trump transition to try to bring them down.”

“If the allegations are true,” Paul told Fox News. “This is an enormous story, and it will dwarf all the other stories.”