Menu
Follow us
Search
Menu
Search
DES MOINES, IA - FEBRUARY 1: Senator Rand Paul (R-TX) departs after speaking during a caucus day rally at his Des Moines headquarters on February 1, 2016 in Des Moines, Iowa. The Presidential hopeful was accompanied by his wife, Kelly, mother, Carol Wells and his father, former Congressman Ron Paul. Pauls were there to thank all the staff and volunteers for all their hard work in Iowa. (Photo by Pete Marovich/Getty Images)

In 2015, the Republican House majority voted overwhelmingly to repeal Obamacare.

There was a unified front. House Speaker Paul Ryan even bragged about it:

THIS IS A FIRST → a bill repealing #Obamacare will be sent to the president's desk. https://t.co/DEhuKJ6j95 pic.twitter.com/86lMTCCUpI

RELATED: Rand Paul: “I don’t think ‘ObamaCare-lite’ is what we should do”

But did he mean it?

How many of those Republican who voted to repeal in 2015 meant it, and for how many was it simply a publicity stunt before the 2016 election that they knew President Obama would never sign?

These are the questions Sen. Rand Paul has been asking all year.

In an early January op-ed at Rare, Paul said that Republicans should not only repeal Obamacare but have a free market-based plan to replace it. Later that month, the senator unveiled his Obamacare Replacement Act in conjunction with calling for a full repeal. Two weeks ago, Rep. Mark Sanford introduced his House companion legislation to Paul’s senate bill (that Congressman Sanford also previewed in a Rare op-ed).

Sen. Paul told Fox News’ Neil Cavuto at the time, “I think the replacement plan that we’ve put forward is now the conservative plan, and the House Freedom Caucus has endorsed it.” The senator continued, “I would say that the Republican establishment position is, is that they’re going to keep parts of Obamacare. I don’t think ‘Obamacare-lite’ is what we should do,” Paul said.

“The House was elected Republican in 2010, the Senate in 2014 and then the White House in 2016 on a promise that we would repeal Obamacare — root and branch — and I think we should do it,” Paul said.

There were reports that Paul walked out of House Republican meeting with Paul Ryan because leadership seemed to be backing away from a full repeal. Politico reported on Feb. 14: “Consider Paul Ryan’s feel-good meeting with Senate Republicans on Tuesday. The House speaker trekked across the Capitol to reassure senators that lawmakers are making more progress toward repealing the health care law than the media are reporting.”

But not everyone was buying it. Sen. Rand Paul (R-Ky.) left before it was over, having heard enough of a conversation that he says centers around keeping Obamacare’s Medicaid expansion intact and creating tax credits that he called a “new entitlement program,” though a Republican in the room rebutted the notion that the topic of Medicaid expansion came up in the Tuesday meeting with Ryan.

“’I hear things that are unacceptable to me,’ Paul said in an interview afterward,” Politico reported.

“If they don’t seem to care what conservatives think about complete repeal of Obamacare, they’re going to be shocked when they count the votes.”

Now it might be time for Republican leaders to do the math.

On Monday, Paul was joined by Senators Mike Lee and Ted Cruz in declaring that the 2015 vote must be the minimum level of repeal.

2 yrs ago, the GOP Congress voted to repeal Obamacare. That 2015 repeal language should be the floor, the bare minimum. #FullRepeal

2 yrs ago, GOP Congress voted to repeal #Obamacare. That 2015 repeal language should be the minimum. #FullRepeal @SenTedCruz @SenRandPauI

2 yrs ago, GOP Congress voted to repeal #Obamacare. That 2015 repeal language should be the minimum. #FullRepeal @SenMikeLee @SenRandPauI

This makes things interesting because, as Politico observed on Monday, “Republicans would likely need 50 of the 52 GOP senators to vote for a repeal-and-replace bill, so the trio could sink any proposal they dislike.”

On Monday, these senators also received the restated support of House Freedom Caucus Chairman Congressman Mark Meadows and his group’s efforts to lead these efforts.

I support my friends @RandPaul, @SenMikeLee, and @tedcruz. Every tax, every mandate, every regulation of #Obamacare needs to go. https://t.co/zdlxLYRrqF

We made a promise to the American people. The Freedom Caucus remains 100% committed to full repeal & replace https://t.co/qcwkk6wjvZ

The Associated Press reported Tuesday, “Republicans confronted a conservative rebellion in their own party Tuesday over their long-promised plans to repeal and replace the health care law, and beseeched President Donald Trump to settle the dispute in his first speech to a joint session of Congress.”

What might President Trump say tonight about Obamacare in his first address to Congress? Time will tell.

But on repealing Obamacare in full, Rand Paul and his allies could have the last word. 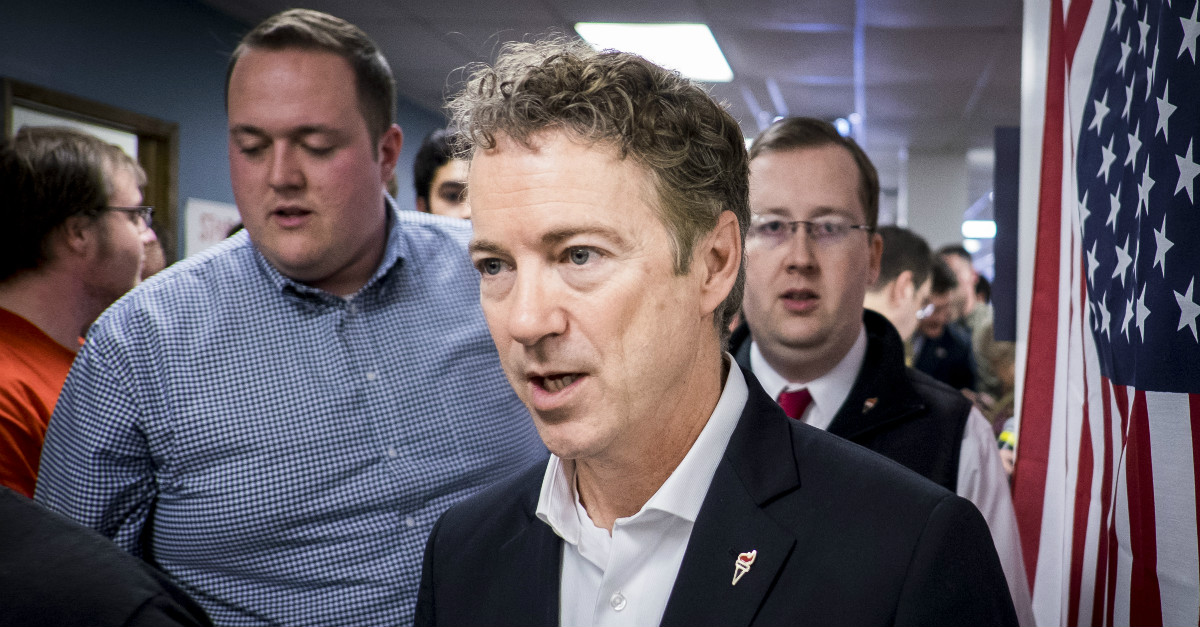