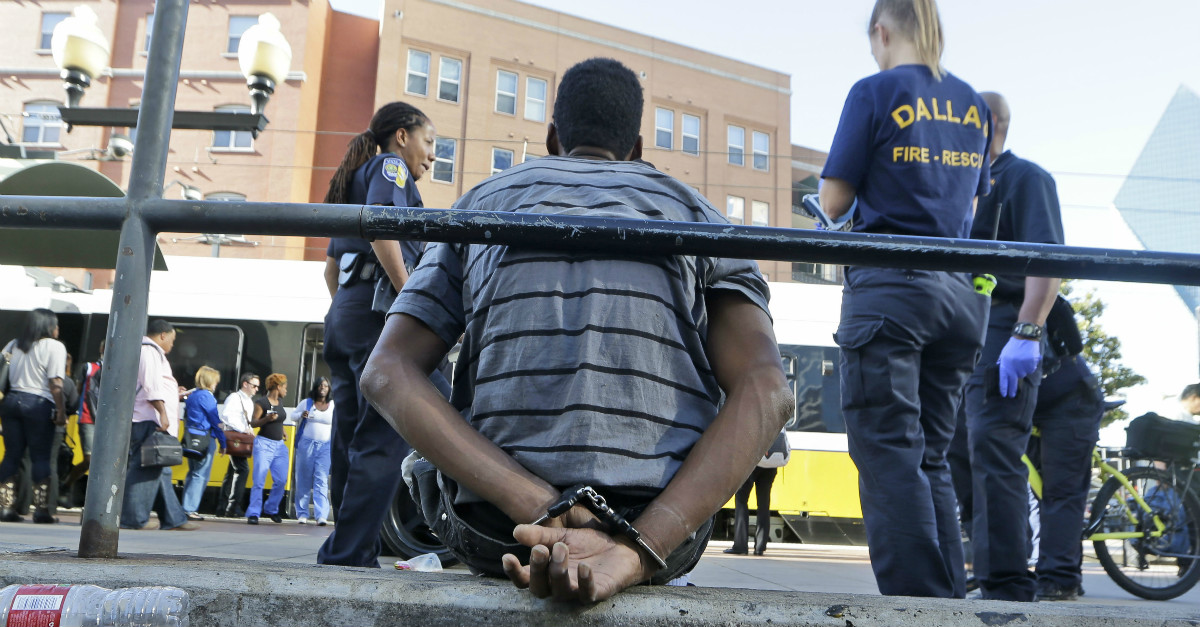 AP Photo/LM Otero
A man sits handcuffed and unresponsive as first responders wait to transport him from a DART (Dallas Area Rapid Transit) rail stop during rush hour in downtown Dallas, Monday, Sept. 22, 2014. According to police on the scene the man had smoked K2, also known as "spice," a synthetic marijuana known to cause hallucinations and violent behavior. (AP Photo/LM Otero)

In a week or so, the debate dies down, until next time.

It?s been six days since the Parkland high school shooting in Florida. This time, some media observers say, is different, because the victims, students, are speaking out. Setting aside that many in the media choose only to highlight one side of an array of student opinions, the observers could be right.

Nevertheless, formulating policies and laws based primarily on emotional reactions remains a horrible idea that usually ends up trampling on people?s rights. (Think, say, the 1995 Crime Bill or the 2001 PATRIOT Act) And so if this cycle of the gun debate is to extend beyond the talking point ping-pong, the implications for civil rights and civil liberties have to remain in the forefront of any serious discussion about new policies.

RARE POV: Dallas gave the NRA $410,000 for its convention: should your tax dollars fund private groups you might not agree with?

It?s not just about the Second Amendment, the topic of many of the first-round talking points. The right to bear arms is, of course, fundamental, providing firepower for the idea that the people, not the government, are sovereign.

But far less discussed in the debate over gun control are the problems within the criminal justice system that would be tasked to implement gun control. Since the Ferguson protests in 2014, the issue of police violence has drawn national attention. Unfortunately, the lessons taken from those discussions have not yet substantively translated to this debate. As in many other debates involving a push for more government control, the role the present, actually-existing criminal justice system must play in making those nanny state fantasies a dystopian reality.

Mass shootings are rare?they account for less than one percent of all gun deaths, even using the loosest definition of a mass shooting, one where at least 4 individuals are shot and killed. Their victims are also atypical of gun violence victims. 66 percent of all murder victims killed with a gun are African Americans, most are men.

Mass shootings, then, become a rallying cry for greater gun control measures, but those measures, given the contours of gun violence and the racial bias of the criminal justice system, will bring the most aggressive law enforcement to bear on marginalized communities.

Even seemingly innocuous measures like strengthened background checks run the risk of having a disparate impact based on race and class. An AR-15 ban, meanwhile, would require a confiscation campaign to deter the secondary market; we need look no further than the drug war to imagine what kind of racially biased violence that could unleash.

These problems are not intractable, but they require (cliché alert) ?cooler heads to prevail.? Jurisdictions like Chicago, for example, have implemented strict gun control laws but remain ridden with gun violence. A common complaint is that the guns can simply come in through places like Indiana, as if to invite law enforcement authorities in Indiana to target folks going (or returning) to Chicago.

The work on reforming policing has barely begun. There have been local efforts to improve police-community relations, and in November, voters in Washington state will decide on an initiative that would require cops who kill to meet an objective ?good faith? standard to avoid criminal liability. That would replace a standard that requires prosecutors to prove cops acted with malice to assign any criminal liability. And Campaign Zero, an unfortunately much ignored set of policy proposals from some of the activist leaders of Black Lives Matter, offers other solutions at the local, state, and federal levels.

Open, vigorous debate is an important part of the American democratic process, and it ought to be welcomed, even in its polarized form, and even when it concerns our most cherished principles. But it requires us, also, to resist the urge to ?do something? policy-wise merely to soothe ourselves, and to understand how such emotional manipulation has far reaching, and disastrous consequences, on all our rights.

About the author: Ed Krayewski
Ed Krayewski is an associate editor at Reason, teaches journalism at Seton Hall in South Orange, New Jersey, and creates comics with his father. Follow him on Twitter @edkrayewski
View More Articles