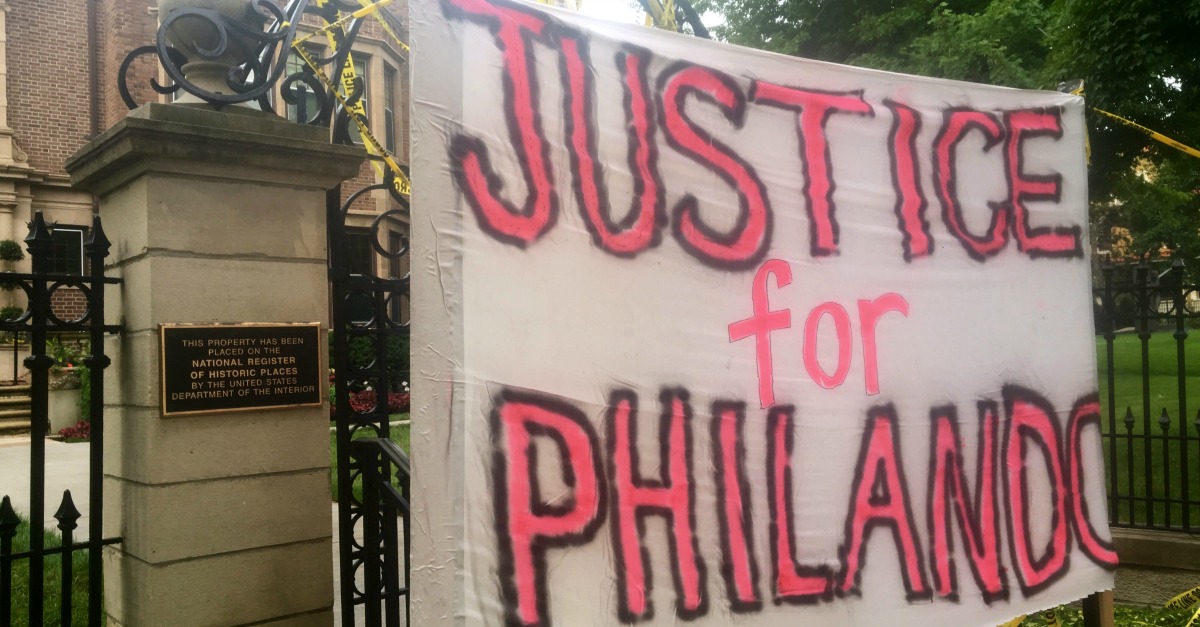 AP Photo/Jeff Baenen
A sign is hung outside the Minnesota Governor's Residence as about 200 people gathered in St. Paul, Thursday, July 7, 2016, protesting the fatal shooting of a man by a suburban police officer. Philando Castile was shot in a car Wednesday night in the largely middle-class St. Paul suburb of Falcon Heights. Police have said the incident began when an officer initiated a traffic stop in suburban Falcon Heights but have not further explained what led to the shooting. (AP Photo/Jeff Baenen)

A little over a year ago, a black Minnesota motorist named Philando Castile was pulled over by a police officer named Jeronimo Yanez while driving with a broken taillight.

You know what happened next: Castile, a lawful gun owner with a concealed carry license, politely informed Yanez he was carrying his firearm. Within moments, he was dead, shot in front of his girlfriend and her young daughter in the back seat. Yanez was acquitted on all charges; did not have to contribute to the bereaved family’s civil settlement; and was just awarded a $48,000 severance deal as part of losing his position on the police force.

You might have thought the National Rifle Association, the nation’s preeminent Second Amendment advocacy group, would be all over this story.

Castile was a beloved elementary school cafeteria manager. He didn’t have a criminal record, and he never acted violently toward Yanez. During the traffic stop, he did everything right, speaking calmly and respectfully and doing his best to comply with Yanez’s panicked and conflicting orders. And especially since the dashcam footage of the traffic stop was released, it is very difficult not to think Castile was killed at least in part because the cops weren’t comfortable with his decision to exercise his constitutional right to bear arms.

Where is the NRA, chomping on the bit to protect Philando Castile's absolute right to have his weapon?

You would have thought wrong.

After much public uproar last year, the NRA made a very carefully crafted effort to say a whole lot of nothing:

The reports from #Minnesota are troubling and must be thoroughly investigated. #2A #NRA pic.twitter.com/Z7wEQNBs0y

Yesterday, the “more to say” was finally said by NRA representative Dana Loesch during a CNN interview in which she clarified she was speaking on the organization’s behalf.

I don’t agree with every single decision that comes out from courtrooms of America. There are a lot of variables in this particular case, and there were a lot of things that I wish would have been done differently. Do I believe that Philando Castile deserved to lose his life over his [traffic] stop? I absolutely do not. I also think that this is why we have things like NRA Carry Guard, not only to reach out to the citizens to go over what to do during stops like this, but also to work with law enforcement so that they understand what citizens are experiencing when they go through stops like this.

The thing is, Castile did know “what to do during stops like this.” He did everything as well as could reasonably be expected, and he still died.

“That is a common refrain from Yanez’s defenders, who say Castile, after disclosing that he had a concealed weapon, should have immediately placed his hands on the dashboard or steering wheel and awaited further instructions from Yanez,” Jacob Sullum notes at Reason. “But Yanez never asked Castile to do that. Nor did he tell Castile to stop moving or to keep his hands in plain sight. He did not even ask Castile where the gun was. Instead he told Castile not to pull the gun out, and Castile assured him that he wasn’t. All the evidence indicates that Castile thought he was doing what Yanez wanted by retrieving his driver’s license.”

But the bigger issue than the content of this rather lukewarm statement on Castile is why it took so long to happen in the first place. Why wasn’t the NRA all over this?

The obvious explanation is the NRA’s defense of Second Amendment rights takes a back seat to its deference to cops, as libertarian journalist Radley Balko has argued:

Asked for years why the NRA hasn't spoken out against the rise in "dynamic entry" police raids, which put legal gun owners at risk. /1

NRA has shown zero interest. Hasn't stuck up for people who pulled guns on raiding cops after mistaking them for intruders. /3

So yeah. When you're bashing BLM, protesters, but look away when cops kill law-abiding gun owners, I question your gun rights priorities. /4

This is telling and troubling coming from a self-proclaimed small government advocacy group. How meaningful is any defense of constitutional rights if it grows tepid when challenged by police? Isn’t defending these individual rights against encroachments of the state, which very much includes cops, the whole point here?

And the most ridiculous part is that so many of the NRA’s natural constituents totally get this, and they also get what the NRA’s lacking response communicates about race and equality before the law. I’ll let conservative blogger Jazz Shaw take it from here:

[The NRA should] speak up on behalf of the rights of all law abiding gun owners. The group has developed too much of a reputation as an organization populated by old white guys. But we don’t want the NRA to be just for old white guys. It needs to represent everyone who supports and defends the Second Amendment and stays on the right side of the law. This is much the same as many other elements of conservative philosophy which are all too often viewed as “white issues” when they should be properly treated as issues which affect and benefit everyone equally.