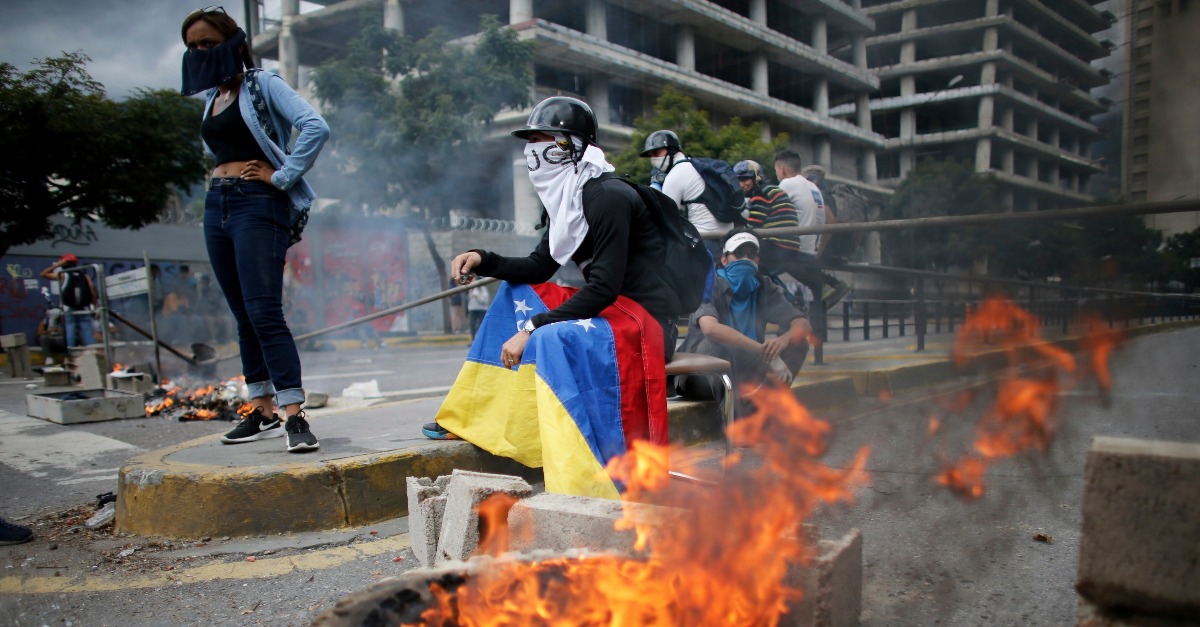 AP Photo/Ariana Cubillos
Masked anti-government demonstrators stend to a burning barricade during a protest against the installation of a constitutional assembly in Caracas, Venezuela, Friday, Aug. 4, 2017. Defying criticism from Washington to the Vatican, Venezuela's ruling party on Friday installed a new super assembly that supporters promise will pacify the country and critics fear will be a tool for imposing dictatorship. (AP Photo/Ariana Cubillos)

Nowhere have the left’s pathologies over Venezuela been captured better than in a recent letter sent to The Guardian by one Peter McKenna.

McKenna, an apparent turgid bore, begins thusly: “While Venezuela?s rightwing opposition boycotts elections and calls for a military coup or foreign invasion, we are to understand that they are in fact champions of democracy.” Never mind that the opposition is hardly right-wing ? two of its parties are members of Socialist International ? and that the election they boycotted, called by president Nicolás Maduro to eclipse them with a constituent assembly that will shore up his power, has been dismissed by the civilized world as tainted. McKenna is too mesmerized by the new assembly’s “members from indigenous and other minority groups” who are “likely to disturb the U.S. and its allies, who believe such people do not belong in legislative palaces.” Ho ho ho.

It’s all there: the prioritization of smugness over reason, the siphoning of complex reality into class-based caricatures, the anti-Americanism. And McKenna is hardly alone. Ken Livingstone, the former mayor of London, has opined that Venezuela is in crisis because Hugo Chavez failed to execute all the country’s oligarchs when he seized power. Here in the United States, our A-team of useful idiots, starring Michael Moore and Sean Penn, has been curiously silent since the tumult began; more common have been diversions away from the real cause of Venezuela’s failures. A lengthy New York Times essay from April pinned the chaos in Caracas on Donald Trump-style populism.

Other culprits abound. Venezuela is said to be teetering because it’s too protectionist, too reliant on its oil industry, too corrupt, too incompetent in filtering down the economic benefits to its people, too authoritarian. All of that is true and precisely the point: these are symptoms of socialism. Solipsistic and drunk on ideology, the government drives out foreign investment; unchallenged by competition, it grows venal and slothful; capable of preserving its monopoly through force, it does just that. Venezuela stayed upright a bit longer than other socialist nations thanks to booming oil revenues, but eventually prices plunged, and the jackboot descended. Its oil industry has been opaque and mired in corruption for years.

Even Venezuela’s relative economic success throughout the aughts, hailed by leftists as an example of functional socialism, is based on a deception. While Hugo Chavez railed against the United States and harassed private energy companies, his government was quietly exporting hundreds of millions of barrels of oil to America, annually placing Venezuela on the list of our top oil suppliers. Chavismo couldn’t have existed without the gringo empire to the north. Even more ironic, Venezuela’s crisis is now so acute that it’s importing American oil, too, mixing its heavy product with our lighter crude. The reason is distinctly capitalist: “It’s just cheaper to bring a tanker of light crude from the U.S. Gulf than to ship it from West Africa or North Africa,” Nilofar Saidi, an oil market analyst at ClipperData, told CNN.

RELATED: Venezuela?s socialist government is pretending to save Christmas by stealing toys and arresting toymakers

Thus fades the socialist idyll ? whose brimming prisons ensured it was never really a socialist idyll in the first place ? leaving behind only a state of violence that’s bordering on civil war. The military is fracturing, with some soldiers inveighing against Maduro’s ?murderous tyranny,? while others remain loyal. The United Nations has accused the regime of rounding up protesters and using excessive force; at least 120 people have been killed in street violence, and thousands have been detained. Maduro, an uncharismatic former bus driver, is now faced with the prospect of losing the Chavismo socialism that’s his ideological inheritance. If he was willing to elect an assembly to alter the Venezuelan constitution in order to avoid that, who’s to say he wouldn’t go to war?

“I think you’ll find the only difference between the rich and other people is that the rich have more money.” So said Mary Colum to Ernest Hemingway, and while she was oversimplifying a bit, certainly the rich are not the alien caste imagined by socialist demagogues, causing all a nation’s problems and scurrying away with all the resources needed to solve them. We have paid a lot for this delusion, in blood, in treasure, in the brain dribblings of Peter McKenna from Liverpool. Unfortunately the bill in Venezuela is just now coming due.