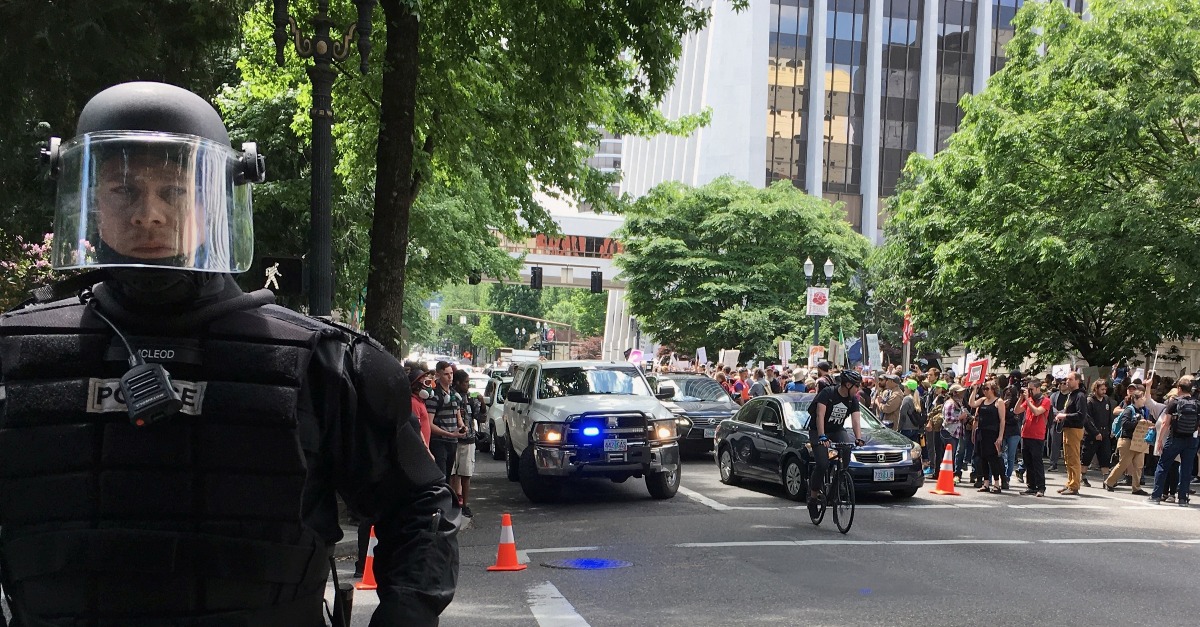 Peter Beinart has a compelling piece up at The Atlantic that reports on something disturbing: the city of Portland has become a hotbed of political violence between fringe left-wing and right-wing groups. It’s a reality incongruous with the city’s reputation, one of quintuple imperial IPAs, cars that run on Whole Foods receipts and tolerance. Yet toleration of the other side has been in short supply recently, as the illiberal left and alt-right have squared off in the streets.

The two sides have been reacting to and playing off each other, amassing a record of violence unseen since the 1960s. Following Trump’s election, far-left protesters rioted in Portland, racking up an estimated million dollars worth of damage. The alt-right began to organize too, including at a rally in late April attended by a man named Jeremy Christian who gave Hitler salutes to passersby; he would later board a train and kill two with a knife after he was blocked from abusing a pair of Muslims. Additional demonstrations followed Christian’s killings along with additional chaos, as black-masked left-wing ‘antifa’ (short for ‘antifascist’) militants showed up to clash with pro-Trump protesters.

RELATED: The alt-right exists; so does the alt-left — We need to reject both

Loath though they’d be to admit it, the two sides are mirror images of each other. Both refuse to renounce violence as a method of political action, with antifa explicitly promoting sabotage and alt-right groups calling on militias like the Oathkeepers to patrol their events and declaring “an open season on antifa.” Both have been animated by the run-and-gun politics of the Trump era. Both have found a fitting backdrop in Oregon, with that state’s surprisingly deep history of racism (its original constitution banned blacks from living there) and consequent pushback. Both have been fueling each other, culminating in a rally on Sunday that quickly devolved into a bloody brawl, as signs decrying racism and images of Pepe the Frog waved overhead.

There’s an incipient totalitarianism at work here, especially in antifa groups, which openly seek to obstruct Republicans from organizing. The violence in Portland is what happens when the center gives way — not Washington’s insipid conception of the ‘establishment center,’ which taken in toto is an extremist ideology all its own, but what might be termed the ‘libertarian center,’ the center that contends you have a right to assemble unthreatened by coercion, the center that might disapprove of what you say but will defend to the death your right to say it. This center is the ballast of our politics. It upholds — much though I hate this term — the marketplace of ideas that allows even extremists to make their contributions. When it crumbles, those unencumbered by such deference to their opponents rush in, and the result is Portland, bleeding Portland.

RELATED: Get the hell out of the streets and stop lighting stuff on fire

Beinart compares this political dichotomy to the 1920s and 1930s “when militant leftists battled fascists in the streets of Germany, Italy and Spain.” It was another time when the center failed to hold, and the best example is probably Spain. From 1918 onward, the Spanish left became radicalized by Bolshevik influence, a series of violent strikes in the mining north and Andalucian south and an increasingly anti-clerical bent that saw hundreds of churches torched. The right grew more extreme in response, tilting toward fascism and organizing violent Falangist gangs. The result was the Spanish Civil War, a left-versus-right street fight blown to national proportions that killed more than 600,000 and left Spain under the reign of General Franco for the next 36 years.

The good news is that Portland isn’t about to immolate itself. Though the antifa and alt-right crowds draw the most attention, it’s a third group, mainline liberals peacefully protesting Trump, who number the most, as the Huffington Post reports. Likewise, many Trump supporters in Portland have expressed dismay at their white supremacist fellow travelers. America will survive this era of upheaval; its people will channel their political anxieties into the usual methods of organizing and voting rather than skull-cracking. But Portland stands as an example of what happens when the left and right surrender to their most authoritarian temptations, when the crucial libertarian assumptions that must undergird both fall away. The result is rarely productive, often painful.