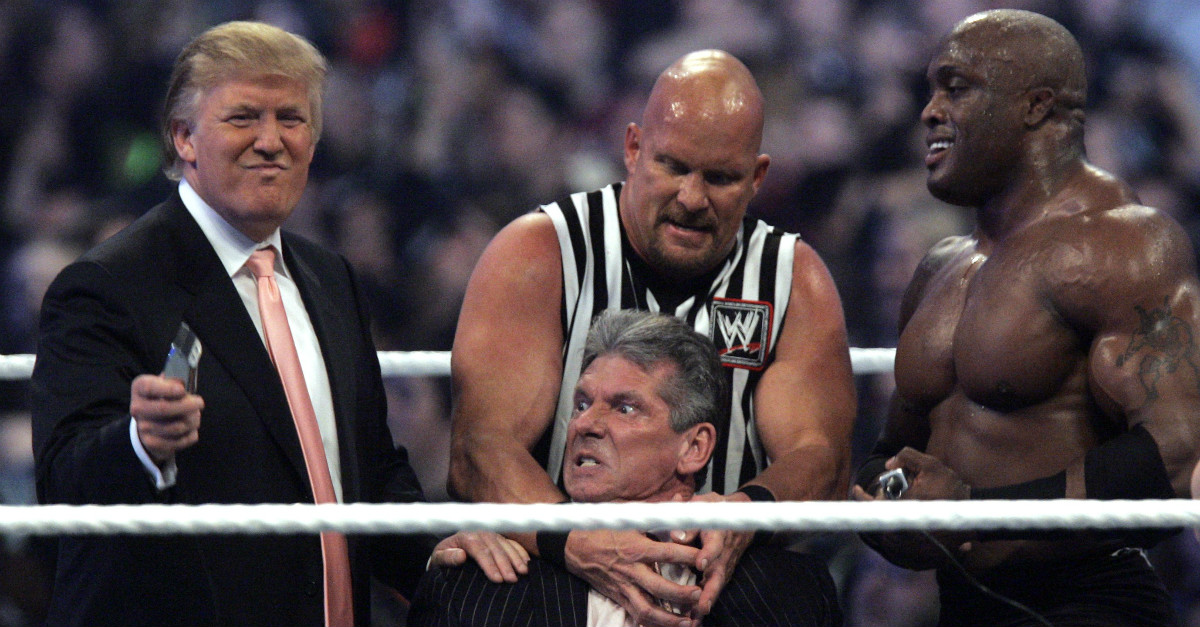 I have been a pro wrestling fan my entire life, a passion I apparently share with CNN’s Chris Cillizza who admitted Sunday, “I love pro wrestling — always have, always will.”

Cillizza penned an interesting piece in the wake of Donald Trump tweeting on Sunday a video of himself appearing to beat up CNN, compliments of a photoshopped clip of Trump’s 2007 appearance at World Wrestling Entertainment’s premier event WrestleMania.

Cillizza says that after watching this stuff for decades, he believes the best way to understand the president is by understanding the dynamics of pro wrestling.

?At the heart of pro wrestling sits this basic fact: It is fake. It is a scripted television show,? writes Cillizza. ?But it is, at heart, a soap opera.?

Cillizza describes how ?faces? (good guys) like Dwayne ?The Rock? Johnson and John Cena and ?heels? (bad guys) like greedy billionaire ?Mr. (Vince) McMahon? are just playing characters that fans buy into. ?This basic divide between fake and real is what Trump capitalizes on, too,? Cillizza concludes.

But then Cillizza gets something really wrong. ?Lots and lots of people who go to the shows, who buy the t-shirts and who subscribe to the WWE Network believe that this is all real,? he claims.

As an ?80s kid, I remember when a sizable portion of the wrestling audience believed it was legit, which led to everything from riots (which have actually still happened in the modern era) to fans stabbing heel wrestlers. But post-internet, fans have been able to learn the intimate details of what happens behind the scenes. Today, you will find very few wrestling fans, at least in most of the United States and developed nations, who believe it is real.

Today the people who act most like the wrestling fans of old are those who absolutely love or loathe Donald Trump.

It?s hard to recall a time in recent political memory in which Republicans emotionally invested in the president and those who deeply despise Trump have displayed their passions with the ferocity that they do right now. It has become intensely personal for so many. Too many.

There is no gray area. You?re either with Trump, or you?re against him?and that?s all some people need to know about you. It?s how they judge you.

This is not logical. But it?s also exactly how pro wrestling has always operated.

The characters?whether? Stone Cold? Steve Austin or President Donald Trump?say things that they know will delight or enrage different parts of their audience. Wrestling fans get it. Cilizza makes the case that this is exactly what Trump is doing too. That he?s working his audience.

Trump uber-fans might like that he?s pro Second Amendment or that he slams ?fake news,? but they more so identify with his billionaire swagger, blue-collar language and the fact that the left abhors him. Trump haters might be genuinely be concerned about the president?s lack of interest in climate change or his plans for health care (positions a Republican President Mitt Romney or Marco Rubio might have also had), but it is Trump?s persona?the duck face, the orange tan, the pomposity, the tweeting, the nerve of this guy!?that really sets them off.

And it?s not real?or at least not to the cartoonish degree that people on both side of the Trump divide build it up to be in their minds.

RELATED: If you won?t leave your partisan bubble, you care more about making yourself feel good than political change

How many conservatives genuinely believed Barack Obama was a secret-socialist-radical-Muslim-Kenyan terrorist? This was always absurd, but his hardcore haters believed it and some made money off of it. How many liberals viewed Obama?who continued many of the Republican policies of his predecessor the left had once vigorously opposed?as a progressive messiah? That was always a stretch, but it?s what his admirers wanted to believe. It was suspension of disbelief. It made them feel good.

That?s what wrestling is.

Polarizing partisanship has peaked even worse with Trump. Chris Cillizza is right that President Trump approaches politics like pro wrestling, but the president?s fans and foes might be even worse.