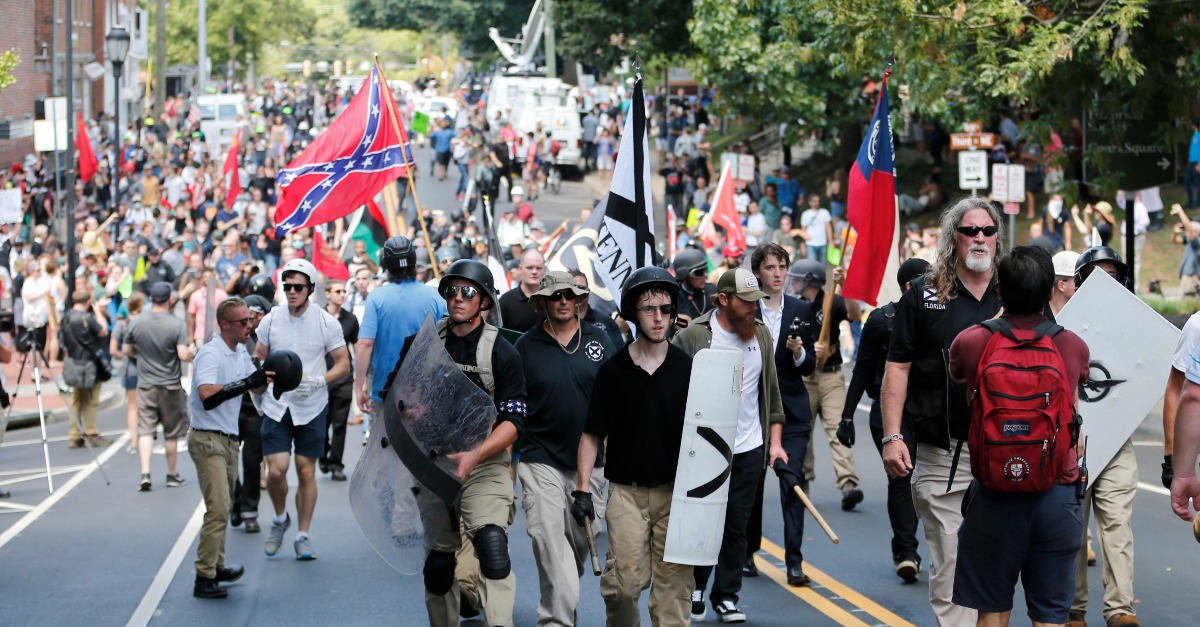 I was at Glenn Beck’s rally on the National Mall back in 2010 — as an observer, though I was sympathetic to the demonstrators — when a small group of scruffy leftists meandered by, holding pejorative signs and aiming to enrage. There was a moment of tension, then one Tea Partier yelled: “Don’t fall for it!” Another advised: “Let’s sing ‘Amazing Grace’ instead.” And they did just that, at least a dozen of them, out of tune but united in peace, leaving the provocateurs to slink away unsatisfied.

That was seven years ago — an eternity in our manic politics. Peaceful hymns were not the approach taken by the protesters who descended on Charlottesville last weekend. Their Million Morons March or whatever it was called began on Friday, with hundreds of white supremacists carrying Tiki Torches — the Aryan ritual of the backyard barbecue must be preserved! — onto the University of Virginia campus. It ended Saturday with Governor Terry McAuliffe calling a state of emergency and a car plowing into a crowd of counter-protesters, killing one and injuring many, an act of domestic terrorism mimicking ISIS jihadists. This is what happens now in our pre-Spanish Civil War political climate. The street violence I wrote about last week isn’t limited to Portland anymore.

Fortunately, vile skinheads hold very little political power. We cuckservative race traitors vastly outnumber them, and we damned well shouldn’t let them forget it. But we also can’t ignore their outsize ambitions. The bigots and Nazis who turned a college town into bedlam mean to displace the conservative movement and rebuild the right in their own hideous image — hence the real name of their rally: “Unite the Right.” It was Donald Trump who inspired them, and they view his moment as their own. “Before Trump, our identity ideas, national ideas, they had no place to go,” prominent white supremacist Richard Spencer told the Los Angeles Times last year. Trump’s election, propelled by a host of grievances, most of which had nothing to do with race, was viewed by them as validation, a sign that they were winning and that the more mainstream right was waning.

The march was intended to flex their newfound political muscle. As the mayhem that ensued demonstrates, this is a very real threat, one that’s more mobilized and emboldened than it’s been in decades. Theirs is an ideology for adolescents and trolls — and that’s exactly whom they’ve been targeting, often with success. One study by George Washington University found that white nationalist groups have seen their follower counts increase exponentially since 2014 (the most relevant graph can be found on page 4). The Anti-Defamation League, meanwhile, has reported “an unprecedented outreach effort” by white supremacists “to attract and recruit students on American college campuses.” Expect their recruitment to only increase following the media attention they received over the weekend.

The risk isn’t so much that an entire generation is about to swoon into the arms of neo-Nazis; it’s more that young people will be seduced by the alt-right, which now acts as a halfway house for white supremacy, legitimizing some of its ideas and placing its adherents closer to it on the ideological spectrum than they should ever go. As the political science professor George Hawley said in November interview, “[T]he core of the alt-right is white nationalism — or, at least, white identity politics.” It’s an ideology that’s visceral and cathartic, which how people today want their political action. With the right fractured and anti-liberalism currently more popular than actual conservatism, don’t think this garbage doesn’t have real allure, especially for young white males weary of being harangued by the politically correct left.

Conservatives must acknowledge that this is a direct threat to their corner of American politics and peacefully expunge it. It doesn’t matter that similar violence by left-wing antifa protesters in Portland has been relatively ignored — if your main takeaway from the carnage in Charlottesville is that there’s a double standard in the media, then you’re doing it wrong.

RELATED: The alt-right will soon end its love affair with Donald Trump

We’ve been slow to confront this enemy — myself included — for three reasons. The first is the much-addressed “boy who cried wolf” problem. Liberals have unjustly accused so many of being racist over the years that acknowledging a real bigoted menace in our midst isn’t something we want to do. The second reason is that alt-right positions overlap with some perfectly valid critiques — of the left, identity politics, political correctness, intersectionality gibberish and the ludicrousness of modern academia — that conservatives have long agreed with.

The third reason is that the Republican president hasn’t blazed a trail. Donald Trump should go to Charlottesville, stand in front of the statue of Thomas Jefferson and use his own freedom of speech pioneered by the Sage of Monticello to make a statement that’s as galvanizing as this moment was shameful. He ought to dish out some Trumpian vitriol — a dialect the racists understand — condemn the alt-right and rob them of their daddy in the White House.

American politics is an expansive pantheon, but it has no room for bigots and Nazis. We on the right should make it unambiguous that we won’t tolerate them.