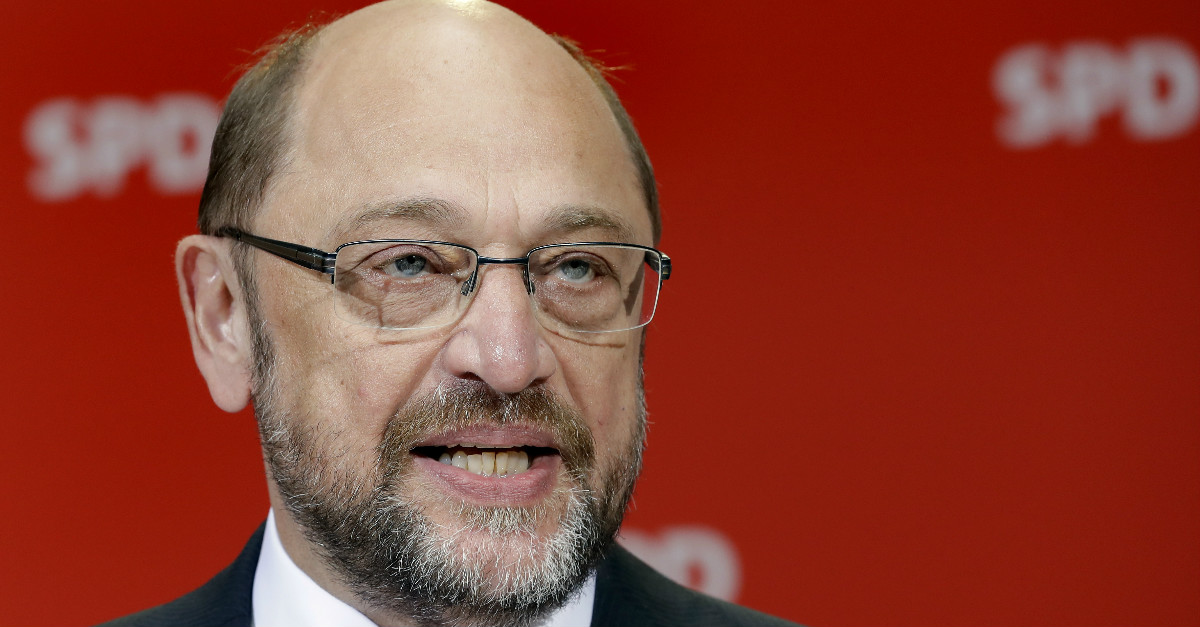 AP Photo/Michael Sohn
Martin Schulz, chairman of the German Social Democratic Party (SPD) and Chancellor candidate for the upcoming general elections addresses the media after first projections for the state elections in the German state of North Rhine-Westphalia were announced at the party's headquarters in Berlin, Germany, Sunday, May 14, 2017. (AP Photo/Michael Sohn)

In September, Germans will head to the polls to elect a new parliament. Incumbent Chancellor Angela Merkel’s biggest challenger is the leader of the Social Democratic Party (SPD) Martin Schulz, who is the former chairman of the European Union Parliament. Schulz is known for his eccentric rants and aggressive tone, especially when it comes to those who are skeptical of the EU.

During a recent rally, Schulz said the following:

Yes, there is an alternative for everything, including for Europe [meaning: European Union]. But the alternative to the Europe that we have today is, we know that already: it’s the Europe of the last century! That of murder, manslaughter, the fantasy of big and powerful empires, the reigns of autocracy. That is not my Europe, that is not the social democrat Europe.

This is not the first time that Schulz has made an objectionable statement. After the Republic of Ireland voted against the 2005 EU constitution in a referendum, Schulz said that it had “opened the door to fascism.” He also called Dutch MEP Daniël van der Stoep a fascist for asking the president of the EU Commission to publish details of his expenses accounts in 2010.

Outside of a tendency to use profanities in parliament buildings, Schulz has little to offer politically. His years spent in the European Parliament left little mark. But his remarks encapsulate an all-too-common argument among those who support the EU. French President Emmanuel Macron has stated that leaving the European Union would lead to the bankruptcy of France. Former British prime minister David Cameron, voicing his support for remaining in the EU before the Brexit referendum, said that leaving the union could lead to another war.

This is what it means to be a classic EU supporter in modern European politics: throwing around World War II references and branding all eurosceptics as xenophobes and extreme nationalists.

RELATED: Theresa May now needs to deliver on Brexit or leave

Few of Schulz’s claims are true. The question of whether the European Union has maintained peace in Europe is easy to answer: no, it hasn’t. This is not only reflective of the fact that the EU has only existed in its current form since the Maastricht Treaty of 1992; it’s also to note that there hasn’t actually been peace.

While Western Europe has remained mostly peaceful, the rest of the continent has seen a total of 41 armed conflicts since the end of World War II. Most of these were either restricted to a small area or occurred within a single state: for instance, the Greek Civil War, the Romanian Revolution, the Border campaign of the IRA in Ireland, the Albanian Civil War, the Years of Lead in Italy, and the Basque conflict between the ETA and Spain. There were also actual interstate military conflicts, among them the Ten-Day War between Slovenia and Yugoslavia, the Turkish invasion of Cyprus, the Transnistrian War, the Cod Wars, the Kosovo War, and the war in Bosnia.

But even if we are merely looking for the reason for peace in Western Europe, the answer isn’t a gigantic political structure created in the 1990s. It’s the free trade that’s been endorsed by Germany and France since the 1950s.

The Schuman Plan, or the Schuman Declaration, was a 1950 speech by the French foreign minister Robert Schuman in which he suggested the creation of the European Community for Coal and Steel, an authority instituted to centralize trade regulations with the precise intention of preventing another war between Germany and France. His theory was that the mutual interest of both nations trading would prevent them from going to war in the future. Schuman did not need a common agricultural policy or EU defense budget for his vision, which proved to be remarkably prescient and successful.

So no, Herr Schulz, not only wouldn’t the end of the EU lead to death and destruction in Europe, but eurosceptics also aren’t advocating for another war. Are there questionable people who oppose the EU? Most certainly. However, putting those who favor small government, free markets, and localism into the same Clintonian basket of deplorables will get neither you nor the EU any sympathy.