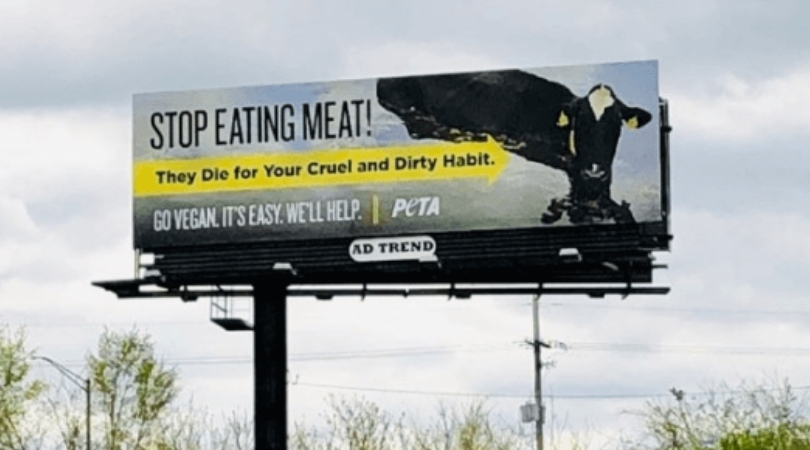 Uh, what in the world is PETA smoking? Seriously. The organization has done it again, this time putting up new billboards in South Kansas City, that show a cow in deep water with the words, “Stop Eating Meat! They Die for Your Cruel and Dirty Habit.” Apparently, this pertains to the recent floodings due to climate change, and People for the Ethical Treatment of Animals thinks the world is suffering all these natural disasters because we eat meat.

The PETA billboards are meant to pay homage to farm animals that were killed during the historic flooding across the Midwest in March. PETA spokesperson, Amber Canavan, said the animals were likely terrified while being swept away by flood water just like they usually do when they take “a trip” to the slaughterhouse.

I didn’t realize eating was a dirty habit.. But fuck it. What’s another one in my collection? https://t.co/GUDPPBdhbX

According to PETA, these billboards show a purpose to encourage consumers to go vegan, practice to eliminate meat, dairy products, and all other food that come from animals. The billboards also urge people to switch to plant-based agriculture.

As expected, the Missouri Cattlemen’s Association, along with several locals, called the billboard heartless and distasteful. Which I have to agree with. The organization executive vice president stated that farm and ranch families are “at the mercy of the weather” and the fact is that natural disasters are often devastating, but unpredicted.

“Farm and ranch families were seen working frantically in Nebraska, Missouri, and other states to move their livestock to higher ground before and during the extreme flooding. Facebook photos of baby calves living in ranchers’ basements were commonplace. The Nebraska National Guard air dropped bales of hay to stranded livestock. Farm and ranch families love their animals. It’s their life. When disaster strikes, they put it all on the line to save their livestock. Neighbors help neighbors. We stand tall and have zero tolerance for the hate and ignorance of PETA.”

Honestly, it sounds like PETA is trying to make a natural disaster into a political agenda, and people are not having it. I mean, a flood wasn’t caused because someone wanted it to, it was because of natural causes and doesn’t have anything to do with people eating meat or treating their cattle poorly, which one should never do. Still, PETA plans to put more billboard up along Interstate 70 near Truman Road and another billboard in St. Louis by the end of the month.

I get it PETA, you’re trying to convince people, really really hard to lay off the meat, but this is the wrong way to go about it. I get you have the right to spread out your message any way you want, and we are all for animal rights, but this is crossing a line. Let us live.

It’s definitely out of context.