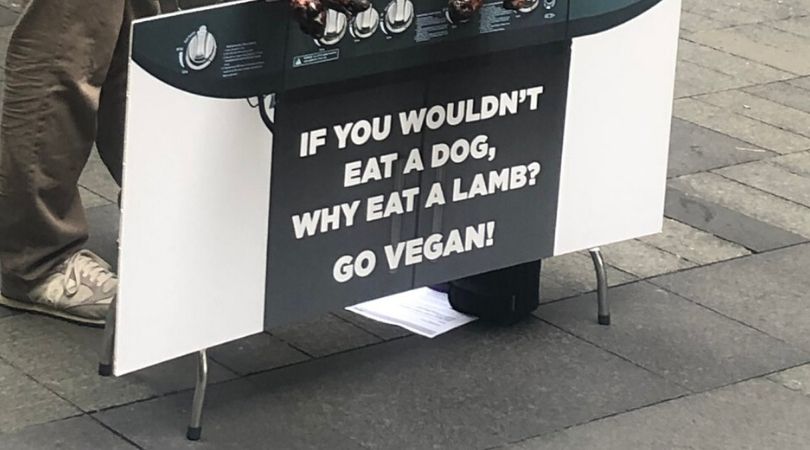 PETA has sparked outrage worldwide, including with supporters of the organization, after the animal rights group decided to barbecue a fake dog at an Australian shopping center. The dog was laid across the top of the barbecue pit with fake food, such as corn on the cob, mushrooms, peppers, and onions, while the “chef” pretended to grill them and prepare the animal as a meal.

Demonstrators from the group set up their station at the Pitt Street Mall in Sydney, to hold a protest which has been branded “disgusting” and “sick” by shoppers who saw it.  Several customers stated the organization stooped to “a new low” claiming the sight was upsetting to see, especially to young children walking around the area.

Their main motive? The stunt was designed to encourage people to embrace veganism, of course, but PETA stated they simply “wanted to encourage” people to reconsider what to cook for their upcoming Australia Day Feast. Families usually come together to celebrate the Official National Day on January 26th. The canine was probed on the barbecue with a banner on top stating, “If you wouldn’t eat a dog, why eat a lamb? Go Vegan!”

PETA defend the fake barbecue by releasing a statement,

“As humans, we instinctively feel compassion and empathy for animals, but we’re taught that it’s OK to enslave and eat some of them, without a second thought as to who they are as individuals. While humans typically consider dogs to be loyal companions, with personalities of their own, the sheep, chickens, pigs, and cows who are cut up into bite-sized pieces for human consumption are just as feeling and loving.”

That supposed protest in Sydney is more inhumane than any slaughtering of animals. Keep them out of public places. It should be classed as public nuisance! Kids around? That is further reason to stop this! Exposing them to this??? Cruel.

I don’t believe in animal cruelty in anyway I believe all animals should be treated with kindness . However I have no respect for #PETA they really went to far with the Sydney dog bbq stunt !! It was beyond sick and twisted and damaging towards the children who saw it !

This isn’t the first time the animal rights group has been criticized for trying to “inspire” others to stop eating meat. Last year, PETA sent a letter to Wool Parish Council in Dorset, to change the name of the village to “Vegan Wool”. The organization believed it would not only impact locals to seek out cruelty-free clothing but show compassion for sheep who are torn apart from their wool. One councilor stated they thought the organization was playing a late April Fools joke, saying their petition was unreasonable.

Safe to say, this time around people didn’t take their stunt too kindly either, calling the organization insensitive and ridiculous. Users took to social media to vent at PETA for exposing people to the horrific scene, especially on a school holiday outing and in a very public place.

PETA, oh PETA. What are we going to do with you?

Editors Note: This article was originally published on April 7, 2019.

Watch: Watson the Golden Retriever May Have Been Hit by a Car But His Spirit Is Intact