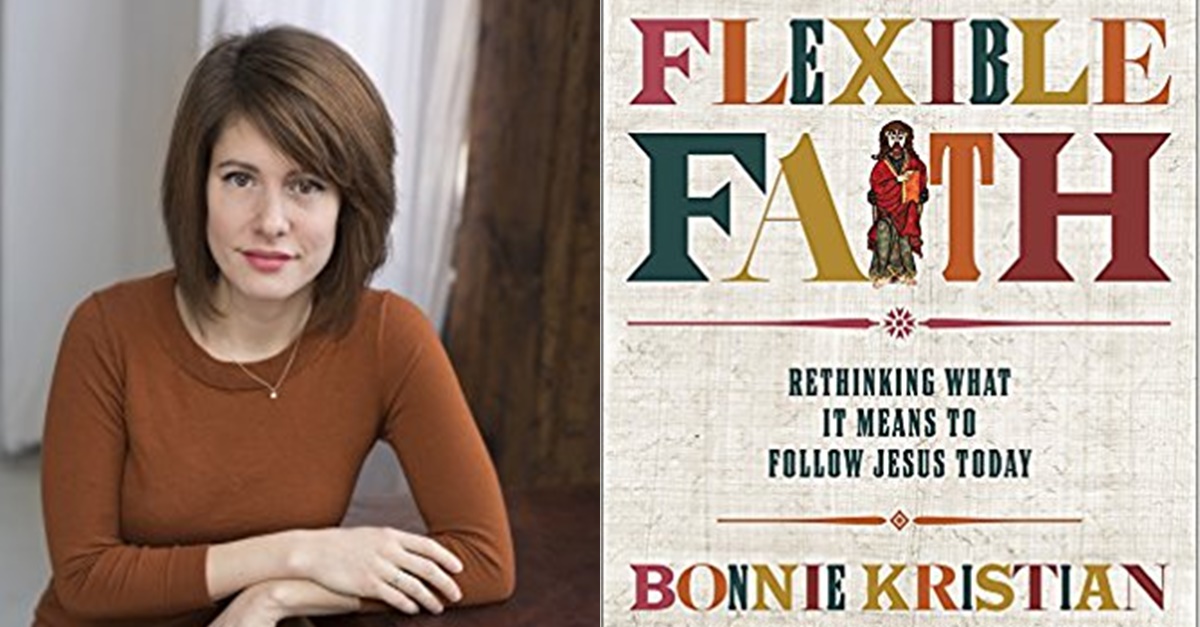 Bonnie Kristian has spent the past several years writing about theology and politics for multiple publications, including Rare, The Week, The Hill, Time Magazine, CNN, Relevant Magazine, Politico, The Hill, and The American Conservative, but in her first full-length book, ?A Flexible Faith: Rethinking What It Means to Follow Jesus Today,? she delves into some of the most controversial topics faced by Christians both today and throughout history.

“A Flexible Faith” leads readers through the many facets, rituals, doctrines, denominations, and hotly debated issues many Christians will encounter on their faith journey.

In the book, Kristian attempts to give a broad overview of issues such as salvation, hell, the tribulation and gay marriage, just to name a few, only rarely injecting her own opinion into the fray. She also interviews multiple people from faith backgrounds that are considered outside the mainstream and gives them a chance to explain their theology and view of Christianity. She also points readers to multiple resources to dig deeper into the important topics she covers in the book.

I discussed the book at length with Kristian and picked her brain on the how and why behind the book, and in the process, gained some valuable insight into the reasons why she thinks this book is necessary.

What do you hope people who read “A Flexible Faith” come away with after reading it?

I think it depends on who the reader is. If it?s someone who?s maybe new to the faith or perhaps they?re in a season of questioning or deconstructing the faith ? for them, my hope would be that they come away with an awareness that Christianity is not just the one version that they?ve encountered, and that there are other faithful Christians who share that core commitment to Jesus and the basic dogmas of the faith, such as the Apostles’ Creed, but who do have very different opinions on sort of lesser doctrinal questions, and that those opinions are not heretical. You may think they?re wrong, or you may not, and maybe you?ll find a new church tradition context in which to worship and to be a community.

If, however, you?re not in that season of deconstruction or questioning as a reader, then my hope would be that it would be an introduction to distant relatives in the faith. I think we lose something as Christians, even if we?re perfectly happy in our context, I think we lose something by not knowing what other Christians in different traditions believe – both because we can sometimes learn something from them, even if we don?t end up at the exact same viewpoint, but also because we can work together in ways to serve outside the church and share the gospel.

Is there a particular audience you hoped to reach with your book?

There are three audiences I had in mind. The first one, and the main one that I was thinking about as I was writing, were Christians who are in a season of doubt or questioning or increasing discomfort with the theological tradition that they?re most familiar with. ? If you?ve gone through that experience and now you?re at a point of wanting to rebuild, then this book is what I would want to say is ?here?s a guide to get you started on that. Here?s an easy, accessible way to explore what else is out there and that leaving the one tradition that you?re familiar with does not mean that you have to leave the whole church, and maybe there is a tradition that?s a better fit for you.?

The second audience would be people who are people who are good with where they are, that are happy in their tradition, they?re growing in their faith, they?re active in their community, but they do want to know what other Christians in unfamiliar contexts believe and why they?re saying different things while still following Jesus. [I also want to] really introduce people to this big thing that we?re apart of but are often very unfamiliar with except our own little portion of it.

Then the third audience would just be people who maybe are very new to Christianity or are not Christians at all [and] maybe have no background or familiarity with the church. For those people, I tried to write in an accessible enough manner that they would be able to get a good idea of how we are united in spite of the many internal disagreements within the church.

Is there a specific topic that started you off on your journey to writing ?A Flexible Faith??

I would probably say the question of hell. I had discussed that with my husband even before we got married because he had some questions on that, and I had just started reading up on that subject. And, when I started writing, I went back and looked through some emails and found what I had written then was very similar to what I had written on in the hell chapter. That was maybe the first topic that prompted this, but I also attribute some of it to my personal website and blog. I would get questions from readers asking for simple explanations of something about political philosophy or some current event, and I would try to write it up in a very accessible manner so that it could be read quickly. So, that background of thinking how to explain things in a way that people can quickly understand without a huge wealth of background knowledge about the subject was part of the inspiration for this book.

You?ve covered some topics that many Christians struggle with in their faith. Is there one topic that you struggled with addressing more than others?

I would say that there were three chapters that were the most difficult to write and for different reasons. The chapter on how to read and interpret the Bible, whether it?s inerrant or infallible or just inspired by God. That one, I think, was difficult just in terms that it was a huge subject. The chapter on gay marriage was difficult because I wanted to be so careful in my phrasing to not misrepresent different issues because that is an inherently contentious subject for the church these days ? well the past two decades. I think the chapter about choosing a church where I have that brief denominational guide ? for that one I wanted to be super meticulous with my research especially ? not that I wasn?t throughout the book – because it wasn?t talking about a position so much as groups people, and I very much didn?t want to misdescribe people or describe them uncharitably because how terrible would it be to be reading through and see your own denomination and say, ?We?re not like that. That?s not us.? So, for all of them, I think there was a unique set of research challenges just depending on what information is available, what?s my own background on the subject, what?s my own opinion on the subject, how strongly do I feel about it, [and] am I being fair to the positions that I don?t like.

The Bible is so foundational to our beliefs, but many Christians have very little knowledge of how the Bible came about – how the Canon was assembled. How do we educate those in our communities about the origins of scripture, and how do we start those conversations?

One of the resources that I recommend at the end of the chapter on the Bible is a book called ?How to Read the Bible for All Its Worth,? and that?s written at a similar level of accessibility to this book, and I think that?s a great resource to start with in terms of if you want to make the Bible seem more approachable and readable for people who aren?t familiar with it.

How do we approach a friend or someone in our community of faith who is possibly ?inflexible? in their theology to persuade them to become more generous in their orthodoxy?

A model for thinking about theology and disagreement in the church which I’ve found really helpful comes from Greg Boyd, the theologian who wrote the foreword to ?A Flexible Faith.? So, he advises thinking about our faith in terms of concentric circles, like the Target logo. In the very center is Jesus, God incarnate. Now, this center isn’t our beliefs about Jesus but the person of Jesus himself. The next circle contains a very limited set of beliefs we can call dogmas. This is the super foundational stuff about who God is and how he relates to us that forms the core of our faith. The Apostles’ Creed is a great encapsulation of dogma-level theology because it tells the basic story of our faith, and all little-O orthodox Christians can sign on to what it says. The next circle is a lot bigger, and that’s what we call doctrine. These are issues that are big enough to divide denominations, like how we should baptize or whether God chooses who to save. The final, biggest circle is for opinions, smaller questions where disagreement can coexist in a single denomination or even congregation.

For every topic where I’m explaining competing theological options in ?A Flexible Faith,? we’re looking at doctrine- and opinion-level issues, never dogma, and certainly never anything that questions Jesus as the center of our faith. These questions in the book are important, but they’re the sort of thing where if we disagree with someone, we say, “I think you’re wrong,” not “You’re not a Christian.”

The concentric circles approach has been really valuable to me for approaching theological disagreements with a balance of confidence and humility. It makes it easier to assess the stakes, if you will, of any theological disagreement and keep the discussion in perspective. It also helps me remember that the entire Church doesn’t look and think like I do and that I’m missing out on so much if I only talk to and learn from people who share all my exact views.

Thinking about faith with these concentric circles in mind and acknowledging that there is diversity and disagreement within orthodoxy is not about papering over differences or saying there is no truth. It’s about recognizing that faithful followers of Jesus can and do come to different conclusions on these questions, and we need to understand why other Christians disagree with us ? and learn to work together to share the good news and serve our neighbors anyway.

?A Flexible Faith: Rethinking What It Means to Follow Jesus Today? will be released on May 15, 2018, and is available now for preorder.

Author?s Note: This interview has been edited for clarity and conciseness.