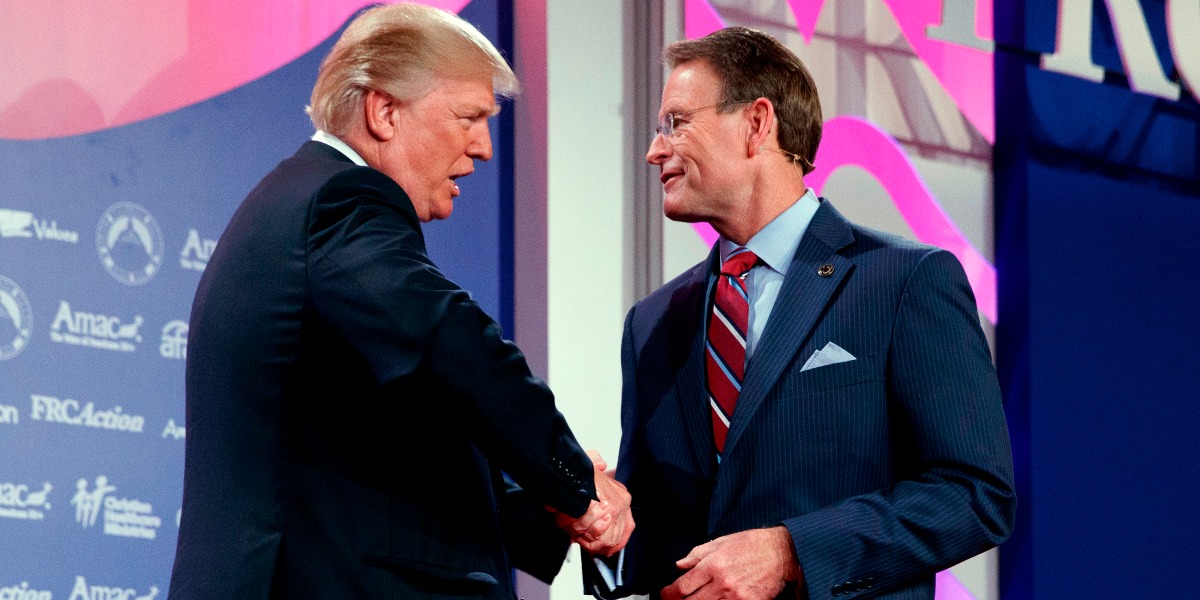 Some of these stories may not be true — there is no way to prove “shithole,” for example, absent the discovery of some heretofore unknown recording — but the broader characterization of Trump as lewd, callous and unethical in his personal and professional life is beyond dispute. He has spent decades in the public eye, flaunting deficiencies of character most would strain to conceal. This is, after all, a man who literally tried to steal a widow’s home to build a casino limo lot.

And yet white evangelicals remain among his staunchest supporters. Their enthusiasm is not quite what it was during the election — then, eight in 10 gave him their vote; now Trump’s support in that demographic is around 60 percent — but it remains well above the national average. This loyalty has been the subject of endless analysis, the latest of which came in the form of a POLITICO interview with Tony Perkins, head of the Family Research Council, a conservative evangelical lobbying group.

“We kind of gave him — ‘All right, you get a mulligan. You get a do-over here,’” Perkins said of “the cursing, the lewdness and the litany of questionable behavior” that has featured prominently in Trump’s public life for decades.

Perkins’ rationale is that Trump’s lack of character is well outweighed by his value as a policy ally, a trade-off Perkins believes to be mutually worthwhile. Trump is “a very transactional president,” he told POLITICO, adding, “And I think in this transaction, he realizes, ‘Hey, these are people I can count on, because they don’t blow with the political winds.’ It’s a developing relationship, but I’ll have to say this: from a policy standpoint, he has delivered more than any other president in my lifetime.”

This is a common rationale among Trump’s court evangelicals. It fails on three counts.

First, it overstates Trump’s policy accomplishments on issues like abortion and religious liberty. He did revive a Reagan-era rule prohibiting the use of federal funds to pay for abortions abroad, but it’s worth noting this is an executive order, not a law, and therefore is subject to the whims of future presidents. He spoke at March for Life this year, and that may be symbolically important, but it is effectively neutral to negative for the pro-life cause.

Likewise, Trump’s first big “religious liberty” executive order, which claimed to make it easier for churches to engage in politics (a goal of theologically debatable value), effected so little meaningful change the ACLU said it had “no discernible policy outcome” and didn’t bother to fight it. This month, Trump’s Department of Health and Human Services debuted its new Conscience and Religious Freedom Division to protect health care workers’ rights of conscience, and that may prove to have more teeth.

By my count, the sum of these accomplishments is small. But perhaps your accounting is more generous. If so, that brings us to the second failing of Perkins’ rationale: It conflates support for a policy with support for a politician.

There is an important difference between giving Trump credit and cooperation where due, on the one hand, and giving him support, on the other. This distinction applies to any elected official: we can work with them productively on a given issue without in any sense identifying with their person or general cause. I can say, “This politician is good on this topic,” without adding, “so he’s my guy.” Liking one thing Trump does is no obligation to ignore or downplay his brazen depravity.

The third failing in Perkins’ eagerness to give Trump a mulligan is the way it ignores the emphasis the Bible places on our words and deeds as an indicator of what is in our hearts. Christians are unquestionably called to forgive, but to say someone’s good deeds outweigh their bad is not forgiveness. It is a moral accounting system utterly strange to Christianity. We cannot thus cancel out our sins, and our ethical values are meaningless if they vary according to how much we like someone’s politics.

I am not questioning the intentions of evangelicals, like Perkins, who back Trump in a sincere effort to stop abortion and protect religious liberty. But I do deny the wisdom of their allegiance to Trump and their minimization of his cruelty and avarice. They may seek good ends, but in the process they have embraced wicked means.