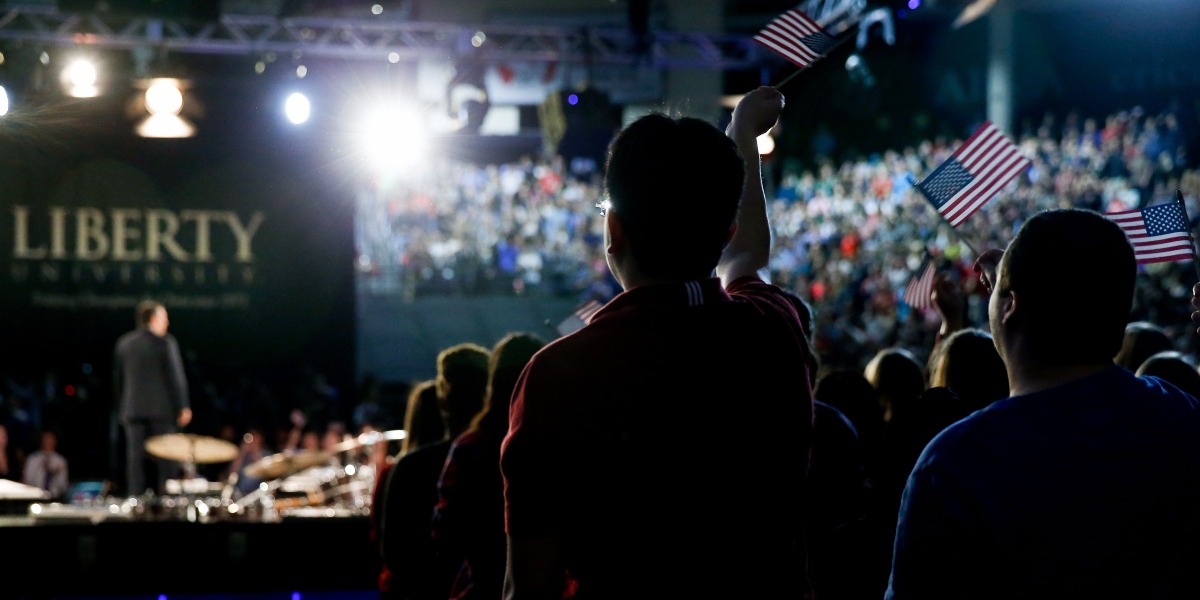 Liberty University is the largest Christian school in the United States, perhaps best known for its legalistic rules for student life and the enthusiasm of its president, Jerry Falwell, Jr., for President Trump. Here’s the school’s lineup of convocation speakers for next week:

Check out these upcoming #LUConvo guests! You can watch all of our guests on Facebook Live at 10:30am! pic.twitter.com/dUwR2TAICS

The two on the right, Steve Strang and David Bossie, aren’t raising many eyebrows. Strang is a writer who founded Charisma Magazine, a source of news and commentary for charismatic Christians, and Bossie is the president of Citizens United, the organization best known for making a movie about Hillary Clinton and its Supreme Court case about election spending law.

Then there are the other three.

First up is Tomi Lahren, the 25-year-old Fox News commentator who specializes in visceral, sometimes dishonest takes on the news of the day, and who has said she doesn’t think it is “entirely a bad thing” to deviate from “values [that] are rooted in the Christian faith.” She is light on substance, heavy on venom, and emblematic of the sort of conservatism more concerned with spiting liberals than advancing good principles. Needless to say, she’s a big Trump fan.

Lahren is also pro-choice, something a local reporter in the Lynchburg area found is a major problem for pro-life Liberty students (convocation attendance is always mandatory):

17/ For Lahren, the sticking point seemed to be her pro-choice stance. As one student put it: "…most students here are hardcore pro lifers and for some it’s really one of the few issues they care about."

Oh, and Lahren is happy to boast she is “not a reader” and doesn’t “read long books,” which alone should disqualify her from speaking at a ceremony at an educational institution.

Next is Ray Rice, a former NFL player famous for a video showing him in an elevator, punching his then-fiancée so hard that he knocked her out. After slamming her head into the wall, Rice is then seen dragging her limp body halfway out of the elevator, face down.

Since that moment in 2014, Rice has become both the poster child for and an advocate against domestic violence, and his fiancée became his wife. David Nasser, the Liberty vice president whose department announced the speaker selections, said Rice plans to “talk about how the Gospel affords him a chance to redeem his life. Certainly, the consequences are still there; he’s not playing in the NFL anytime soon — or ever — but that doesn’t mean that God can’t restore a life or a marriage.”

Rice’s story of repentance may well be authentic — I can’t know what has changed in his heart and relationship — and for that reason, I’m less willing to categorically say it’s inappropriate to invite him. Still, it’s not hard to see why students would be unhappy he’s coming. Here’s what one had to say:

11/ She added: “Sorry” didn’t heal his wife’s bones. We cannot defend someone’s actions because they are “repentant.” These convocation services are still mandatory for all students, and to talk about (political) freedom is hypocritical."

RELATED: Some people are uncomfortable with the way Corey Lewandowski talks about First Lady Melania Trump

Personally, I find it odd that Nasser’s office would choose a photo of Rice in his NFL uniform if his invitation is about repentance more than pro-sports fame.

Finally, Lewandowski. If you can’t quite place the name, let me remind you that Corey Lewandowski is the fired Trump campaign manager who violently manhandled a Breitbart News reporter, Michelle Fields, at a rally, leaving a bruise. He then called her “delusional” and refused to apologize for his actions, claiming he’d never even touched her until a video of the encounter emerged.

A subsequent Politico report based on interviews with 20 sources who had contact with Lewandowski on the campaign trail and in other contexts found he was known for “being rough with reporters and sexually suggestive with female journalists, while profanely berating conservative officials and co-workers he deemed to be challenging his authority.”

That does not fit well with Liberty’s stated mission of mission of encouraging students’ “commitment to the Christian life, one of personal integrity, sensitivity to the needs of others, social responsibility and active communication of the Christian faith.” Where Rice speaks of repentance, Lewandowski makes no such claims.

It is certainly true, as Philip Wegmann writes at The Washington Examiner, that Jesus “hung out with tax collectors, prostitutes, and sinners of all stripes,” and we Christians are called to do the same. But, Wegmann adds, Jesus “never invited the unrepentant to minister to the impressionable” in mandatory convocation meetings, nor did he evince the love of “celebrity and sensationalism” that appears to be at play in these choices.

To retain any shred of credibility for its institutional witness, Liberty should not honor Lahren and Lewandowski as convocation speakers, and it should at least carefully consider the content, format, and mandatory attendance of Rice’s address. Sadly, Falwell’s record of idolatrous hope in Trump and, by extension, those who support him, make such a reversal unlikely.