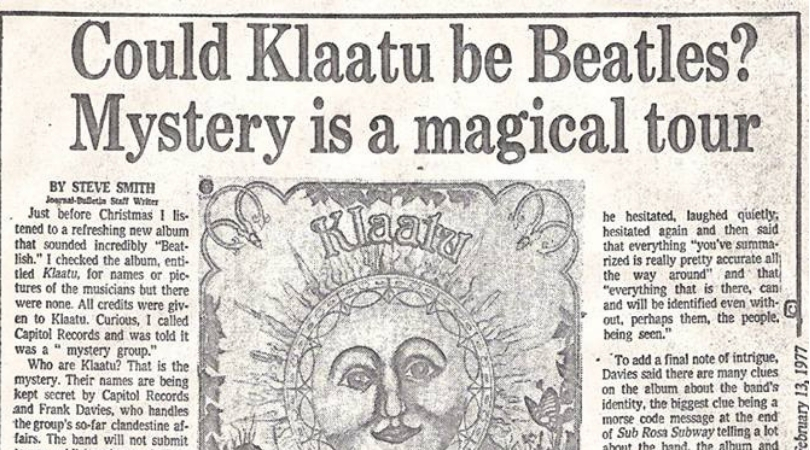 The story goes like this, in 1973 a few Canadian studio musicians happened to meet and started a progressive rock band together. They called themselves “Klaatu” after a character from a sci-fi film called The Day the Earth Stood Still. Their sound was a blend of prog rock, pop, and art-rock. Their formation was right around the time that The Beatles split up, and their fans were still hoping for and still circulating rumors that they would get back together. This and many other factors contributed to the Klaatu snafu.

In 1975, the band’s producer Terry Brown helped them get signed to  Capitol Records. The members of Klaatu, Terry Draper, Dee Long, and John Woloschuk released their first album the following fall. Frank Davies, founder of Daffodil Records worked as their manager at the time. When Klaatu’s first album, 3:47 EST, was released, the band decided not to reveal their identities with names or images on the album or any promo material.

The band gave no interviews and didn’t tour since they all worked “regular jobs” and the music they were making would be very hard to play live with just three people. The only credit they allowed was a little footnote on their record saying that songs were “written by Klaatu”.

The band claims that they simply wanted to keep their anonymity and let the focus be put on the music. The album performed well and some of their most popular hits are from around this time of their career. These hits included “Anus of Uranus/Sub-Rosa Subway”, “True Life Hero”, and “California Jam” which hit No. 36 on the Canadian Top 40 charts were all well received.

Fuel to the Fire

Rumors started sometime towards the end of 1976 that Klaatu was actually The Beatles. The biggest reasoning was because of the similar vocal and musical stylings, especially on “Sub-Rosa Subway”. Further, the fact that it was released on Capitol Records added fuel to the fire. Things later got even more suspicious  Steve Smith, who worked for a Rhode Island Newspaper The Providence Journal, wrote an article titled  “Could Klaatu Be Beatles? Mystery is a Magical Tour” in February of the following year.

This article caused people to go a little nuts. The album sales increased because everyone wanted to know if The Beatles had reunited for this secret project.Speculations continued to rise and people were creating their own breadcrumb trails for how Klaatu had to be The Beatles. For example:

You can read some more conspiracy theories here. While all of this was happening, Klaatu was barely aware of the situation. They thought it was a joke. They were mostly minding their own business in England, recording their second album, Hope, which was released in fall 1977. They were almost completely unaware that everyone was clamoring for their identities, and that Billboard, magazines, radio stations and Beatles fans were all discussing them nonstop.

Their popularity skyrocketed then. Two of their songs were even covered by The Carpenters. In turn, pushing “Calling Occupants of Interplanetary Craft” into a top 40 spot. Even The Beatles caught wind of the situation. Paul McCartney reportedly had a “good laugh”.

By the time their third album was released and their identities had been discovered by a radio station Program director in Washington DC, they were seen almost as a joke. The world was mad they weren’t The Beatles and felt the band had been trying to trick them. Klaatu paid the price. They were then pushed by their label to do interviews and a tour and essentially write pop albums.

When a Capitol marketing employee threatened to quit after they were told to promote the album, after that it was all downhill. Tours only sold because people wanted to see the people who impersonated the Beatles and with poor album sales, the label eventually dropped them. Klaatu did continue to make music, but their shot was blown essentially.

Editor’s note: This article was originally published on November 13, 2019.

Watch: These Vintage Vinyl Record Carrying Cases Will Take You Back in Time