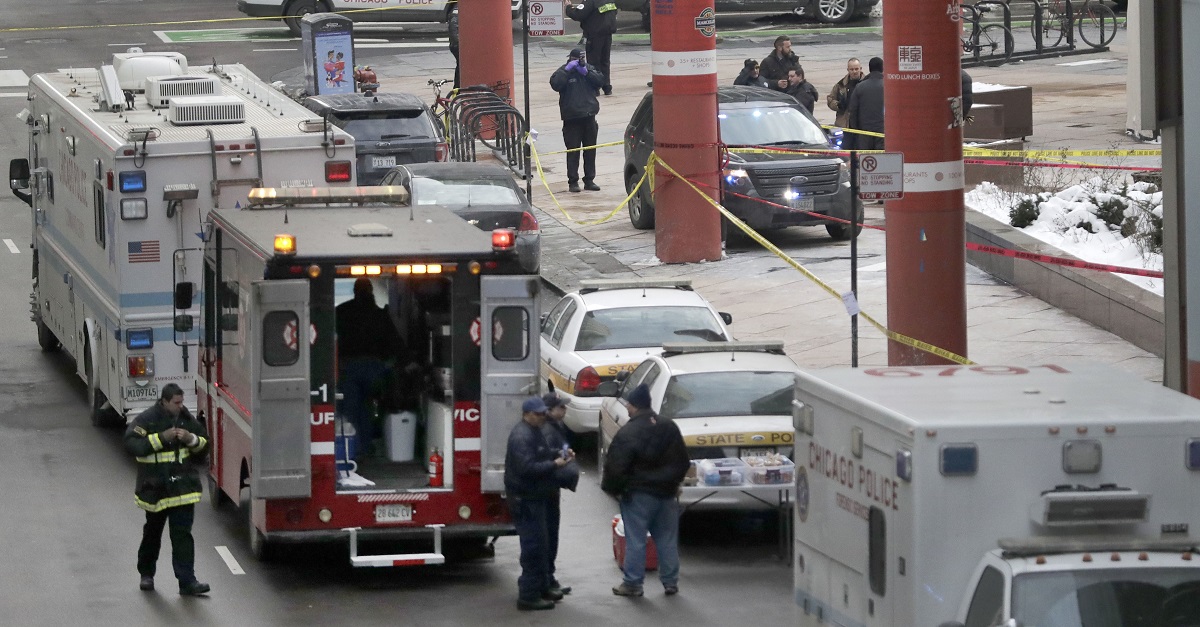 A memorial outside the Near North district station at 1160 N Larrabee is growing for the slain police officer who was killed at the Thompson Center on Tuesday afternoon.

Commander Paul Bauer chased down a man that tactical officers were previously trying to stop. Bauer confronted the suspect but after a struggle, he fired a gun at the 31-year department veteran and killed him.

Before the shooting, an officer can be heard on a police scanner saying, “Don’t anybody get hurt. We just wanted to do a street stop on him.”

According to department spokesman Anthony Guglielmi, Bauer heard the scanner traffic, saw a man matching the description, and decided to pursue.

Officers later apprehended the suspect who is a four-time felon with an arrest record that goes back to 1994. The suspect has not been formally charged as of this writing.

“Let’s not forget the legacy of Commander Paul Bauer. He gave his life for the protection of this city,” said Police Superintendent Eddie Johnson. “I just ask the citizens of this city to keep the Bauer family in their prayers.”

Bauer had often expressed his concern for the growing violence in Chicago, particularly of that by repeat offenders. “We’re not talking about the guy who stole a loaf of bread from the store to feed his family,” he said in November 2017. “We’re talking about career robbers, burglars, drug dealers. These are all crimes against the community. They need to be off the street.”

Bauer will be remembered for his dedicated life to family and community service.

He leaves behind a wife and a 13-year-old daughter. His neighbors in the Bridgeport neighborhood spoke highly of him and could always depend on him to help out with everyday tasks, particularly with helping clear sidewalks after the recent snowstorm.

He also hosted “Coffee with a Commander” meetings, an informal monthly gathering to provide the police department to do community outreach and interact with the citizens.

In a statement, the mayor added, “Commander Bauer stood for the highest ideals of our police department and our city — to serve and protect the people of Chicago.”

“The idea that Paul would act so unselfishly and would sacrifice his own safety for the safety of the people of Chicago and his fellow officers comes as no surprise to those of us who knew him,” said a statement from the Chicago Police Memorial Foundation.

A police procession went through the city on Tuesday as well.

Bauer is the first Chicago police officer shot and killed since 2011 and is one of the highest ranking officers to be killed in decades.

Those looking to express their condolences can do so on an online guest book.