Menu
Follow us
Search
Menu
Search
Passengers take in the sights as they head east down the Chicago River during an architectural boat tour of Chicago Saturday, May 3, 2008. From soaring skyscrapers to basic bungalows, the city's varied architecture has earned the city a reputation that attracts visitors to the city seeking examples of what famous designer Daniel Burnham called his "Paris on the prairie." In the center background is the nearly-completed Trump International Hotel & Tower. (AP Photo/Nam Y. Huh)

Fire crews were at the scene of a Level 2 Hazmat an office building located in the Loop downtown. 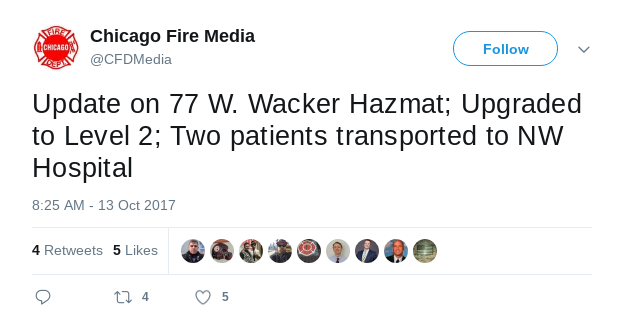 The chlorine leak was reported just after 10 a.m. Friday on the roof of a building located at 77 W. Wacker.

The Hazmat was quickly upgraded to a Level 2.

The Chicago Fire Department reports six people have been transported to Northwestern Hospital and one person refused.